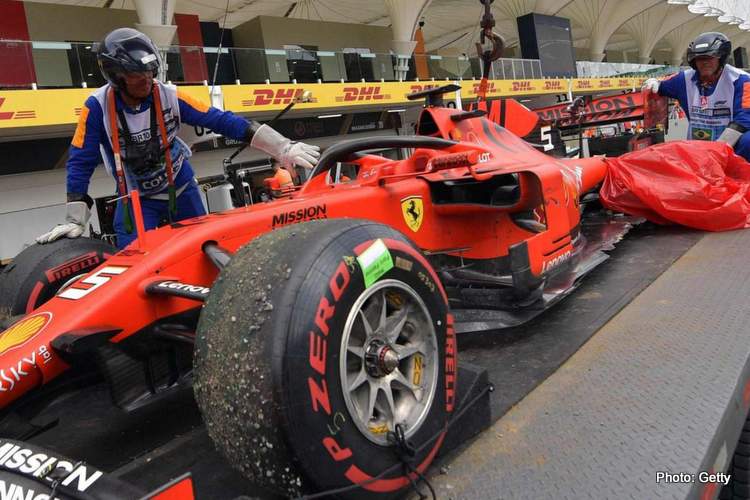 Two Ferraris have often crashed together in Formula 1, but that has invariably been the result of a separate issue — like Lauda and Regazzoni taken out by a Brambilla-Andretti clash, or Kimi and Vettel rendered hors d’combat after Seb’s tangle with Max. I don’t ever recall two Ferrari drivers taking each other out though?

Teammates have never been immune from clashing — McLaren’s Prost vs. Senna most famously in Japan ’89, Hakkinen and Coulthard again for McLaren in Austria ten years later, Jordan’s Fisichella and Ralf Schumacher in Argentina ’97; Montoya and repeat offender Ralf in the US in ’02 and more recently, Mercedes’ Rosberg and Hamilton, properly the second time around in Spain 2016. Don’t forget Webber and our latest repeat offender, Vettel in Turkey 2010.

Feuding teammates are noting new either — and boy, has Ferrari had its fair share — Prost vs. Mansell and Villeneuve and Pironi’s tragic spat, to name but two. Sadly, these things always end up in tears.

Now add to our little pot of collusion, a few more factors; like Italy and its press fed up with Ferrari, its drivers and management. Finger-pointing is at its best at times like this, no?

And then there is all the other stuff allegedly going down in that paddock and beyond. This Penske-Mercedes malarkey for instance. If that is real, significant winds will blow change through that silver cloud and with a soon out of contract Lewis — and even Toto appearing a bit bored with all this winning they’ve been doing lately, would both not want a real new challenge?

What about that eternal Ferrari critic Flav and his chosen Spanish son — has he not just now suggested a return to the Scuderia as one of Fernando’s few F1 options? So, what are the chances of Hamilton and Wolff descending on Maranello — or even more bizarrely, Alonso and Briatore? And all of them? I’m nuts you say?

Well, stranger things have happened in F1 and remember two things here — one, Briatore was the architect of the Schumacher era Ferrari Superteam back at Benetton and it was he who beat Maranello at the end of it — with Alonso, of course. And then those silver guys… well they just won five world titles together, so why not opt for a fresh conquest to actually break all those records dressed in red…?

Somehow, I cannot see today’s line-up strapping into those radical new Ferraris in 2021 — possibly one, definitely not both drivers. And you can probably factor in (another) fundamental change in management at Maranello. Nor can I see too may other proper options beyond the bickering duo who are there now, Hamilton and Alonso. Or perhaps Ricciardo.

If change must happen, it should be radical — just like it was when Briatore’s Benetton Superteam upped camp and headed to Ferrari to commence the previous golden era…

One thing is for sure though, judging by the several case studies we have based on similar F1 team acrimony over the seasons, the wedge dividing Ferrari is right now is likely to soon cut through it — these things always end in tears for one driver or the other, if not both. Especially down Maranello way…

So being, a mellowed Hamilton and his new friend Alonso in a new Ferrari ’21 Superteam may not seem so daft after all…