Binotto and Horner square up over cheating allegations 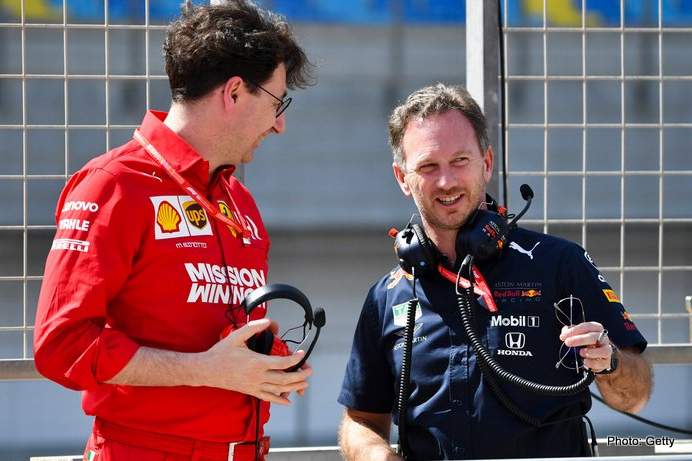 Ferrari boss Mattia Binotto confronted his Red Bull rival Christian Horner after the United States Grand Prix and threatened him with legal action, according to the Spanish source Motorlat.

Other photographic evidence emerging in the wake of the Austin race appear to back up correspondent Yhacbec Lopez’s claim about the Ferrari chief’s fury.

The normally calm Binotto was enraged after Austin when Red Bull-Honda driver Max Verstappen said Ferrari had been caught “cheating” with its engine.

Yhacbec Lopez, an accredited report for MotorLat, confirmed, “We saw English journalists in a meeting with Christian Horner and the tension in the air was thick and could be cut with a knife.

“I was standing outside the Red Bull hospitality when I saw Mattia Binotto walk in front of the group of journalists chatting with Horner. Mattia took a close look and returned to the Ferrari hospitality only to return a few minutes later.

“By now, the Red Bull boss was ending his conversation with the journalists when Mattia returned to confront Horner. The pair immediately began a clear and blunt exchange at the entrance of the hospitality.

“Mattia had gone to look for Horner and started to speak to him firmly and what I managed to hear was a warning about legal action. Horner explained that he only shared his opinions. Mattia replied angrily, and as the volume of the discussion went up so did the tension between the two,” added Lopez.