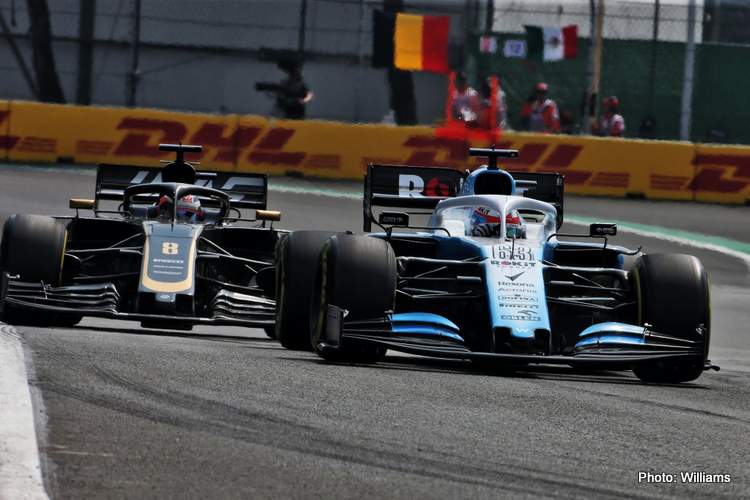 Williams report from Sunday at the Mexican Grand Prix, round 18 of the 2019 FIA Formula One World Championship.

Dave Robson, Senior Race Engineer: George made a good start and made up places through T1/2/3. Unfortunately, he lost these later in the opening lap and this set the tone for his race. Had he been able to stay ahead for the opening lap then his underlying pace would have given him a good opportunity to stay ahead to the end.

For Robert, the car and tyres were much better today, and he was able to get ahead of George and stay there until a puncture forced him to make an unscheduled pitstop. This was a great shame for Robert as he had strong pace and demonstrated some excellent race craft.

We raced well today and made the most of the car that we had. We will, of course, review each decision that we made and determine if we could’ve made a better choice, but overall, we did a sound job of managing the car in the challenging conditions of Mexico.

We now turn our attention to next week and the exciting prospect of racing in Austin. We are expecting a busy Friday with an additional set of 2020 tyres available for both cars. We also look forward to having Nicholas back in the car for FP1.

George Russell: I made a great start and through turns one, two, and three I was in the right place at the right time and gained a load of positions. For turns four, five, and six though I was in the wrong place at the wrong time and lost them all. I spent most of the race right behind Robert, but I think he had a problem near the end and had to do an additional pitstop. In the final 10 laps I was in clear air and the pace was extremely strong, so if I’d managed to hold onto those positions after the first few corners then I could have maintained them. A bit of a missed opportunity and we should have finished higher.

Robert Kubica: The feeling in the car was much better than yesterday. I managed to make good decisions in the battles, there was a lot going on and I gained a couple of positions at the start. George managed to get in front of me as I had a long pitstop, but then I managed to overtake him. It was unfortunate that I had to stop for the second time because of a slow puncture. Thanks for the support from the Mexican fans, it was an amazing atmosphere today.