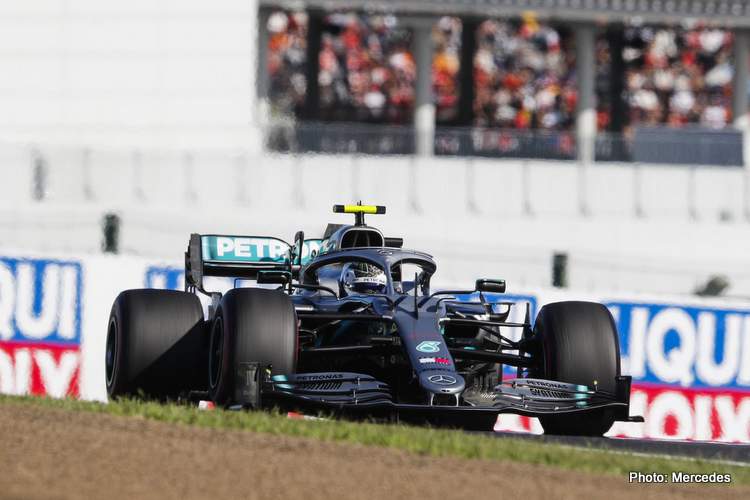 Squandering another strong performance in qualifying, Ferrari were forced to watch on as Valtteri Bottas led Mercedes to their sixth-consecutive world championship at Suzuka on Sunday.

Taking full advantage of a disastrous start for both Scuderia drivers, Bottas managed to score his third victory of the season in an intriguing race that officially made Mercedes the 2019 world constructor’s champions.

Thirteen seconds ahead of pole-sitter Sebastian Vettel at the flag, Bottas went from third on the grid to leading into the first corner after a costly mistake by the German that saw him prematurely start, stop again, and lose his launch off the line.

A victory that had been a long time coming, it was the first time the Finn had stood on the top step of the podium since the Azerbaijan GP, 13 races ago.

“I’m very happy. I had a really nice start. The pace was super good. I could control the race. I’m really proud to be part of the team. A sixth title is really impressive” Bottas said afterwards.

For his part, Vettel was quick to accept responsibility for his mistake, branding it “worse than a poor start, it was a really poor start.”

However, the German also paid tribute to the performance of his rivals, suggesting “second place today was probably the maximum.”

Vettel nevertheless managed to hold-off a charging Lewis Hamilton in the closing laps, with the Briton noticeably subdued at the finish after his race was subjected to some curious strategy decisions.

Initially put on a one-stop strategy while Bottas was given a two-stopper. Hamilton was the source of several testy exchanges on team radio amidst uncertainty over whether he could make it to the end of the race.

Still leading but with Bottas and Vettel closing, the decision was made to pit Hamilton again on lap 43, giving him fresh softs with which he could attack Vettel, ultimately to no avail.

Nevertheless, the day was nothing short of a triumph for the Silver Arrows, although while it was Vettel that handed them the lead, it was his teammate Charles Leclerc that gave them the championship.

Having started second, the Monegasque relegated himself and Max Verstappen to the back of the grid after moving across from the inside to collect the Red Bull driver at the second corner of the race. Despite managing to recover to sixth at the flag, the incident made it impossible to collect enough points to keep the constructor’s fight going.

For a fuming Verstappen, the incident ultimately caused too much damage for him to continue, his race over on lap 15. As things stand, Leclerc is yet to receive a penalty, but both drivers are scheduled to report to the stewards an hour after the race.

In the absence of his Red Bull teammate, Alexander Albon did an admirable job filling in, earning himself a career-high fourth-place finish.

McLaren’s Carlos Sainz was fifth, ahead of the aforementioned Leclerc in a performance that backed-up his impressive effort in Sochi.

Renault’s Daniel Ricciardo had a trademark day to finish seventh, passing several cars to come through from P16 on the grid.

Sergio Perez took ninth despite crashing his Racing Point on the final lap, benefiting from the race classification being revised from 53 to 52 laps.

Lance Stroll came home 11th in the sister Racing Point, enduring a relatively static afternoon. Daniil Kvyat was alongside him in 12th.

Lando Norris endured a dismal afternoon in comparison to his McLaren teammate Sainz, only managing 13th. Kimi Raikkonen went backwards one place from his starting spot to finish fourteenth, albeit still ahead of teammate Antonio Giovinazzi, who had out-qualified him.

Romain Grosjean was 15th despite starting tenth on the grid, his Haas once again unable to offer similar race performance to that seen in qualifying.

The aforementioned Giovinazzi was 16th, 18 seconds behind Grosjean in a horror afternoon for the Italian.

The Williams pair of George Russell and Robert Kubica brought up the rear, 18th and 19th respectively.

When the lights went out for the start it was Bottas who reacted quickest. He rounded the slow-starting Ferraris of pole-sitter Vettel and Leclerc and stole the lead metres after the starting line.

Initially, it looked like Vettel might have moved outside his grid slot before the lights went out, but the German was eventually cleared of any wrongdoing by the race stewards.

Having lost out off the line, Vettel slotted into second place and third-placed Leclerc immediately came under pressure from Verstappen. The Dutch driver tried to overtake the Monegasque racer around the outside of Turn 1 but there was contact and Max was bounced off track. The Red Bull driver recovered as quickly as possible and rejoined but it was at the back of the field.

Behind the leaders Albon in the second Red Bull also got away poorly from sixth on the grid. As he bogged down, he was passed by both McLaren drivers and by the end of lap one found himself in seventh place.

Albon was soon on the attack and on lap four he muscled his way past Norris through the final chicane. Norris protested that he had been forced off track in the incident but the stewards eventually ruled that no further action was necessary.

Ahead, Leclerc carried on in P3 but eventually gave in to the deteriorating state of his car and on lap three he pitted for a new nose cone and a set of medium tyres. He emerged at the back of the field and began to carve his way forward, rising to P13 by lap 14 as he dismissed the slower cars ahead.

Verstappen, though, was struggling. The Dutch driver reported that his car was “moving massively under braking” following the clash with Leclerc and later that his tyres had been flat-spotted as a result. Eventually the battle became too much and after 14 laps the Red Bull driver retired from the race.

With Leclerc and Max out of the reckoning, Albon was now fifth, but bottled up behind Sainz, who was doing a good job of defending his position.

Albon rose through the field again and regained P5 by lap 21 where he again came across Sainz who was eking out a long first stint as he pursued one-stop strategy. Eventually the Spanish driver finally peeled off towards the pit entry for his sole stop of the race on lap 26 and Albon began to carve out a gap ahead of his second stop.

At the front Vettel was now coming under pressure from Hamilton. Ferrari therefore pitted the German for a second time on lap 31. He took on medium tyres and rejoined in third, 20 seconds behind the championship leader.

Bottas made his second stop on lap 36 and took on a set of soft tyres. Hamilton assumed the lead of the race and there were nervous moments for the Finn as Hamilton seemed comfortable on his medium tyres and it looked as if he would chase a one-stop race to victory.

Eventually, however, Mercedes called the Briton to the pit lane and after bolting on a set of softs on lap 42 he emerged five seconds behind second-place Vettel.

That gap was erased with four laps to go and the championship leader began to pressure the German. Vettel, though, had a pace advantage on the straights and he was able to keep the Mercedes man at bay in the closing stages.

Sainz took fifth for McLaren, while Leclerc clawed his way back to sixth place at the flag. Ricciardo put in a good performance to rise to seventh from P16 on the grid, while Gasly scored good points for Toro Rosso with eighth place, though he was placed under investigation after the race for a later move on Pérez who was classified ninth but who crashed out on the final tour as a result of the clash.

Leclerc received a ten seconds penalty and thus dropped a position to seventh, which promote Renault’s Daniel Ricciardo to sixth while the final point went to his teammate Nico Hulkenberg. Racing Point protested the legality of the French team’s car after the race.

Mercedes, with 612 points to the team’s name, have now established an unassailable lead in the Constructors’ Championship and are thus set to be crowned champions at season’s end. Ferrari lie second with 435 points, with Red Bull currently third on 323 points. 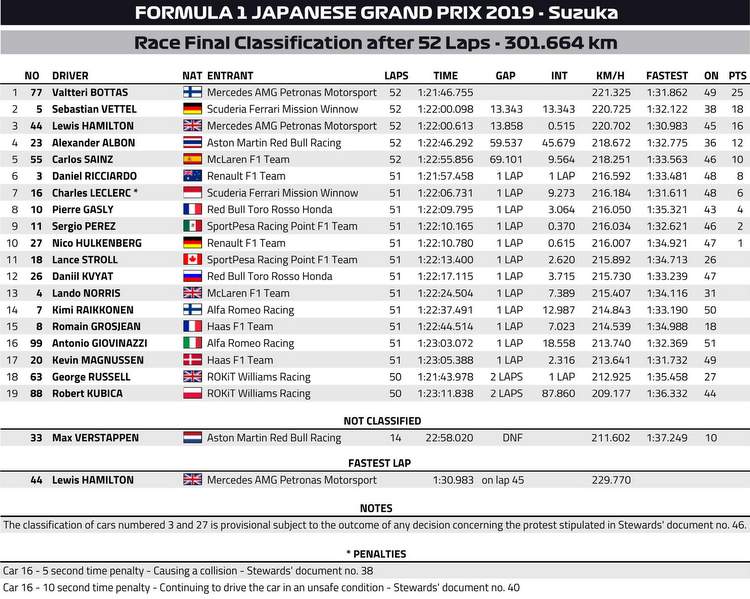 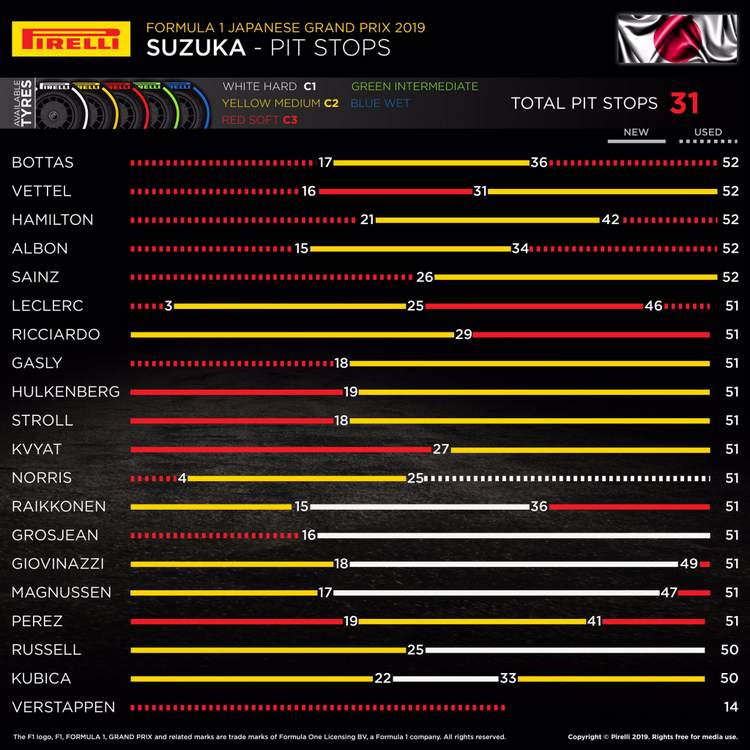 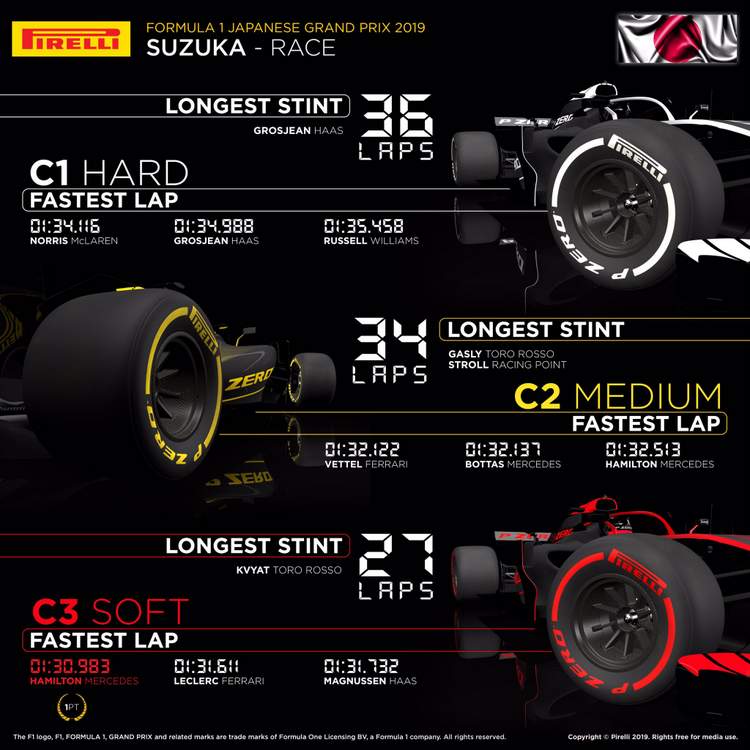 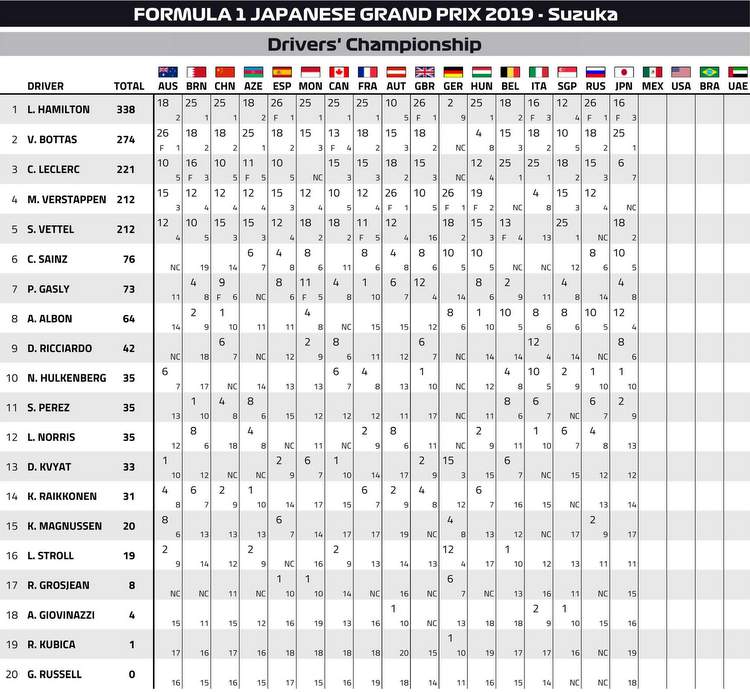 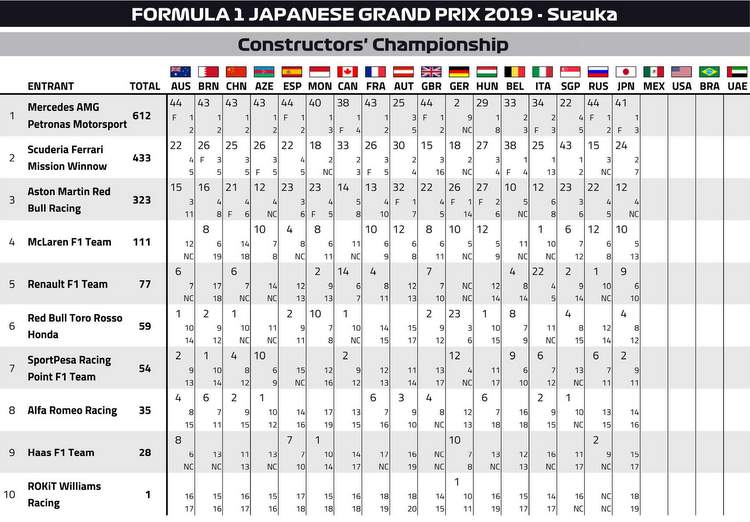