Hamilton: It’s about having respect 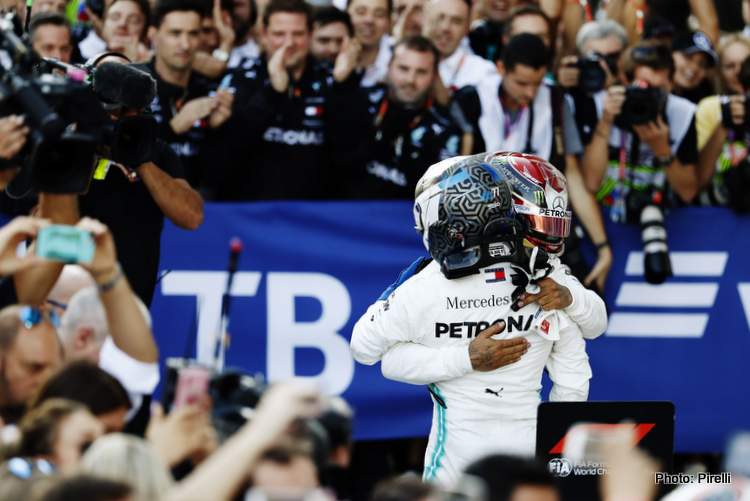 The Mercedes driver won at Sochi, where Vettel had refused to obey a team order to let his teammate Leclerc through. As the Reds tripped up in broad daylight, Hamilton kept up the pressure and when it mattered the race victory was all but handed to him with teammate Valtteri Bottas second.

This prompted Hamilton to point out that he and Bottas have a different dynamic to their rivals, “I mean we work together, so it’s about having respect.”

“We talk about scenarios very openly. Valtteri has always been respectful in all those scenarios and I think it’s vital that we both act accordingly, which we do.”

After Sochi, Hamilton has moved himself into a position to clinch the championship before the season ends, “I say this every season, but I try not to think too much about the championship. One race, one step at a time. We don’t want to stumble.”

The 34-year-old also gave a clear indication that he would like to extend his stay in Formula 1 beyond his 2020 contract.

Hamilton said getting involved to help Liberty Media and the FIA to craft the 2021 rules has been “a huge step”.

“I think it looks great, so I’m working as hard as I can to make sure I can stay around and get to drive those newer cars,” said the Briton.

In closing, it should be mentioned that it has not always been harmony, love and peace in the Silver Arrows camp.

When Hamilton joined Mercedes in 2013 his teammate was Nico Rosberg. The duo were friends from youth and the camaraderie carried through to Formula 1.

However, when they shared the silver garage, it did not take long for it to become open warfare between the pair, so much so that Hamilton continues to snub Rosberg who quit the sport a couple of days after clinching the 2016 F1 title in the wake of their bitter season-long battle.

Big Question: Why is there harmony at Mercedes these days?