Sochi Qualifying: Leclerc blows them away 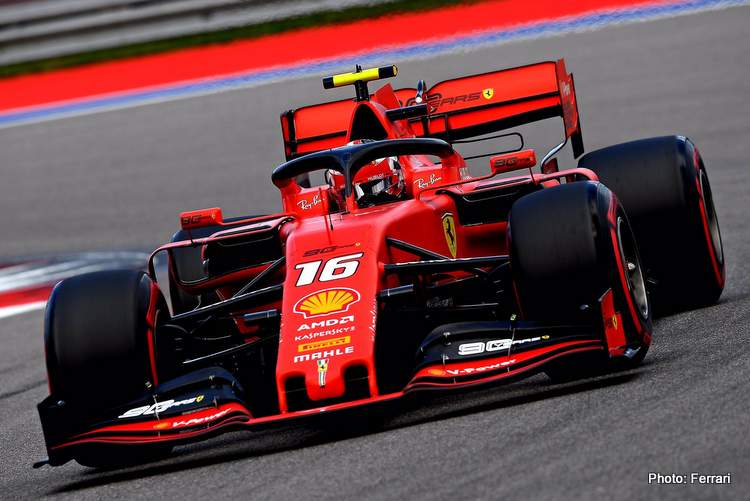 For the fourth race in succession, Ferrari driver Charles Leclerc claimed pole position – this time for the Russian Grand Prix – doing the business in qualifying yet again by a handy margin. 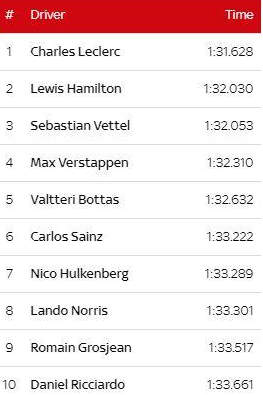 Leclerc’s best effort of 1:31.628 was faster than his first which was good enough for pole anyway. Lewis Hamilton dug deep to split the Ferrari duo albeit four-tenths of a second down on the pole-winning time.

After two stunning efforts on the afternoon, Leclerc had the humility to criticise himself for messing up the final corner as he crossed the line to take pole and obliterate his rivals in the process.

Not since 2001, when Michael Schumacher accomplished the feat, has a Ferrari driver scored four top spot starts in succession. Leclerc was three-years-old at the time!

The Monegasque is proving to be the rare kind of driver that can raise his game on demand, find laps other more mortals can only admire while flirting with the ultra-fine edge of sensation and bent metal. The kid has come of age and this is only the beginning.

A supreme talent who has signalled his intent and is jolting Ferrari out of too many years of mediocrity, to the reverence of the tifosi who finally have their next real hero.

Leclerc said afterwards, “The car felt amazing. It definitely feels great to be back on pole but I don’t know if it’s the best track to start on pole, the straight is very long after the start. The start will be very important as always but here probably even more because of the straight length.

“It definitely feels very, very special [four poles in a row]. But I don’t really want to think about those stats for now. I just want to focus on the job and there’s definitely a long way to go tomorrow,” added the race winner.

Hamilton denied Ferrari an all-red front row by 0.023 of a second, with Sebastian Vettel third fastest – the gulf to his teammate 0.425 of a second.

The World Champion was happy with his lap, “It was a tough qualifying session because these guys [Ferrari] have some crazy speeds on the straights. They go to another level. That party mode you spoke about us having, they have something else beyond that – jet mode.

“I gave it absolutely everything I had at the end and the team did a great job just to tinker and push forwards. I’m so glad it came together – I wasn’t expecting to get on the front row, that’s for sure. I’m really, really happy with it.

“We’ve got to try something [strategy]. We were fortunate enough to opt for a different strategy. It’s a long way down to Turn One which is not always the best for starts on the harder tyre, but I’m going to try and toe the life out of Charles if I get the chance,” added Hamilton.

Vettel has had no answer to his teammate since the Canadian Grand Prix, the younger Scuderia getting faster with every outing. The near half-second gap will be a concern for the elder statesman in the team.

The German summed up his session, “Obviously I’m not entirely happy. I couldn’t extract the maximum out of the car. It was a bit disruptive in Q1 but by the time we got to Q3 I thought it was OK. It’s a long way to Turn 1 and we’re on a different tyre strategy to the Mercs. The speed is there so let’s keep it up.”

Max Verstappen was fourth fastest, albeit nearly seven-tenths down on the top time and with the five-place grid penalty, he should line-up in ninth. His teammate Alex Albon crashed in Q1, the Thai driver struggling all weekend thus far.

Fifth fastest on the timesheets was Valtteri Bottas who aborted his final run and as a result was only good for fifth and a whopping second down on the top time, six tenths off teammate Hamilton.

Carlos Sainz’s last effort in qualifying was also his finest as he claimed sixth-place for McLaren and Best of the Rest. Behind the Spaniard, Nico Hulkenberg was seventh in the Renault, followed by Lando Norris in the other McLaren – the trio separated by less than a tenth of a second.

Romain Grosjean got the most out of the temperamental Haas package to claim ninth-place on the timing screens, with Daniel Ricciardo rounding out the top ten.

Q1 got underway with Leclerc setting the pace on medium tyres. The Monegasque driver logged a time of 1:33.613 to top the timesheet but Hamilton took over in P1 on soft tyres with a lap of 1:33.230.

Verstappen and Albon then took to the circuit and Verstappen immediately jumped to second place with a lap just 0.138 slower than Hamilton’s early table topper. Albon’s opening run was compromised, however, when Kubica spun ahead of him and he was forced to make another attempt. It ended early, however, when the Thai driver lost the rear end of his RB15 in Turn 13 and he slid into the barriers and out of the session.

The red flags were shown and on the resumption, Vettel, who had earlier also had a moment at Turn 13, went out on soft tyres. He jumped to the top of the timesheet with a lap of 1:33.032. That stood as the benchmark until the flag as Leclerc, Verstappen and both Mercedes drivers sat out the remainder of the session.

Eliminated at the end of the session, however, were 16th-placed Alfa Romeo driver Kimi Räikkönen, Williams pair Russell and Kubica and Albon. Already facing a back-of-the-grid start due to replacing PU elements and having suffered another PU problem in final practice, Kvyat did not take part in the session.

In the second session, Leclerc led the way, with the Monegasque claiming top spot with his first run before shaving more time off to hold the position after the second run thanks to a lap of 1:32.434.

Vettel was closer to his team-mate this time, finishing the segment just 0.102s behind the younger Ferrari driver and Verstappen progressed to Q3 in third place with a lap of 1:32.634, two-tenths of a second off the P1 pace.

Eliminated at this point were 11th-placed Gasly followed by Pérez, Giovinazzi and Stroll.

And after he had topped the opening two segments of qualifying there was to be no denying Leclerc in the final top-10 shoot out. Vettel began his first flying lap strongly but a very quick final sector saw Leclerc take provisional pole with a lap of 1:31.801, three tenths ahead of the German.

Hamilton was fourth ahead of Bottas, while Verstappen lost the rear end slightly through the final turn of his lap and the error saw him slot into fifth place.

Behind the Finn, sixth place in the session went to Sainz with Hulkenberg in seventh. Norris was eighth ahead of Grosjean and the final top-ten place went to Ricciardo. 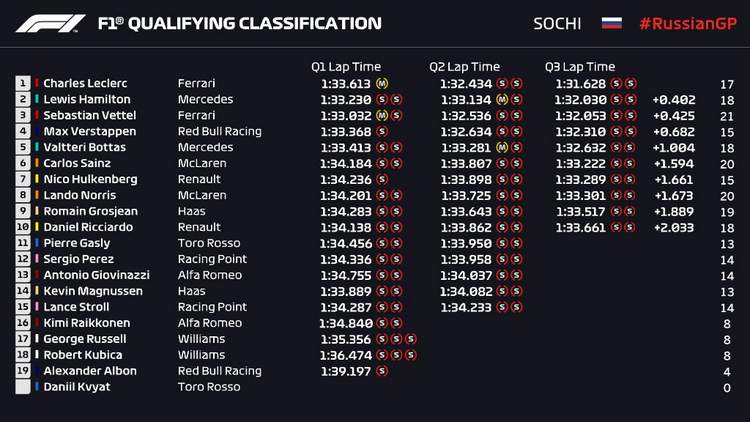