Vettel: People’s support gave me a lot of strength 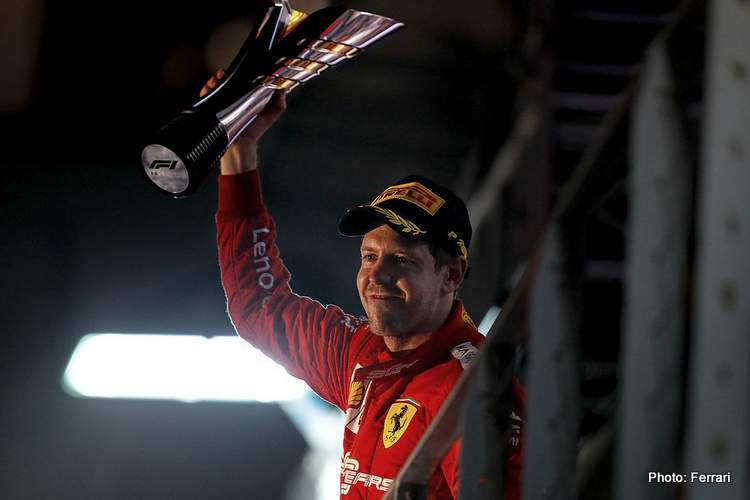 Ferrari driver Sebastian Vettel broke a 392-day winless spell in Formula 1 when he powered to an unexpected victory at a tense and intriguing Singapore Grand Prix.

In doing so Vettel became the only man to have won at Marina Bay five times and it would fair to say this might have been the sweetest of all the of them, and he desperately needed it.

The 13-months since he was victorious at Spa-Francorchamps last year have been marred by numerous incidents and self-inflicted errors which attracted scathing criticism from media, pundits and former drivers. His commitment to the sport and future at Ferrari were thrust in the spotlight as the four-time F1 World Champion struggled to arrest his decline. Until Sunday night in Singapore that is.

He admitted after his 53rd Grand Prix victory, “The last couple of weeks have been not the best but it’s been incredible, to be honest, to get so much support, so many letters, so many nice messages, people telling their own stories when things might not go well and so on so it gave me a lot of strength, belief, and I tried to put it all into the track today, into the car and it’s nice when it pays off.”

Vettel won the race thanks to an early pit stop which enabled him to undercut his teammate Charles Leclerc who had controlled proceedings from pole position but paid the price for not upping the ante when the #5 Ferrari nipped into the pits on lap 19 of the 51-lap race.

The German explained the decision to pit early, “It was a very late call obviously. I thought it was a bit early because I wasn’t sure whether we could make the tyres last in the second stint but obviously I gave it everything in the out-lap because I saw the two cars in front of me not pitting

“Then it’s been quite busy managing the tyres, going through traffic. I was trying to go through and slice through as quick as I can maybe to get a cushion and control it at the end. The car was getting better and better. Was tricky at the restarts with cold tyres but as the first car, you have a bit of an advantage.”

Ferrari were not expected to have race-winning performance around the twisty 5-km street circuit and perhaps even surprised themselves by claiming pole too. Nevertheless, it appears that the secrets of the SF90 are unravelling to the engineers at Maranello and their latest updates hit the nail on the head.

A far cry from earlier in the season when nothing they brought along, in terms of updates, appeared to work and at times they even appeared to go backwards. But someone found the sweetspot in the past few months.

Vettel acknowledged, “Big congratulations to the team. Obviously, the start of the season’s been difficult for us, but in recent weeks I think we started to come alive. So really proud of everyone’s work back home.”

Big Question: Is Seb back?