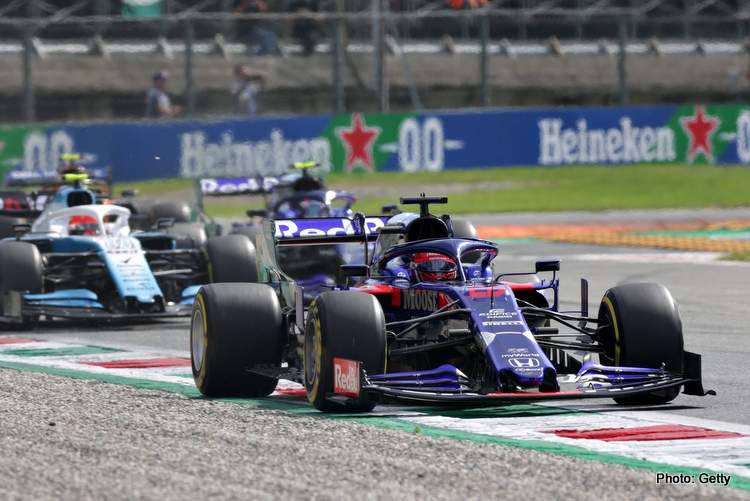 Toro Rosso report from the Italian Grand Prix, Round 14 of the 2018 Formula 1 World Championship, at Monza.

Pierre Gasly, 11th: “Starting from P17 we knew we had a tough race ahead of us. It was quite an eventful day, we had a really good start and ended the first laps in 13th position. Things were looking pretty good until Stroll went off the track and re-joined just as I was passing, so I had to avoid him by going into the gravel and lost two positions and a lot of time. It cost us at the end of the race, as we finished only three seconds from P9. It wasn’t ideal, but I think we showed some good performance all weekend and we had the pace to finish in the points starting from the back of the grid. I’m looking forward to a clean weekend in Singapore without any penalties to be able to extract the most I can there.”

Daniil Kvyat, DNF: “It was shaping up to be an amazing race today, we were fighting Red Bull Racing at the time of my retirement, so good points were on the table for us. However, this is our sport, unfortunately, and sometimes you can do a great job but something in the car gives up and you have to pull over. I was putting in the same lap times with those around me and was on fresher tyres, so I was confident I could finish well inside the top 10. It’s a big shame to miss out on valuable points, but we have been having quite a few strong Sundays lately, so we know we can fight for good results. Let’s think of Singapore now.”

Jonathan Eddolls, Chief Race Engineer: “It was a frustrating afternoon for us as a team. We had a car that showed tremendous pace when we were in clear air and we were capable of scoring some pretty big points. Our first laps were good and we managed to take advantage of a few incidents. Unfortunately for Pierre, he lost a lot of time having to run off track to avoid a collision with Stroll as he was coming back onto the track. That cost Pierre some positions and potential for a better result. As for Dany, he had a really strong race, we planned to go long and use the pace of the car in the middle of the race in clear air, and he was pushing hard. The virtual safety car came at the right time, so we pitted both cars and would have taken a big advantage from that, but once Dany left the pits we saw some smoke and then in the data we realized he had an oil leak. We decided to stop him on track to preserve the car for future races. It was unfortunate as P7 was possible for Dany. On the positive side, the car is showing good pace, so we are happy to head to Singapore, a track where historically we’ve shown good performances. We’re confident we can take our learnings from earlier in the season and roll out with a good package to be competitive there.”

Franz Tost, Team Principal: “We started the race from P12 with Daniil and from P17 with Pierre. Both drivers had a reasonably good start and we finished the first lap in 12th and 14th position. Everything was under control in the first few laps, we started on Prime tyres to stay out as long as possible, to then switch to the Options later. Unfortunately, Pierre’s race was negatively impacted by Stroll, who forced him to go through the gravel trap to avoid a collision, losing a lot of time and possibly car performance as well. During the virtual safety car, we decided to bring both cars in to change to the Option tyre and everything worked well. When Daniil re-joined the race, he was in P6 and had great pace, so I think he could have finished in P6 or P7 if he didn’t have to retire due to an oil leak. Pierre then got stuck behind Norris and wasn’t able to overtake him, so he could only finish in 11th position. It was a very disappointing race weekend for us as we expected much more, so we have to analyse everything to come back stronger and more competitive in Singapore.”