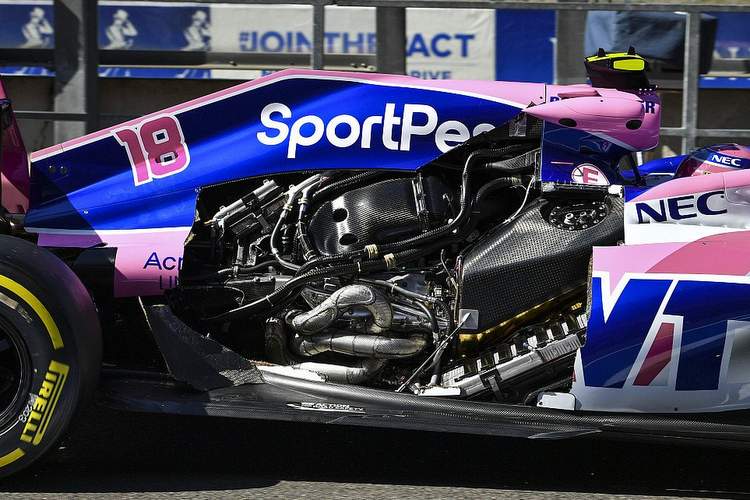 Lance Stroll loses a large section of the engine cover of his Racing Point when it blew off at the end of the Kemmel straight, scattering debris across the track during FP1 for the Belgian Grand Prix.

The bodywork that peeled away was reminiscent to those Terminator robots whose ‘skin’ disintegrated to reveal the computerised internals of each killing machine.

It was far less dramatic at Spa-Francorchamps on Friday morning, when the pink car lost a substantial section of its side engine cover speeding down the Kemmel straight, revealing a neat array of Mercedes PU bits in the bright sunshine on the day.

The young Canadian drove the car, with internals exposed, back to the pits to sort out the issue.

Stroll played down the incident in his end of the day report and said, “One of the better Fridays we have had this season so that is promising. We did some consistent running and the pace of the car is looking good, which is what we expected here in Spa.

“We suffered some heat transfer issues behind my seat so we will look into that overnight but overall I am feeling positive. It is a shame we have an engine penalty but it is what it is.”

Racing Point were buoyant heading to Spa with substantial upgrades and indeed their cars were at the sharp end of the midfield pack, but niggles such as the ‘strip-show’ and a problem with Sergio Perez’s new Spec-4 Mercedes PU late in the day hampered their progress.

On the positive side, after Friday’s free practice the team confirmed Perez will remain with the Pinks for another three years, meaning he and Stroll will be teammates until at least the end of 2022.