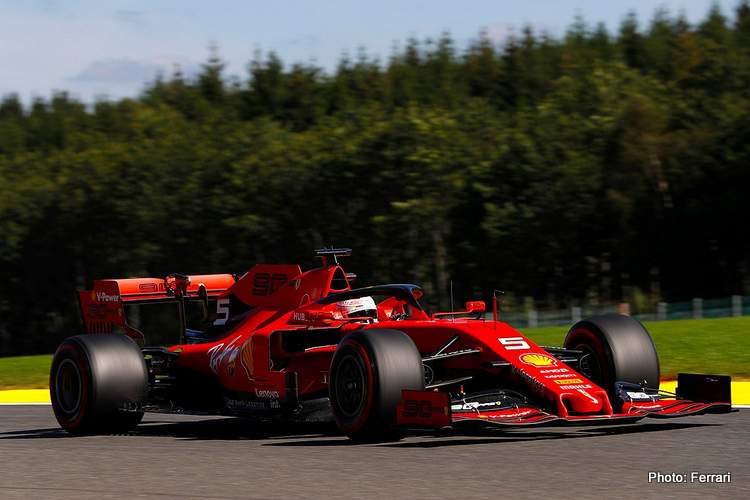 Ferrari strutted their stuff in the first free practice of the Belgian Grand Prix weekend, Round 13 of the 2019 Formula 1 World Championship, when the red pair topped the timing screens at the end of the morning session at Spa-Francorchamps.

Sebastian Vettel, who last won when he triumphed here last year, set the pace with the best lap time of 1:44.574 which was two-tenths up on his teammate Charles Leclerc.

Nine-tenths adrift of the Reds were the Blues, Max Verstappen in third and only 0.077 of a second up on his new Red Bull teammate Alex Albon who acquitted himself remarkably well during his first session in the RB15. It’s very early days but fair to say he has ticked the first box with ease.

Mercedes had a strange morning with Valtteri Bottas fifth fastest but a massive 1.3 seconds shy of the top time suggesting the that the powder remains dry in the Silver garage.

Lewis Hamilton spent a large chunk of the session off-track as the team sorted out an issue with the world champ’s W10. He hit the track late and thereafter was never at ease as he ran wide and missed brake marks as he sought the sweetspot. He was sixth, 1.4 down on Vettel.

Racing Point appear to have a good package out-the-box at a venue where their ancestors have always fared well. Lance Stroll was Best of the Rest albeit 1.6 of a second shy of the top time, with teammate Sergio Perez a couple of tenths further back in ninth.

Stroll had a scary moment when the side cover of his car blew off midway through the session.

Daniel Ricciardo, eighth fastest, split the Pinks on the timesheets. Renault teammate Nico Hulkenberg was a tenth and a bit off the Aussie’s best effort and good for 11th.

Both Mclaren’s were also there-or-thereabouts with Carlos Sainz and Lando Norris 10th and 12th respectively.

Pierre Gasly ended his first session back with Toro Rosso down in 18th, 3.4 seconds off the benchmark time, 2.3 slower than the man that took his place at Red Bull and three tenths off his teammate Daniil Kvyat in 17th.

George Russell sat out FP1 with Nicholas Latifi taking over his Williams cockpit, the team’s reserve was 19th and a tenth faster than Robert Kubica in the sister car.

In a nutshell, the plot is panning out to be a battle between Big Three on another level altogether with Ferrari looking strong but, at the same time, it would be fair to say that Red Bull and Mercedes have yet to unleash what they have.

The midfield is where the close action is happening, with less than half a second between Stroll in seventh and Norris in 12th. 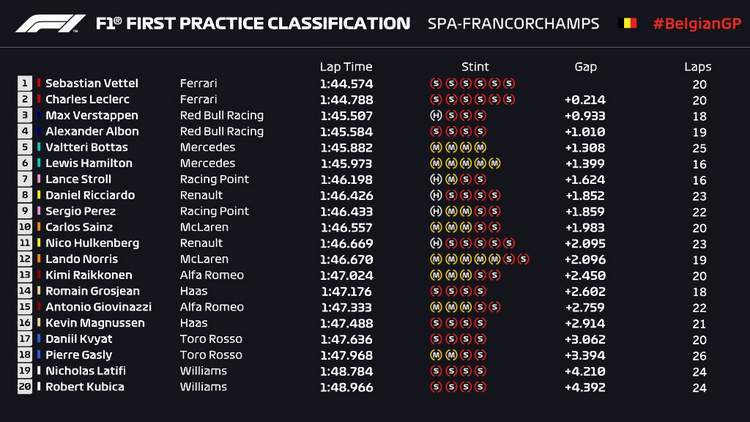