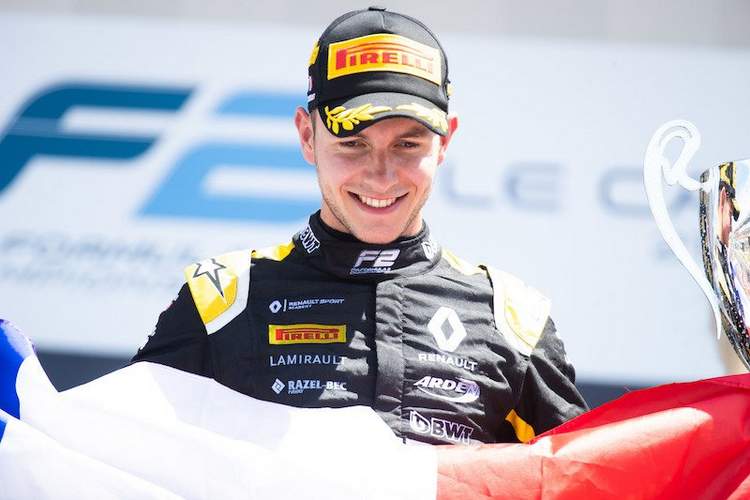 Renault F1 junior and BWT Arden driver Anthoine Hubert (22) died after sustaining injuries in a horrific accident during the Formula 2 Feature Race at Spa-Francorchamps on Saturday afternoon in Belgium.

Frenchman Hubert – the reigning GP3 Series champion – was involved in a five-car pileup on lap two of the race at Spa-Francorchamps as the mid-pack roared through Eau Rouge and Raidillon.

Hubert’s car appears to be hit by Sauber Junior Team driver Juan Manuel Correa exiting Raidillon corner. The race was stopped and then cancelled as medical tents were set up on track to treat the drivers and usher out spectators in range of the area.

The FIA confirmed that Hubert, who was airlifted to a local hospital, succumbed to his injuries at 18:35 local time, over an hour after the accident. He is the 48th driver/rider to lose his life at Spa-Francorchamps since 1925.

Correa was also hospitalised and is described as being in a stable condition. Alesi has been released from the medical centre.

Motor sport’s governing body also revealed that it is “providing support to the event organizers and the relevant authorities, and has commenced an investigation into the incident.”

The Federation Internationale de l’Automobile (FIA) regrets to advise that a serious incident involving cars #12, #19 and #20 occurred at 17:07 on 31/08/19 as a part of the FIA Formula 2 Sprint Race at Spa-Francorchamps, round 17 of the season.

The scene was immediately attended by emergency and medical crews, and all drivers were taken to the medical centre.

As a result of the incident, the FIA regrets to inform that the driver of car #19, Antoine Hubert (FRA), succumbed to his injuries, and passed away at 18:35.

The driver of car #12, Juan-Manuel Correa (USA), is in a stable condition and is being treated at the CHU Liège hospital. More information on his condition will be provided when it becomes available.

The driver of car #20 Giuliano Alesi (FRA) was checked and declared fit at the medical centre.

The FIA is providing support to the event organisers and the relevant authorities, and has commenced an investigation into the incident.

Born in Lyon on 22 September 1996, Hubert’s single-seater career began in 2013, claiming the French Formula 4 Drivers’ Championship, winning 50% of the races on the way. After that he spent two seasons in Formula Renault Eurocup with Tech-1 Racing, finishing fifth in his second year.

He graduated to the highly-competitive European Formula 3 Championship in 2016, ending the year eighth with one victory to his name at Norisring, in round five.

Anthoine took on the streets of Macau later that year with 2017 commencing his maiden season in GP3.

In 2018 he stepped up with Renault Sport Racing, going from Affiliated Driver in 2018 to Academy Driver for 2019.

He sealed the championship in the penultimate race of the season in Abu Dhabi. The win meant Anthoine added a second crown to his name having won French Formula 4 in 2013.

In 2019 he progressed into F2 with BWT Arden where, after 16 rounds, he lay eighth in the championship with two victories this year, a famous one at Monaco and one on home soil at Paul Ricard. The second-best placed rookie.

Shocking Accident Video
(NB: In all likelihood, this in defiance of FOM policies but the public have a right to know and will remain on until they release an official clip or they ban the user who posted it.)

The news of Hubert’s death prompted an outpouring of condolences on social media:

Absolutely shocked by the tragic accident of Anthoine Hubert. Terrible. My thoughts are with him and his family, friends, team and loved ones. #F2 pic.twitter.com/NzLTSfqmqT

Devastating news. God bless your soul Anthoine. My thoughts and prayers are with you and your family today 🙏🏾😔

I can not believe it. RIP my friend ❤ pic.twitter.com/vuiWBSMuPV

All of us at Pirelli feel so incredibly sad to hear the tragic news about Anthoine Hubert, which has just been made official. Our thoughts and condolences are with his family, team, and many friends. @FIA_F2 #F2 #Hubert

Haas F1 Team sends its deepest condolences to Anthoine Hubert’s family following this evening’s tragic news. Our thoughts go out to them as well as Arden, Renault and the FIA F2 community at this time.

Our thoughts are with his family.

absolutely speechless.. what a tragedy!! my thoughts are with the family and friends of Anthoine Hubert 😔

“Anthoine was a wonderful person and a tremendous racing talent who had already enjoyed great success in the sport. We extend our sincere condolences to his family, friends, and supporters.”

RIP Anthoine. How terrible. Sending thoughts and prayers to the family and friends of Anthoine 💔 #racingunited

All our thoughts are with his family and friends

He will never be forgotten pic.twitter.com/IJtA9hyJNw

It is with deep sadness that McLaren Racing learns of the passing of Anthoine Hubert in today’s Formula 2 race. The team sends its heartfelt condolences to Anthoine’s family and loved ones, his colleagues at the Arden team, and the entire F2 community. pic.twitter.com/pfhRS7fBbO

Can’t believe it, we had the same age, we started racing together and battled on track for years.
All my thoughts goes to his family. Repose en paix Anthoine pic.twitter.com/ud5U7k4UAQ