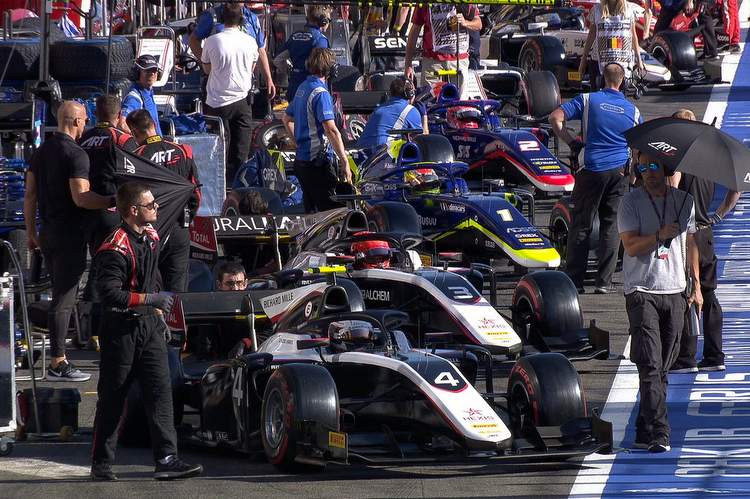 Nyck de Vries delivered on his Free Practice form with Pole position in FIA Formula 2 Qualifying, to strengthen his grip at the top of the Driver’s Championship and set himself up for a potential fourth win of the season.

The ART Grand Prix man will start ahead of DAMS’ Sérgio Sette Câmara and Campos Racing’s Jack Aitken, following an early end to the session, after a late red flag.

Sette Câmara was the first out on track in hot conditions and the first to top the timesheets, thrashing his machine around the Circuit de Spa-Francorchamps in 2:23.620. Callum Ilott was one of seven cars yet to set a time when his Sauber Junior Team by Charouz machine came to a halt on track and forced the session to a brief stop, with a red flag.

When they returned, De Vries and Nobuharu Matsushita swiftly went to work and both set purple sectors in their battle for pole position. It was the Dutchman who came out trumps, beating the Japanese driver by as little as 0.0.17s for P1.

With 15 minutes left on the clock, the grid headed in for fresh rubber and when they returned, De Vries and Matsushita continued to dominate. The in-form duo shattered their own times to remain 1st and 2nd, ahead of Guanyu Zhou and Louis Delétraz.

Four minutes of the session remained when Sean Gelael slid off the circuit and slammed into the walls, bringing out the second red flag of Qualifying. Sette Câmara and Aitken were fortunate to cross the line in time to clock their laps, and their tours of the circuit were good enough for P2 and P3, which put them ahead of Matsushita.

With De Vries’ main title rival, Nicholas Latifi, languishing back in 11th, the Dutchman will sense a massive opportunity in the fight for the Championship when action resumes tomorrow, at 4.45pm local time.

Having examined video evidence and summed and heard the driver and the team representative, the stewards determined that neither King, nor Raghunathan, slowed down sufficiently under yellow flag conditions.

Meanwhile, Callum Ilott has been given permission to start the Feature Race from the back of the grid, having failed to set a time during today’s Qualification, due to a mechanical failure.

The top three qualifiers for tomorrow’s FIA Formula 2 Feature Race here in Belgium. We are joined by pole sitter Nyck de Vries for ART Grand Prix, in second place is Sérgio Sette Câmara for DAMS and in third is Jack Aitken for Campos Racing. Nyck, your fourth pole position of the season, and you were also on pole here last year, you must like it around this place!
Nyck de Vries: Yeah it’s a kind of home race for me. Obviously it’s a very unique and special track and I certainly very enjoy going around this place. It’s been a very good day for us after the summer break and hopefully we can have another good day tomorrow and turn it into a win.

FIA Formula 2: You managed to do exactly that here 12 months ago and turn pole position into a victory, and I think with the fastest lap too if I recall correctly. What’s going to be the key to doing something similar tomorrow? What are the main challenges of this race?
Nyck: At the moment I don’t have a clear answer to that. We’ll find tonight and tomorrow during our preparations ahead of the race. I think macro is quite high here and temperatures will be quite hot so naturally we will probably have to manage tyres and have to deal with tyre degradation, but I think we’ve been quite competitive today so I just really hope that we can turn it into a win tomorrow.

FIA Formula 2: Well done today. Sérgio moving on to you, it’s your second front row start of 2019, are you happy with that result?
Sérgio Sette Câmara: Yeah I’m quite pleased. Spa is a track that I’ve had good experiences, good results, throughout my years here but this weekend I didn’t seem particularly competitive. I was not so happy with the car balance and, like always in F2, it’s difficult to change things in the short sessions that we have. I think we did a good job in the first set. Nyck and I were two of the first cars out of the pit lane, so I can speak for ourselves but I’m not so sure about the other cars. We did pretty much a full push, or at least a half push, in the first set before the red flag so that compromised our first set of tyres. Somehow Nyck still managed to set the fastest time by then. He seems to have a really good pace but I didn’t so it meant that I had all the pressure with the last set of tyres. I had to deliver. It’s just one push around here so it was not easy, but we took the right choices with the car set-up. The team did an amazing job so I’m happy.

FIA Formula 2: Now coming back after the summer break you start to look through which races are coming up towards the end of the season. The gap to Nyck is 59 points, so is it crucial that you beat him tomorrow?
Sérgio: It’s always important to score the most amount of points that you can because you never know. There could be a weekend where you have a problem or someone crashes into you, or you even make a mistake, and then you don’t have the points. You have to average it out. I think more like that. Nyck does his championship and I do mine. I try to score the most points that I can and that’s how I try to think. This round marks the start of the last third of the championship I guess, so we’ve got to start looking at points now and championship positions. Jack and [Luca] Ghiotto are particularly close in fourth and fifth, it’s a bit of looking behind [laughs] but trying to score as many points as I can is where my focus is at.

FIA Formula 2: Thank you very much. Jack, moving on to you. It’s your second top three qualifying performance of the season, and it matches your best qualifying result. How was that session from your point of view?
Jack Aitken: It was quite tricky with the red flags. It interrupted the flow a little bit. Luckily I managed to sneak one in at the end, but we were struggled a little bit in practice earlier so I’m quite happy to have made up a bit of ground. It was not a bad lap I thought! [Laughs]

FIA Formula 2: When you pull out a lap like that and get yourself in the top three, but as you say, practice maybe was not as smooth as it could have been, what are your hopes going into the race? Is there a bit more trepidation?
Jack: No, I think we’re pretty confident in our race pace at the moment. We’ve had some good races in the last few rounds, and like Nyck mentioned it’s probably going to be quite high degradation – or at least there will be some deg I think. We’re usually pretty racy in those situations so I’m looking forward to it.

FIA Formula 2: Well done today. Nyck, just returning to you, a similar question to the one that Sérgio got as we do look towards the final part of this season. Is the championship any bigger in your mind after the summer break?
Nyck: No. It’s honestly not even though people might think it is. I’m not lying here. We’re here to win and it’s been a little while. I think Le Castellet was our last win. I was pretty disappointed that in Budapest we didn’t manage to turn our pole into a win. At the end of the day we approach every weekend the same way and we try to maximise the points all the time. I’m happy that we managed to put it on pole today. Thanks to the team for giving me a super good package. Hopefully we can win the race tomorrow and we’ll take it day by day.