Ocon to replace Hulkenberg at Renault for 2020 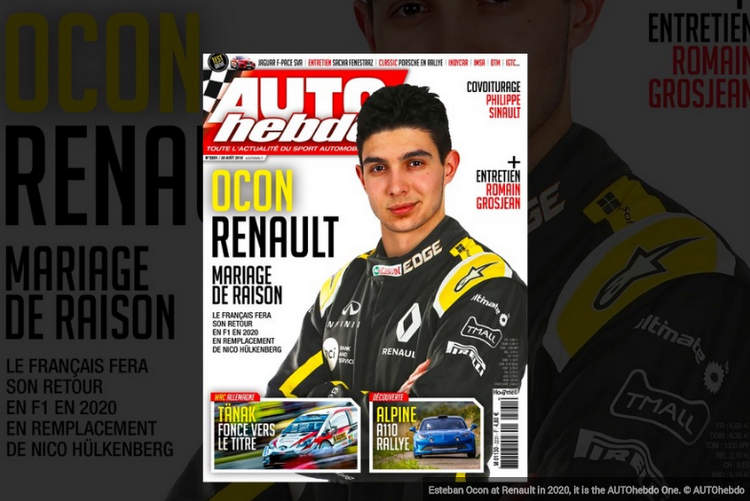 Auto Hebdo are running the above cover story for their latest magazine edition with Esteban Ocon dressed in a Renault race suit with the title: Marriage of Reason – confirming the Frenchman’s return to the Formula 1 grid in 2020.

The report, in France’s leading motoring magazine, confirmed that the deal was done for the Mercedes reserve driver to suit up for the French team next year alongside Daniel Ricciardo, leaving Nico Hulkenberg without a seat.

The cover headline confirms: “The Frenchman makes a return to F1 in 2020 in place of Nico Hulkenberg.”

Something that eluded them last year when a similar scenario played out but that time they were usurped by the Daniel Ricciardo scoop by the French team.

The report adds: “There will be no announcement until the Mercedes officially confirms their drivers for next season [Hamilton and Bottas] and as long as Nico Hulkenberg’s future hangs in the Balance, but we can already take for granted the arrival of Esteban Ocon at Renault in 2020 on a two-year deal.”

When approached for comment Renault only confirmed an interest in Ocon, but did not reveal if the French team would have a French driver for the first time since 2009.

The Ocon factor was key to the Silly Season puzzle. This now also confirms that Mercedes have opted to retain the successful partnership between Valtteri Bottas and Lewis Hamilton.

An announcement confirming the extension to Bottas’ contract is expected ahead of this weekend’s Belgian Grand Prix, while the revelations by Auto Hebdo – sourced from deep within Boulogne-Billancourt hallways – will no doubt trigger sound bites from relevant figures before they are hounded by the media mob at Spa-Francorchamps this weekend.

With the Ocon question settled, Hulkenberg is the obvious loser in the deal. His best option of a decent ride next year would be with Haas where Romain Grosjean is on shaky ground as is Kevin Magnussen, albeit to a lesser extent.

Williams might have a berth too should the German become desperate to stay in F1, after all it was the team that handed him his debut at the 2010 Bahrain Grand Prix.

Ocon, on the other hand, resumes his career where he left off with 50 Grand Prix starts. He will be looking to add to his tally of 136 points he has on his CV since he made his first F1 start at the 2016 Belgian Grand Prix.