FIA: Teams will have 2021 Formula 1 rules in October 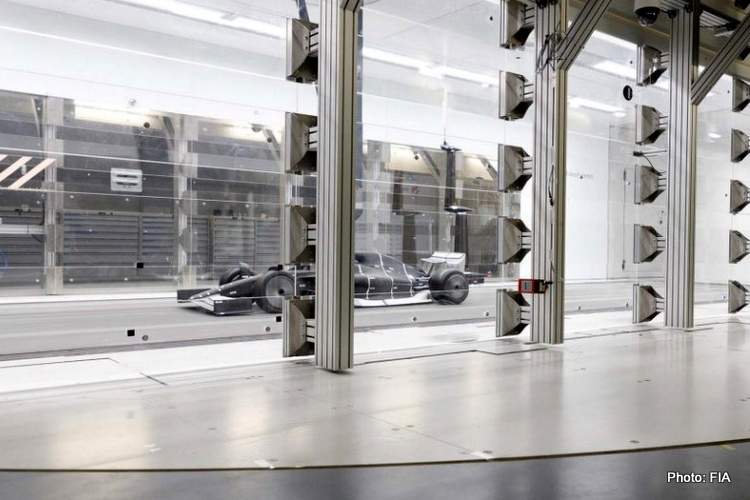 The FIA report that by teams will have a full set of technical and sporting regulations when Formula 1’s governing body publishes them in October.

This was revealed in a lengthy update on the state of play regarding the 2021 rules by FIA Head of Single Seater Technical Matters Nikolas Tombazis, Formula 1 Chief Technical Officer Pat Symonds.

wind tunnel testing of car models for 2021 has proved encouraging so far, with the results suggesting the next generation of F1 cars should be able to follow each other more closely. Now attention is turning to refining the rules – and more specifically breaking the rules…

A large part of the focus of the FIA and Formula 1 up to now has been on trying to reduce the effects the wake generated by a leading car has on a chasing car’s ability to follow, in order to provide closer racing and improved overtaking opportunities.

This, of course, runs counter to the aims of a Formula 1 team, where there only desire is to beat their rivals. And if part of the victory is obtained by disrupting the stability of a competitor then that’s a target to be chased.

“We are trying to see where the rules we have written are robust and where they might be a little weaker,” says Symonds. “I’m sure ultimately the wake characteristics of a fully developed 2021 car are not going to be quite as good as we have got running at the moment, but I think they will still be very good, and it will be massively better than a 2019 or a 2020 car. I’m absolutely certain of that.

“We’re trying to look for the loopholes, look for the unintended consequences. That’s actually a difficult thing to do when you have written the rules. That was my experience when we were working on the 2009 cars. Because I had been involved in writing the rules, I found it difficult to think of the loopholes as I knew what was intended. That was a lesson learned, we have taken it on-board.

“We’re trying to forget what the intention was and looking at what we have actually written down and see if we can put our team hats on.”

Tombazis adds: “We are trying to find things that make the car go faster. If a team makes their car faster but the wake doesn’t get any worse, we don’t have any problem with that. But if a team makes the car faster and also hurts the wake, then clearly they will do it if the rule permits it. We can’t ask them to be benevolent. But we want to know about it so we can see if there are any fundamental weaknesses in the rules, any loopholes.

The process also aims to identify areas where the FIA and Formula 1 see scope for performance gain by teams, ‘playgrounds’ where innovative thinking by teams can provide a competitive advantage without impacting on the goals set by the governing body and F1’s promoter for improved racing.

“We want to safeguard the wake performance but we don’t want all cars to look the same or to be exactly the same,” says Tombazis. “There are some areas of the car where performance can be found and not worsen the key parameters of the following car and we want to encourage those areas to be a bit freer.”

While the current iteration, as seen in the wind tunnel video, is very close to what we can expect the 2021 cars to look like, there will still be changes, particularly concerning the front wing.

“There’s a lot of work going on the front wing at the moment to improve some of its characteristics and also to make it look a bit less square,” says Tombazis.

As part of their attempts to break the rules, there will be two further wind tunnel sessions. The first will take place in October with a further test planned for December following the publication of the regulations, a timeline Tombazis says provides for adjustments to be made in line with the governance of the sport.

“As with any set of regulations it is a constantly evolving process,” says Tombazis. “In October we will publish a full set of technical and sporting regulations which will come into force in 2021, and will not fundamentally be changed. If we do find an area where we feel some updates are necessary to maintain our goals for better raceability, then this is something that we will be able to do working with the teams within certain time constraints.”

Finally, Symonds adds that beyond the tests aimed at the drafting of the 2021 regulations work will continue in order to monitor exploitation of the rule set.

“It’s not our intention to just stop at that point [December]. We will continue to investigate, continue to develop, continue to try and exploit the regulations, in the same way the teams will and from time to time next year, we’ll go back in the wind tunnel to check out results.”