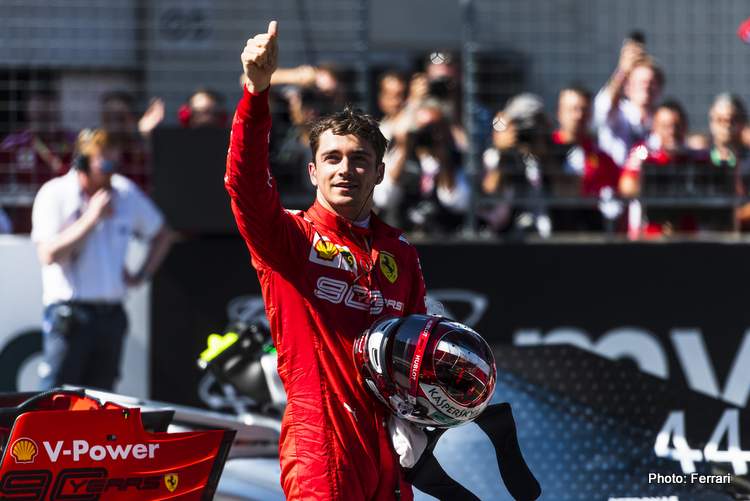 Scuderia Ferrari took its 222nd pole position courtesy of Charles Leclerc, who will start at the very front of the field in the 32nd Austrian Formula 1 Grand Prix.

It was the third pole of the season, following on from the ones in Bahrain – Charles again – and Sebastian Vettel’s in Canada. This fantastic day for the Monegasque driver came in stark contrast to that of his team-mate.

Vettel was unable to take part in Q3, even though he had made the cut. A technical problem on the SF90 means he will now start from ninth on the grid.

Sebastian. As the 15 minutes of Q2 came to an end, the team noticed a problem with the engine’s pneumatic air supply line and it was not possible to fix it in time for the final part of qualifying. Sebastian, officially tenth therefore, will actually start from ninth, as Kevin Magnussen has a grid penalty.

Q3. Therefore for the final 12 minutes of the afternoon, Charles was the sole Ferrari representative on track. He first did a 1’03”208, before getting down to 1’03”003, which is a new track record. This is Scuderia Ferrari’s eighth pole in Austria, 16 years on from the previous one, set by Michael Schumacher in 2003. The Grand Prix starts at 15h10 CET tomorrow.

Charles Leclerc: “I am happy with qualifying today. It is satisfying to see that the work we did in preparation, especially in terms of the way we set up the car for Q3, has paid off so quickly. A great result for me, unfortunately not for the whole team with Seb having a problem in Q3.

“Hopefully, we will have a good race tomorrow. I am happy about our tyre choice with the soft compound. It will be the key to have a good start and keep competitors behind, especially at the beginning of the lap. Our race pace was quite strong this weekend so I am confident that we can do a good job.”

Sebastian Vettel: “It’s obviously bitterly disappointing on a day like this, when you have the car to fight for pole and you are not even taking part. There was a problem with the car so we lost a part of Q2 and all of Q3.

“We fairly quickly made a decision but we had to take the bodywork off and it was not easy to get to the faulty bit. The guys did everything they could but we could not fix it in time.
I knew that if we’d fixed it, most likely I would have had only one run, so I was trying to focus only on that but it didn’t happen.

“As much as this is a pain, it’s good to see that Charles came through and got pole. I am happy for the team, obviously nor happy for my side. I think our car is quick this weekend, quicker than the people in front of us so I am looking forward to a good day and a good race tomorrow.”

Mattia Binotto Team Principal: “We are very pleased with Charles’ performance, which continues to get better all the time. All in all, a Ferrari has been on pole twice in the last three races and this is a glass half full scenario which I’m pleased to see. Today’s result is down to the way Charles has evolved and to the work of everyone in the team.

“Of course, we are disappointed for Sebastian who could have had a great qualifying, but because of a trivial mechanical problem he could not leave the garage. Probably, because of riding over a kerb, a mechanical connection came apart resulting in a loss of pneumatic pressure to the engine. The mechanics tried their best to fix the problem but unfortunately, the connector is very inaccessible. However, we have no concerns about this for the race.

“When Seb realised his session was over, he thanked his crew and spoke a few words of encouragement to Charles, who in turn, after taking pole had a few words of consolation for his team-mate. As for the decision to start the race on Soft tyres, we believe it’s the right one. Yesterday, we found they were very consistent and we are convinced that will also be the case tomorrow and could give us a performance advantage.”