Mercedes: We are relentless and will continue to push 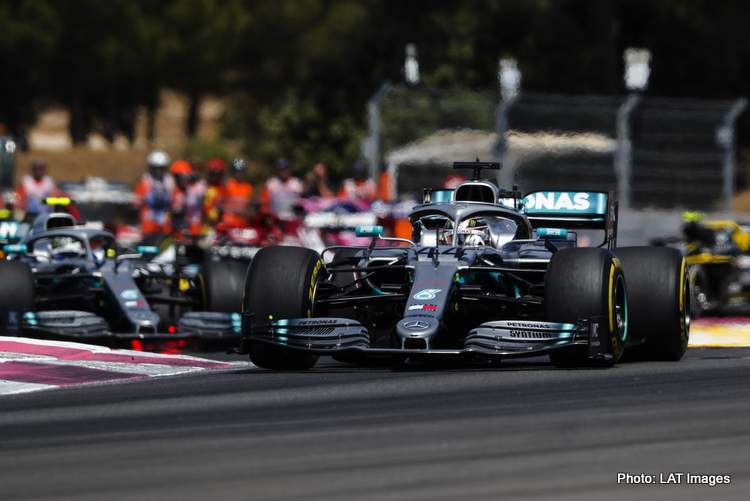 Mercedes report from the French Grand Prix, Round 8 of the 2019 Formula 1 World Championship, at the Circuit Paul Ricard in Le Castellet.

Lewis Hamilton: “I’ve been racing a long, long time but this just never gets old. It’s always a challenge out there and I just love trying to find the edge, and really being on top of this machine. This is actually an awesome track to drive in the race, there’s some really technical areas.

“It may look easy from the outside but it wasn’t easy at all, everything’s always on the edge. So, when I could, I was saving tyres, saving the engine, saving fuel. I had quite big blisters on my front tyres which I was a little worried about.

“But we got to the end and I couldn’t do it without this incredible team. I’m so proud of everyone and so proud to be part of this group of people. This has been the best start of the year so we have got to enjoy it.”

Valtteri Bottas: “It was a fairly quiet race in the end. The start was my best bet, but Lewis also had a good start, so the opportunity wasn’t there. Lewis was very quick today; I was trying to keep up, but my front tyres were starting to fall into pieces, both on the Mediums and at the end on the Hard tyres towards the end as well.

“We were concerned with the blistering we saw in the last part of the race, so I had to back off a little bit. There was definitely a bit of margin left, but we wanted to be on the safe side and make it to the end.

“But ultimately, Lewis had the pace advantage today and kept the tyres in better shape, so it’s something for me to have a look at and learn. I’m really proud of the work we’ve done as a team, scoring another 1-2 is a great result.

Toto Wolff: “In terms of car and driver performance today, that was one of our best of the season. Lewis drove a really good race, he was in complete control at the front and it was a truly faultless performance by him. Valtteri struggled a little in the second stint and he lost a chunk of time under the VSC towards the end, so Charles could get very close in the end.

“I am really pleased for the team this weekend, it’s been a tough few weeks with a lot of long days, but we are relentless and will continue to push. To score another 1-2 finish is an incredible result and a credit to all the hard work and effort of this team.

“Now, we look to Austria, which is coming home for me. It’s a power track there and we have been a bit marginal on cooling. It’s meant to be very warm there, so we expect this to be a much harder fight.

Andrew Shovlin: “It’s been another very good weekend for the team and well done to Lewis on a very strong performance. We looked to have the better car here today but not by a big margin so both drivers were having to work very hard to build any kind of gap. The track was very hot and it made life quite difficult for the tyres.’

“We were pushing hard in the first stint to try and build a gap to protect against the undercut. That more or less went to plan and by the stops we had managed to get both cars to the position where they were not really under any threat. We’d not run the hard tyre so far this weekend but we seemed to have a good balance on it and once it was up to temperature, it was working nicely.

“We had a bit of blistering on the front tyres of both cars but it was in an area that doesn’t have to work hard in the corners so it didn’t affect the grip. The least comfortable bit of the race was the last couple of laps with Valtteri when Charles managed to get right onto his gearbox.

“Valtteri was not close enough to the delta time on the restart and this is what allowed Charles to get close but we need to speak to him to understand what went wrong, we’d told him it would not be a long VSC but maybe we’d not communicated well enough just how brief it was going to be.

“We also dropped a point with Lewis, we’d not tried hard enough to go for the fastest lap thinking that Sebastian would easily have it, but we should have taken it more seriously. So, bits here and there to improve but well done to the whole team on a great result!”