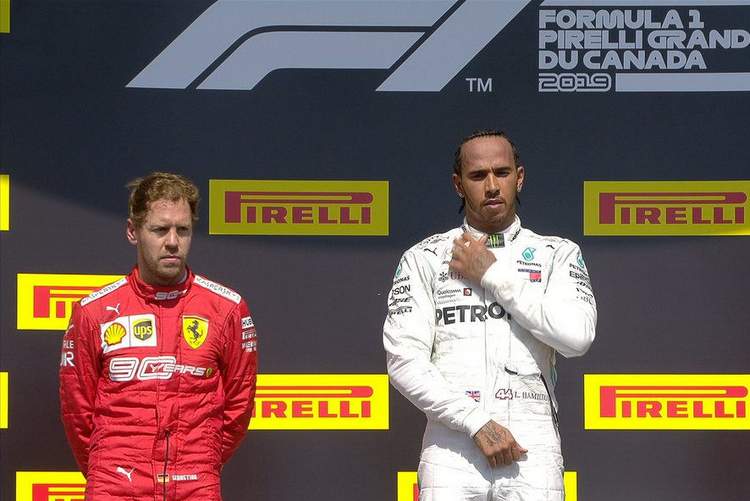 If Formula 1 shot itself in the foot on Sunday in Canada, as some have reported after the race, then a cynic might suggest it was remarkable there was anything left to hit.

The billion-dollar sport has faced many similar moments of self-induced harm over the years, sometimes with good reason, but controversy has also been the life-blood that keeps it in the conversation.

Sunday’s race in Montreal may come to occupy a similar place in history, not least for Sebastian Vettel’s rage and emotional post-race response to being denied a memorable victory by a stewards’ decision.

Talk of a ‘stolen’ win, at a circuit named after Ferrari great Gilles Villeneuve and in a part of the world that Formula One’s owners Liberty Media see as a key to commercial growth, may come across as something of an own-goal.

“I felt a kick in the stomach when I saw that (five-second penalty) flash up on the computer,” said Sky television commentator and former racer Martin Brundle.

“Any of the stewards ever raced at the front in F1? Mental penalty,” commented retired Australian racer Mark Webber, a former teammate and foe of Vettel’s, on Twitter.

Vettel made a mistake while leading on lap 48, tracked across the grass and rejoined in a move that forced Lewis Hamilton to brake as the Mercedes driver attempted to squeeze past.

Once the stewards had penalised Vettel, the thrilling duel of champions fizzled out. The debate, about real racing and whether over-zealous officials are turning the sport soft, will run and run.

“I think the function of the stewards is to penalise flagrantly unsafe moves not honest mistakes as result of hard racing,” said 1978 world champion Mario Andretti on Twitter. “What happened at #CanadaGP is not acceptable at this level of our great sport.”

Article 38.1 of the sporting regulations allows the race director to report any on‐track incident or suspected breach to the stewards for them to decide whether or not to proceed with an investigation.

The five stewards have the discretion to decide whether to penalise a driver but are expected to be consistent — not always easy when they change from race to race.

Brundle recognised that Sunday’s stewards, one of whom was five times Le Mans winner Emanuele Pirro, had to make hard decisions.

“You can’t just go ‘it’s a really good fight so let’s just ignore the rules for a moment’,” he said in their defence. “And that’s why you have stewards. But for me that was absolutely the wrong decision.”

Others felt the nature of the circuit should have been taken into account.

“No space for Lewis is name of game with street tracks. What happened to ‘Let them race?’ Was it sketchy? Yes! A penalty? Not in my view,” commented Alex Wurz, chairman of the Grand Prix Drivers’ Association, on Twitter.

The ranks of former drivers were not united, however.

“It is very, very clear that unfortunately it was an unsafe return to the track. That is the rule. You have to return safely and that is the way it is. A penalty is deserved in that case,” said 2016 F1 champion Nico Rosberg who is always reluctant to criticise his former teammate Hamilton.

The situation on Sunday was made more intense by the expectation that Mercedes’ streak of six successive wins might be about to end, breathing some life into a season short of suspense and real rivalry.

Mercedes boss Toto Wolff said rules were rules and the stewards had to be respected but changes might be made in future.

“If we want to change the regulations and have harder racing, I’m the first one up for it,” said the Austrian. “It becomes a little bit more dangerous and more exciting, but count me in.”