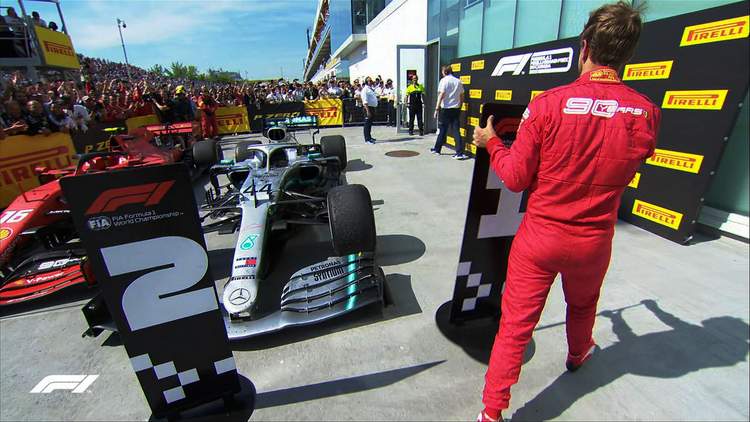 Mercedes driver Lewis Hamilton inherited victory after Sebastian Vettel was handed a five-second penalty during a tense 2019 Canadian Grand Prix weekend, Round 7 of the 2019 Formula 1 World Championship, at Circuit Gilles Villeneuve on the Île Notre-Dame in Montreal. 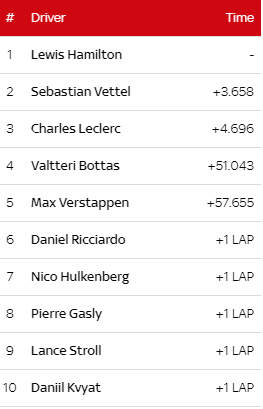 It was a controversial call which will trigger huge debate long after the race is run, it seemed like a racing incident and the Ferrari had no place to go. It was a tough call, if not an unfair one. And it ruined an intriguing contest race from that point on.

Earlier Vettel, Lewis and Charles Leclerc all had good starts with the #5 Ferrari in the lead from top spot on the grid, with the Mercedes tucked behind him and the other Ferrari in tandem.

That’s how it stayed with Hamilton keeping Vettel within a couple of seconds, the pair really driving hard. The reigning World Champion putting the hammer down when the leader pitted.

Meanwhile, Vettel hammered his own hot laps and when Hamilton emerged from his first stop he was over four seconds shy of the red car and proceeded to attack relentlessly as the race crossed the halfway mark. The pair had left Leclerc behind in their dust. This was their duel.

By lap 40 Hamilton was within DRS as he stalked the man in front. At one point Vettel was forced to go off track over the grass in Turn 3 and Turn 4 and nearly bumping ino the Mercedes trying to squeeze past.

Vettel recovered well from a hairy moment and by lap 55 had a 1.5 seconds lead as Hamilton appeared to retreat to keep his powder dry, and shortly after the stewards had the final say.

First over the line, Vettel deserved the win, he had all the answers, but in the end was relegated to second with Hamilton promoted to winner and Leclerc third third.

It was a hollow victory for Hamilton who went on the radio as he crossed the line, “That is not away the way I definitely wanted to win, but I would have got past.”

Vettel was incensed, miss parked his car outside of parc ferme, alighted the car and paced angrily to the stewards, helmet on and body language of a Viking on steroids, understandably.

On the radio, he had earlier told his team, “No, no, no. Not like that. This is the wrong world I tell you. This is not fair, I tell you.”

He re-joins the track, and Lewis goes for the gap, but it quickly closes 😱#CanadianGP 🇨🇦 #F1 pic.twitter.com/FvZodPqt6K

Later to great cheers the German swapped the number one plaque in parc freme from the front of Hamilton’s Mercedes and replaced it with the second place board, and moved the number one to the open space where his Ferrari should have been.

Later on the podium, it got ugly when the crowd booed, but Vettel was dignified in his defence of Hamilton as the Briton took offence at the hostility.

“The people shouldn’t boo at Lewis, if anything they should boo at this funny decisions,” said Vettel in defence of his arrival who benefitted from the FIA steward’s decision.

For the Briton, a darling of Montreal to be booed in this manner is a big deal and speaks volumes for the fans’ disdain for what had transpired and marred what was a tremendous race.

When the dust settled the facts are that Hamilton got maximum points from a race that was not his to win, while Vettel dropped a further back in the title race. The score is now 162 to 100 with seven races run.

Behind the big story, Valtteri Bottas had an insignificant race but did overcome a feisty Daniel Ricciardo to finish fourth. The Finn’s race compromised from the moment he failed to deliver in Q3 a day earlier. Hamilton had him well covered this weekend.

Max Verstappen was somewhat anonymous but he again delivered with a package that was sorely down on power, yanking what he had to finish fifth after starting tenth and ahead of the Renault duo of Daniel Ricciardo and Nico Hulkenberg in sixth and seventh respectively. A good weekend for Renault.

Pierre Gasly had a strong Saturday but despite a good start and early part of the race he faded late on the finish eighth. What promised much ended in disappointed again as he was again outshone by his teammate.

Lance Stroll finally delivered a result that turned his normal dour demanour into a big smile as the young Canadian showed again that in races of high attrition he can deliver. He was a popular ninth. Teammate Sergio Perez was 12th.

The final point for 10th went to Daniil Kvyat in the Toro Rosso, the Russian delivering another solid performance at a venue where Honda’s horsepower was clearly insufficient.

Notably, every time the leaders lapped the Williams it was blatantly obvious how compromised their drivers, rookie George Russell and Robert Kubica, are which begs the question: is their lack of speed – over 4.3 seconds off the pace – a danger to others on high-speed tracks?

When the lights went out for the start, polesitter Vettel made a good start and quickly began to build a lead over Hamilton and Leclerc, with fourth-placed Ricciardo keeping Gasly at bay.

Gasly was the first of the top five to make a pit stop, with the Frenchman taking on hard tyres on lap seven. He emerged behind Stroll, however, and the slower pace of the Canadian driver allowed Renault to eventually pit both its drivers and get them out ahead of the Red Bull.

Verstappen had started the race from P11 on hard tyres and as the field pitted around him the Dutch driver rose up the order top fifth place.

By lap 20, Vettel held a 2.4 seconds lead over Hamilton, with Leclerc three seconds further back. Bottas was now in fourth place but being pursued by Verstappen.

Leclerc was then next in, and he emerged behind Verstappen. Still on starting hard tyres, the Red Bull driver offered little resistance when Leclerc made a move and by half distance, the order again showed Vettel ahead of Hamilton with Leclerc bow third ahead of Verstappen.

Hamilton now began to chase down Vettel and by lap 45 the gap between the front pair was just under a second.

Vettel was now coming under serious pressure from the championship leader and on lap 48 the German driver made a mistake on the entry of Turn 3 and went off track. He managed to keep his lead but in rejoining he squeezed Hamilton towards the wall on the exit of Turn 4.

The incident was placed under investigation and race officials handed Vettel a five-second time penalty for “unsafe re-entry”. Hamilton was told the news and was told that to take the win all he needed to do was sit on the Ferrari’s gearbox.

Further back, The Verstappen has finally made his pit stop on lap 48. He took on medium tyres and rejoined in P7. He quickly moved past the Renault’s of Hulkenberg and Ricciardo to claim P5.

Ahead, Vettel took the flag ahead of Hamilton but Hamilton was immediately promoted to the top step of the podium ahead of the Ferrari driver.

Leclerc took third place ahead of Bottas, while Verstappen took fifth place ahead of the Renaults of Ricciardo and Hulkenberg. Gasly took his fifth points finish of the campaign with eighth place and the final points positions were taken by Stroll and Kvyat. 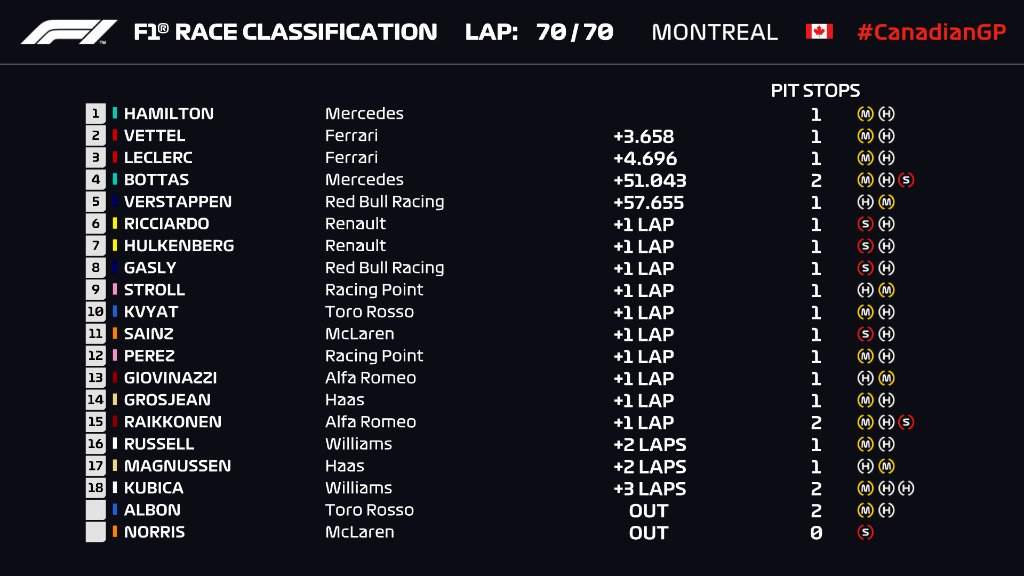 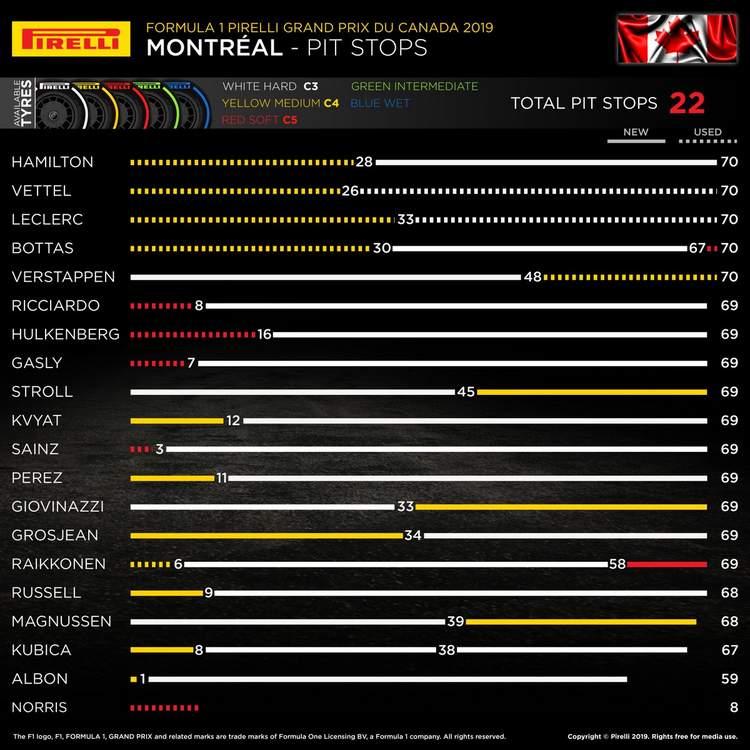 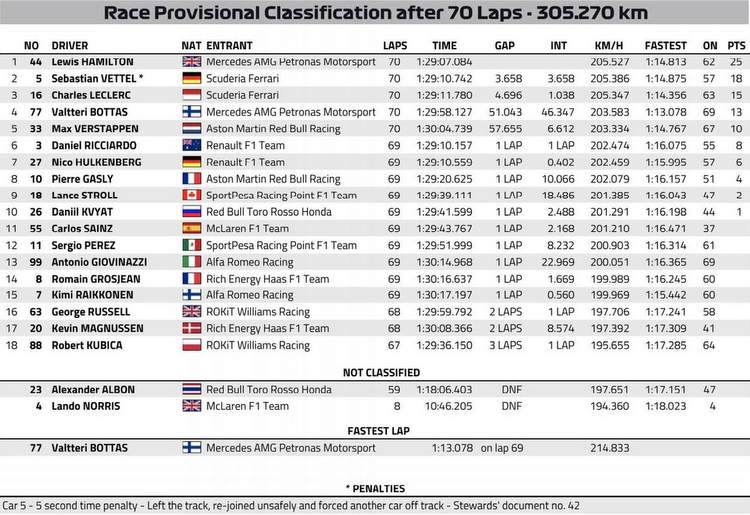