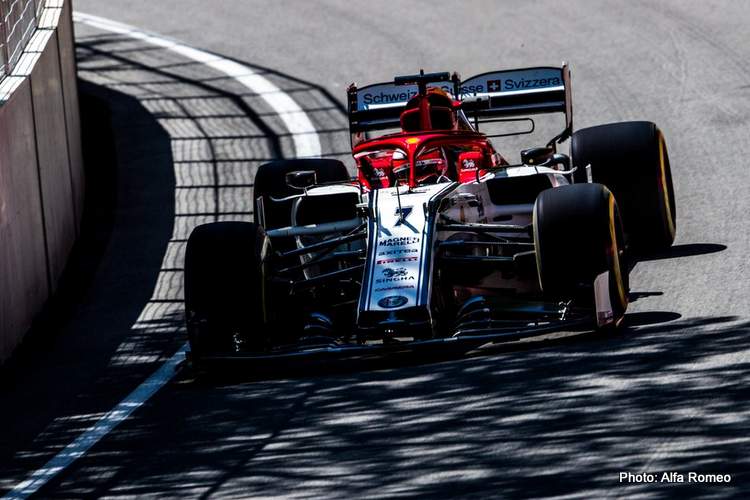 Alfa Romeo report from day one of the Canadian Grand Prix weekend, Round 7 of the 2019 Formula 1 World Championship, at Circuit Gilles Villeneuve on the Île Notre-Dame in Montreal.

P16 and P18 for Kimi and Antonio in FP2 is not a result to write home about and there is no consolation in the fact that our hero of that 2008 [Canadian Grand Prix winning] day, Robert Kubica, is even farther back than us in 20th.

Therefore, rather than dwell on the sorrows of today, we let the memories take us for a spin, fluttering in the wind like the dozens of Swiss flags that coloured that day. Swiss, not German. Now, as the most observant of you will have noticed, BMW hails from Munich.

On that day, as protocol dictates, the German anthem was played together with the Polish one to commemorate the win. But, much to the annoyance of the Teutonic carmaker, it was a sea of Swiss flags, brought with great foresight by our mechanics, that made the most lasting impression of the day.

Swiss flags on the pit wall. Swiss flags below the podium. Swiss flags everywhere. BMW hadn’t prepared any flag for the celebration (what does it say about their faith in our performance?).

Perception shapes reality, they say. On that day, as all those flags testify, it was a plucky team from Switzerland who claimed a famous win.

“Q: Kimi, talk us through the day.
Kimi: A practice day.

Q: What was the grip out there?
Kimi: Not very good.

Q: The new power unit from Ferrari – what difference does it make?
Kimi: We’ll see.

Q: You had to do the job as Antonio had an issue…
Kimi: We started okay, it’s still not the best feeling with the car, but we tried a few different things for the second practice. We still have a lot of work to do and if we can go a few tenths quicker then we can move up some positions as it is very tight in the midfield.

Q: What about the tyres?
Kimi: Friday is Friday. Saturday is Saturday.

“It was a tough day for us, in which we haven’t completed a lot of laps. During FP1, I got a bit too much of the inside kerb on turn eight and that pushed me a bit too wide on turn nine. I lost the car on exit and there was the smallest touch with the wall, but enough to cause damage. FP2 was pretty much lost, as we only went out to check the car, so we lost a lot of track time today. We have a lot of work ahead of us tonight.”