Vettel: If you find the Grip Guy give him my number 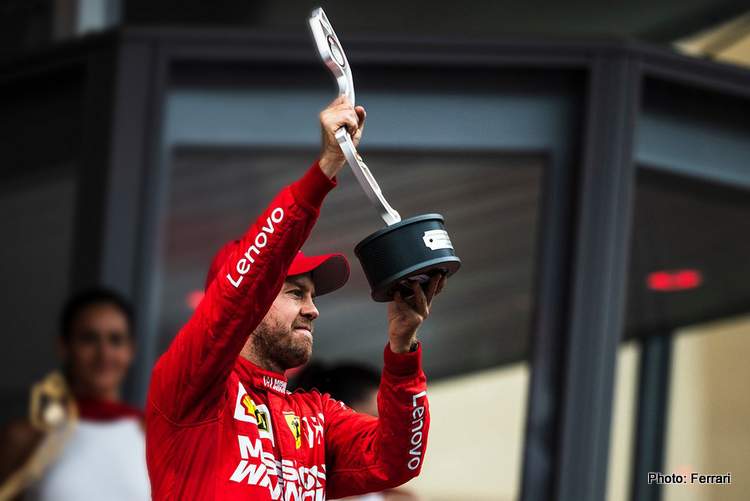 Half a dozen races into the season and the consensus among the ‘wise folks’ in the paddock is that Ferrari have the better engine package but their aero is suspect while, of course, Mercedes have a strong engine package with the W10 strong on the slow stuff, the medium stuff and the fast stuff.

Ferrari driver Sebastian Vettel was left lamenting the lack of grip in a tense and tough Monaco Grand Prix where he and his team flattered with second place but, in truth, it was inherited.

During the race, Valtteri Bottas and Max Verstappen touched while leaving the pits which forced the Finn to make an extra pitstop to sort out a puncture while the Dutchman was slapped with a five seconds penalty for the mistake made by his crew.

Hence Vettel was gifted second and he knows it.

Speaking after the race in Monte Carlo, the German told reporters, “It was not the luckiest race for us as a team, but I think the lesson from here is that we are not yet where we want to be, the pace isn’t there. I think today we sort of tumbled into second place.”

“So we did everything we could but certainly we didn’t have the pace to put the pressure on and go for a bit more. It’s just because overall we are lacking downforce, a weakness that we know.”

“I don’t think the car is as bad as it looks. The results should be better here and there but it’s very difficult for us to get the car in the window where it is happy. Certainly, when we get it in there we’re more competitive but still a way from where we want to be. That’s really the key lesson: we need to focus on trying to get the car short-term more in that window.”

“I’ve had some difficult moments this year where I’m fighting the car, I’m not really entering yet to the level where I feel a lot more comfortable and I feel comfortable to squeeze out more performance from the car but I think it’s linked to the fact that we struggle to put our car in the right window.”

“Once it is there, it is feeling better and you’re able to build-up on that but it doesn’t happen very often but it’s a combination of things. I think first we are lacking overall performance and that overall performance would help us probably to put the tyres more often in the window they would like to be in.”

“I think it’s not a secret, by now, after six races that these tyres this year seem a bit more critical to get exactly into that window…”

While ending the incredible Mercedes one-two streak is a huge feat, the reality is that Ferrari are lagging behind Mercedes and possibly even Red Bull and their ever-improving Honda package.

Looking ahead to the next rounds, starting with Canada in a couple of weeks, Vettel said, “Looking forward for the next three, four, five races, obviously make sure we improve the car, put more grip onto the car so that we can go faster, simple as that.”

“But that guy seems to hide fairly well. I don’t know exactly where he is right now, so if you find him, or if you’ve got his number, that grip guy, but we’ve been looking for him for a while. I don’t think there are any secrets we will be able to unveil.”

“We need to work hard and pay a lot of attention to small things, to details in order to get closer and once we are matched I think we can put a lot more pressure on them. I will have a lot closer races but currently, we are sitting too far away behind Mercedes and probably a match on average with Red Bull is not where we want to be,” added Vettel.