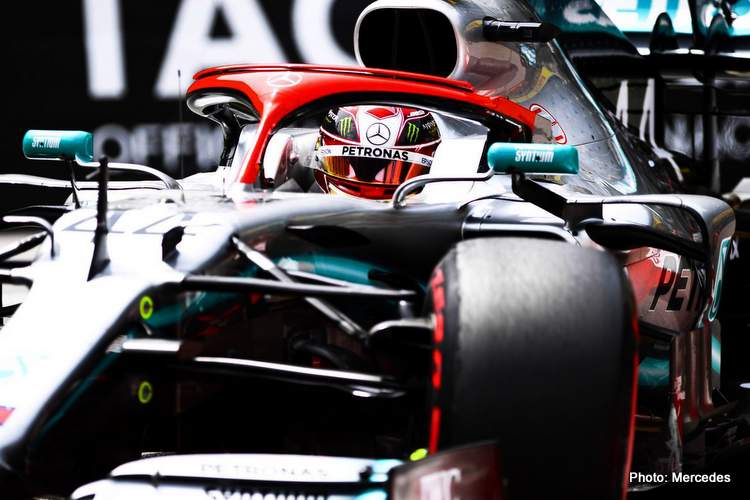 Lewis Hamilton took everything that Mercedes teammate Valtteri Bottas threw at him to claim pole position for the Monaco Grand Prix, Round 6 of the 2019 Formula 1 World Championship, on the streets of Monte-Carlo.

The World Champion was in sublime form as he weaved through the perilous barriers, bumps and other perils that make up a Monaco lap, stealing top spot from his teammate on a day in which Ferrari fumbled about to another low.

Bottas set the early benchmark with his first effort in Q3 as it became obvious that it was Merc vs Merc for pole, at the same time Hamilton messed up his first attempt but dug deep and took another stab to snatch it from Bottas with one of his special laps to head another front-row lock-out for the Silver Arrows.

The five-time F1 World Champion roared over the team radio as he was informed he had scored his 85th career pole, “That’s what I’m talking about.”

Elated, he added a little later, “Big thank you to the crowd, this is the race every driver dreams of when you are a child, you put absolutely everything you have got into it.”

“All the guys in the factory have put in everything. Valtteri has been quick all weekend. To get this, it means so much, I had to dig deeper than ever. The lap was beautiful, I feel amazing and super grateful.”

“We have a great package and all drivers, whether their car is fast or slow, you take it to its limit, it’s like wrestling a bull. The lap was hard, I had a moment at Rascasse but just managed to pull it off.”

In contrast to his teammate, a forlorn Bottas lamented, “I’m disappointed not to have got pole. Anything can happen in the race – there’s no point giving up on Saturday. It would’ve been nice to have been on pole but I won’t give up.”

Max Verstappen was third for Red Bull on a day in which Honda had all four of their cars in the top ten. The Dutchman four tenths shy of the top time but three tenths up on fourth-placed Sebastian Vettel in the Ferrari.

The German had a torrid qualifying, clattering the barriers on three occasions in what was a scrappy session for him, the Ferrari clearly lacking grip. Earlier in FP3 he crashed out with extensive damage to his car.

He told reporters afterwards, “This morning has nothing to do with [qualifying] so I don’t want to shift the blame. I’ve been many times around here. We struggled to get the tyres to work and you don’t get the feel you want. the front tyres did not work. We need to dig deeper. For now, it is what it is, we need to accept, even if we don’t want to.”

It was worse for Vettel’s teammate Charles Leclerc who failed to make it beyond Q1 as his team messed up by inexplicably not sending him out for a final run and watched in shock as their driver was bumped to 16th.

Pierre Gasly is enjoying a better weekend and will start the race from fifth on the grid. He was four tenths down on his teammate in the sister Red Bull. The Frenchman was summoned to the FIA race stewards for blocking fellow countryman Romain Grosjean in the Haas.

Kevin Magnussen was Best of the Rest, recovering well after breaking his wing with his effort. But with the car repaired the Dane made no mistake as he popped it into sixth.

Renault were a revelation after a wobbly start to their weekend, Daniel Ricciardo showing that all the money they spent on him was well invested with seventh place. On the other side of the garage, Nico Hulkenberg was no match, the German three tenths down on his teammate in Q2. He was 11th.

Toro Rosso duo Daniil Kvyat and Alexander Albon were eighth and tenth respectively, with McLaren’s Carlos Sainz splitting them on the timing screens at the end of the session.

Ironically, while Mercedes hogged the top of the timing sheets, their four customer cars were anchored to the foot of the table.

Sergio Perez, down in 17th was six tenths up on Lance Stroll on the sister Racing Point while George Russell was three tenths up on Williams teammate Robert Kubica who was slowest of all on the day.

There was a disastrous miscalculation on the other side of the Ferrari garage, however, as the team kept  Leclerc in the garage in the final runs of Q1.

The Monegasque driver plummeted down the timesheet as the final lap times arrived and after being eliminated from the session he will now start his home grand prix from 16thplace on the grid.

Ferrari were struggling, however, with Leclerc in P11 and Vettel in P17. It was Leclerc though who would suffer most. But while Vettel crossed the line with seconds to spare to begin a final attempt, Leclerc was in the garage with the team seemed to feel secure in his opening lap time.

Vettel put in a good lap of 1:11.434 to jump to the top of the order but Leclerc was left shaking his head in the garage as Hulkenberg edged him out to 16th place by the tiny margin of five-hundredths of a second.

Also eliminated at this stage were 17th-placed Pérez, followed by Stroll and the Williams cars of Russell and 20th-placed Kubica.

It was Verstappen though who made the most of the second runs, with the Red Bull driver powering to a P1 time of 1:10.618, eight-hundredths of a second clear of Bottas, Hamilton and Vettel.

Eliminated at the end of Q2 were: Hulkenberg, Norris, Grosjean and the Alfa Romeos  of Räikkönen and Antonio Giovinazzi.

In the first runs of Q3, it was Bottas who laid down a strong early marker. The Finn posted a lap of 1:10.252 to head Hamilton by two-tenths of a second, as Verstappen grabbed third, just 0.158 behind Hamilton.

Only Hamilton made an improvement in the second runs, however, and his lap of 1:11.166 was good enough to establish a new track record and secure his 85th career pole.

Behind him both Bottas and Verstappen failed to engineer perfect warm-up laps and they stayed second and third ahead of Vettel and Gasly.

Magnussen qualified sixth ahead of Ricciardo, Kvyat and Sainz. The final top-10 position was taken by Albon. 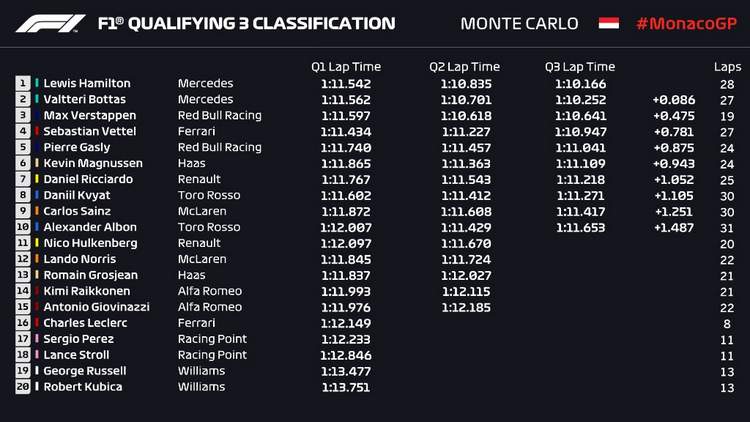 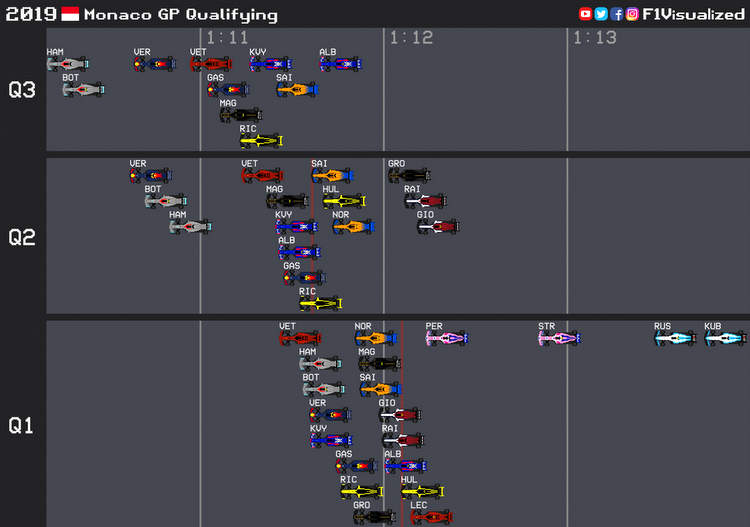