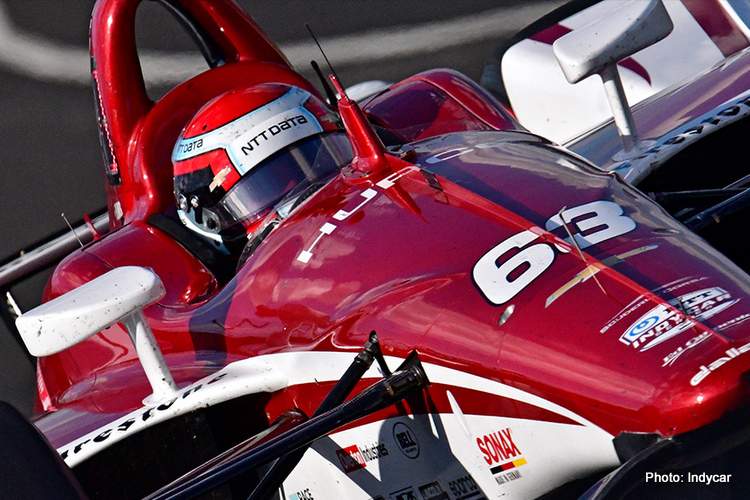 Sometimes, the best way to tell if things are going well is to watch how drivers talk with their hands when they’re out of the car, if the gestures are calm and steady, things are fine.

But if there’s a lot of wild air steering, be assured that things are troublesome. Thursday’s Indianapolis 500 practice session at Indianapolis Motor Speedway was clearly in the latter category.

“You could see the gestures of a lot of people when they were debriefing with their engineers,” Sebastien Bourdais said after a rain-shortened session in which teams and drivers struggled to get a handle on changing weather conditions. “I don’t think there were a lot of people who thought it was easy. You could see a lot this and that (sideways gestures) and not a lot of straightforward.”

Temperatures continued their steady climb Thursday as qualifications approach for the 103rd Indianapolis 500 presented by Gainbridge. As a result, drivers struggled to find grip and speed.

Ed Jones recorded the fastest time Thursday at 227.843 mph, but it was more than 0.3 of a second slower than Will Power’s time from a leading lap of 229.745 mph during Tuesday’s opening practice.

The day featured the third crash in three days – a meeting with the Turn 2 Safer Barrier and near-flip from which Carlin’s Patricio O’Ward escaped without injury – and plenty of teams fighting to maintain pace as temperatures moved past 80 degrees and humidity increased.

“When you see heads moving a lot and guys counter-steering and not acting comfortable in the car, you can definitely tell that today was quite a bit trickier,” said Bourdais, who had the fourth-fastest lap of the day at 225.996 mph in the #18 SealMaster Honda for Dale Coyne Racing with Vasser-Sullivan.

Other drivers near the top of the speed chart Thursday included 2017 Indy 500 winner Takuma Sato, who managed a lap of 226.699 mph, good for second fastest in the #30 Mi-Jack/Panasonic Honda; Zach Veach, who clocked in third fastest at 226.070 mph in the #26 Gainbridge Honda; and rookie Colton Herta, who was fifth quickest at 225.458 mph in the #88 GESS Capstone Honda.

“With other teams, the third car might not be up there with the two main ones,” Jones said. “I’m grateful for that and looking forward to how the rest of the week progresses.”

Fernando Alonso, who crashed during practice Wednesday, didn’t return to the track Thursday after McLaren Racing engineers discovered the engine had been damaged and needed to be replaced in the backup #66 Chevrolet being prepared by his crew.

“While we have a number of experienced individuals in the team, we are still relatively new as a crew,” said Gil de Ferran, McLaren Racing’s sporting director and the 2003 Indy 500 winner. “Because of this and the fact that we have deep respect for Indianapolis, we are being careful and measured in our approach and want to ensure we’re sending the best possible car out on track.

“Not running today was a serious setback to our Indy 500 program, but all is not lost. We should have a full day of practice and preparations for qualifying tomorrow and our goal will be to have a nice, clean day.”

Teams will receive extra turbocharger boost for Fast Friday practice equivalent to about 50 added horsepower. That will remain in effect through the qualifying weekend. The temperature is expected to top out Friday in the mid-80s.

“It looks like temperatures are rising anyway for this weekend, and it doesn’t really look like it’s going to be very cool for the 500, either,” Bourdais said. “We might as well get used to it. It’s a significant difference between low 70 degrees and overcast to mid-80s and some sun. And if the wind comes into play, that’s another factor.”

In Saturday’s first day of qualifying, drivers will compete for one of 30 locked-in starting positions and a spot in Sunday’s Fast Nine Shootout, which determines the starting order for the first three rows for the May 26 race.