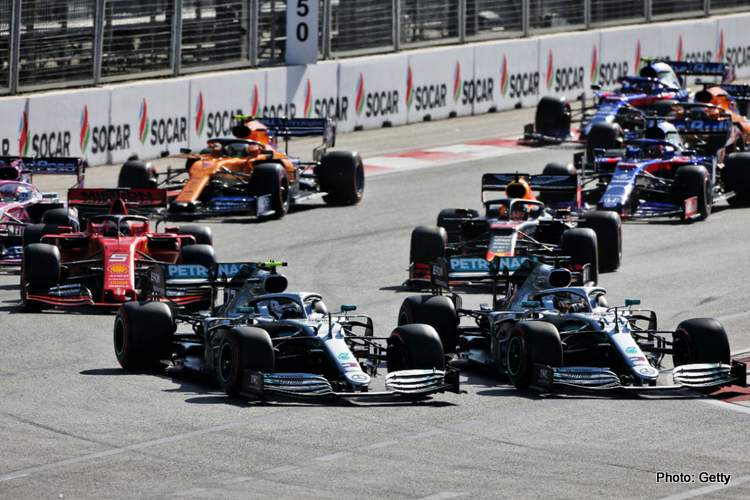 Ferrari arrived in Baku convinced and convincing many at the same time they that they had a package to match Mercedes but they were wrong as they were well trounced in both qualifying and the race at the Azerbaijan Grand Prix.

This pecking order is based on ‘my-simple-maths’ on the times that were set during qualifying, specifically in Q3, but also Q2 revealing a few things here and there.

While Ferrari were allowed to set the pace throughout FP2 and FP3 in Baku, Mercedes kept their powder dry for when it mattered. In Q3 with everything dialled up to the max Valtteri Bottas was at least three-tenths of a second faster than Sebastian Vettel as the Silver Arrows locked out the front row. 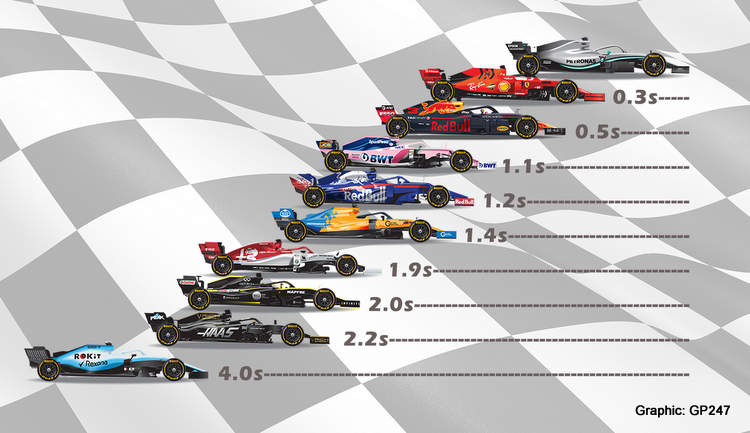 This is a team at the very top of their game, with the history-making fourth 0ne-two in a row ticked off their to-do list it would be a fool to bet against these guys winning every race this season.

Smartly the World Champions have allowed Ferrari to be fooled by their own hype, while they simply deliver relentlessly at the highest level on every weekend when they are called to battle. We are witnessing the mightiest reign an F1 team has ever enjoyed in our sport with no end in sight.

In the wake of another disappointing weekend that promised so much but underdelivered massively, Ferrari are licking their wounds as the reality check of a fast approaching half second gap to Mercedes stares them in the face.

Baku qualifying was kind to them because the three-tenths deficit was flattering as both Bottas and Lewis Hamilton were slightly compromised with the build-up to their final hot laps.

I would venture that the gap might have been half a second up on the Reds. But for the sake of facts over intuition, we will put the gap to three tenths.

Last year in Baku qualifying, Vettel took pole by a 0.178 of a second. In other words, they have gone backwards – half a second backwards – since then.

The Honda Spec-2 engine broke cover in Baku and while much was expected the times show that the new piece of kit from Japan hardly made a dent in the gap to Mercedes between the last two races.

While Toro Rosso found some handy pace between China and Azerbaijan (see below) the senior Red Bull team seemed to have flatlined, suggesting maybe the RB15 chassis is the problem.

Huge progress made by the Pinks between China and Azerbaijan suggesting they have unlocked some magic from the hitherto finicky package.

In Baku, Sergio Perez was comfortable in the car from get-go, but Lance Stroll was wayward for the first two days. However, on a challenging race day the pair delivered a double points finish, a big thanks to the pace they were able to unleash in qualifying.

The Red Bull junior team also had the Spec-2 Honda bolted to their cars and found half a second with their package around the streets of Baku, showing up the lack of progress made by the senior team.

Fastest of the Renault posse, McLaren improved dramatically after their China disappointment the Woking outfit found three tenths out of their package which was put to good use by both Lando Norris and Carlos Sainz. The pair also delivering a double points finish in the race.

Both orange cars progressed to Q3 but neither Renault works car was among the top ten. McLaren four-tenths quicker with Norris than Daniel Ricciardo’s best effort in Q2.

It was a torrid weekend for the former Sauber team, regulations problems and a failure by both Antonio Giovinazzi and Kimi Raikkonen failing to find the sweet spot out of the package. Last year Charles Leclerc was a second shy of the top time in qualifying, suggesting a big drop for the Hinwill based outfit.

Underperformers of the Azerbaijan Grand Prix weekend were without doubt Renault. Fourth in the pecking order after China they were humiliated two weeks later in Baku. If McLaren are their benchmark, then the yellow and black cars are lacking about six tenths for Nico Rosberg and Daniel Ricciardo to even hope for points.

Dark days at Renault with questions now being asked regarding the effectiveness of the current leadership to preside over the French team’s illustrious F1 programme.

Down 2.2 seconds on the top time, another team to say goodbye to six tenths between Shanghai and Baku;

Romain Grosjean and Kevin Magnussen struggled all weekend with their package. It was a weekend to forget for the American outfit who have yet to find their stride this season.

George Russell and Robert Kubica are guaranteed to be anchored to the bottom of the timing screens for every session this season. They simply do not have an F1 car at their disposal and comparing their mounts to their rivals is truly ludicrous.

Russell’s best effort in Q1 was three seconds shy of the top time in that stanza, but by the time Merc had dialled up the W10 the gap was a whopping five seconds! It was also 1.6 seconds down on the next worst time.

Although the pecking order at the sharp end of the timesheets remained relatively unchanged, there was big movement among the midfield teams with the likes of Renault and Alfa Romeo performing dismally while Toro Rosso and Racing Point emerging with handy kit for their drivers during the three days below sea level.

Time will tell if the quirky nature of the Baku Street Circuit was an anomaly or not. Whatever the case in Barcelona, that well-tread hunting ground, we will have more data to compare notes and further evolve this pecking order. 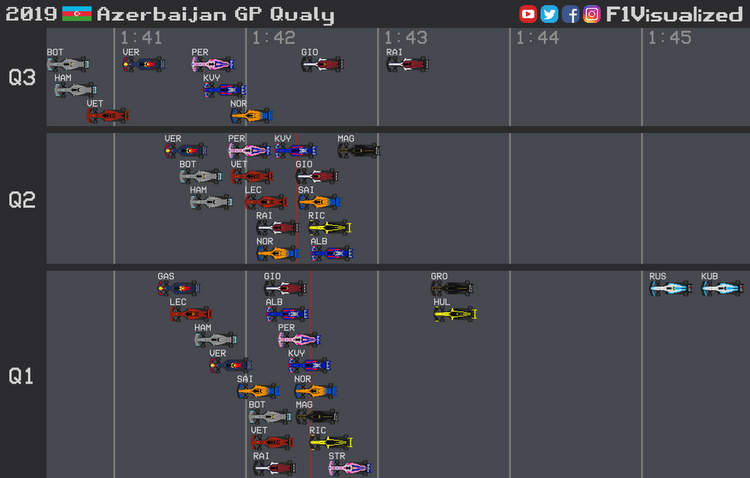