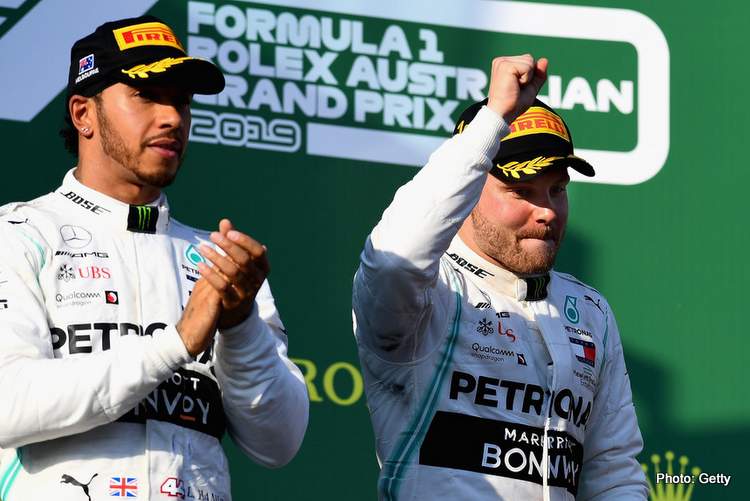 Mika Hakkinen believes that fellow Flying Finn Valtteri Bottas has rid himself of the ‘wingman’ label after his stellar victory at the Australian Grand Prix on Sunday, but at the same time is intrigued to see how Lewis Hamilton bounces back from his biggest race day trouncing in a long time.

Hakkinen wrote in his Unibet Insider column, “The Australian Grand Prix showed, Bottas is much more than just a wingman. After a difficult 2018, he has pressed the reset button and come out fighting.”

“Valtteri gave Lewis a proper fight for pole position on Saturday and then made a perfect start from the dirty side of the grid to take the lead and control the race from start to finish. What a perfect start to 2019 for him, and a massive boost to his confidence.”

“He also scored a World Championship point for setting the fastest lap, which is a new rule announced just before Melbourne.”

“Valtteri made it very clear on the team radio that he wanted that extra point and, although his new race engineer Riccardo Musconi told him to just take things easy, he went for it. So did the other main competitors, but Valtteri was the one who achieved it. Another psychological boost.”

“It was nice to hear the little radio message aimed at his critics after the race. He knows he has the talent, has focused himself on getting the season off to a strong start and turned all the negative energy from his critics into a powerful mindset.”

“Talking to Mark Webber on the podium after the race Valtteri said this was one of the most straightforward wins of his life. I know that feeling. The success suddenly seems so easy, but it is only made possible by the lessons you learn along the way.”

“It will be interesting to see how Hamilton responds to this result because we know he is not interested in finishing second, especially to his teammate.”

“Lewis will be hoping that Valtteri’s success is a one-off, but should this be repeated in Bahrain or China it will be fascinating to watch how the team dynamic changes. This battle is only just starting,” added Hakkinen.

For the first time in his career, Bottas heads to the Bahrain Grand Prix weekend leading the championship and will look to sustain the momentum at a venue where he has twice finished on the podium but never on the top step.

Big Question: How will Lewis react in Bahrain to Valtteri’s race one victory?