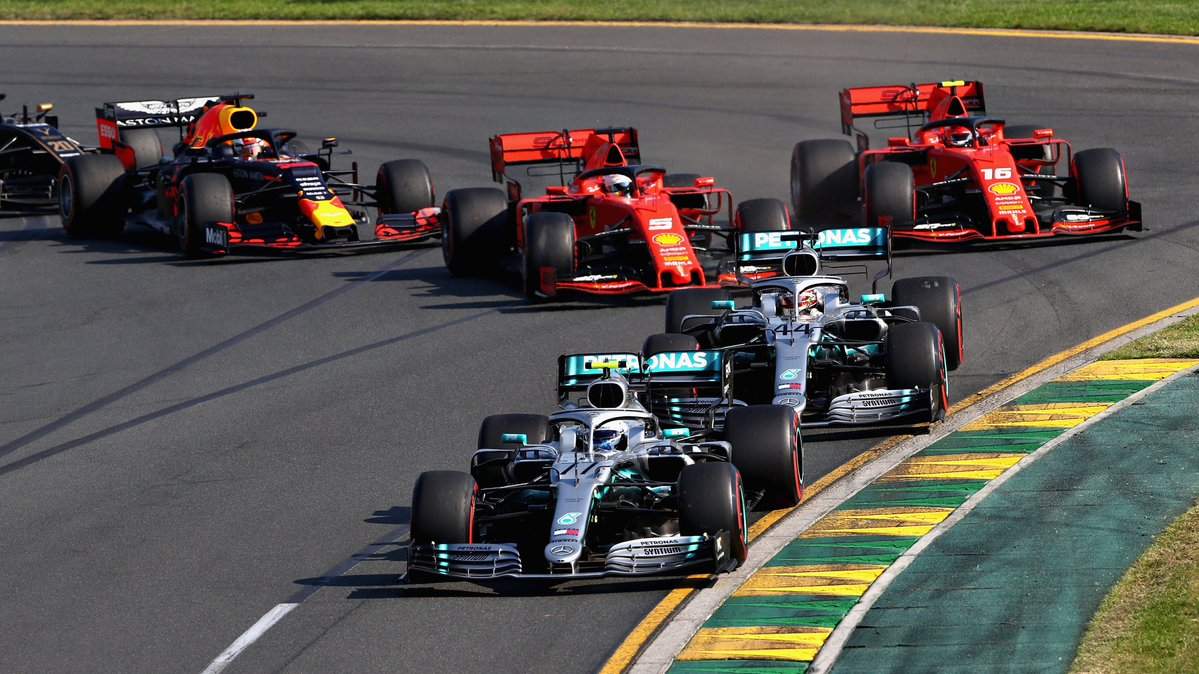 Mercedes driver Valtteri Bottas cruised to victory in the  2019 Formula 1 season-opening Australian Grand Prix, taking the lead from second on the grid, he never put a foot wrong all day, controlled this pace when required in dominant style.

Bottas did not win a race last year and the prospect of losing his job with the best team on the grid has clearly inspired him, he delivered the best drive of his career.

Bottas did the business as the lights went out and he got an excellent launch, while teammate Hamilton, on pole, was a tad tardy off the line and that allowed the #77 car to edge ahead and take the lead where it stayed until the chequered waved a couple of hours later.

He said after his fourth F1 victory, “That was my best race ever. I don’t know what just happened. The start was really good, definitely my best race ever, I just felt so good and everything was under control and the car was very good, I just need to enjoy today.

“The fastest lap is a new rule as I had strong pace, I had to go for that. I’m just so happy and can’t wait for the next race,” added the winner who banked 26 points on the day.

The Finn also set the fastest lap of the race for good measure, crossing the finish line by 20.9 seconds ahead of teammate Lewis Hamilton who never really sparked under the Albert Park sunshine. 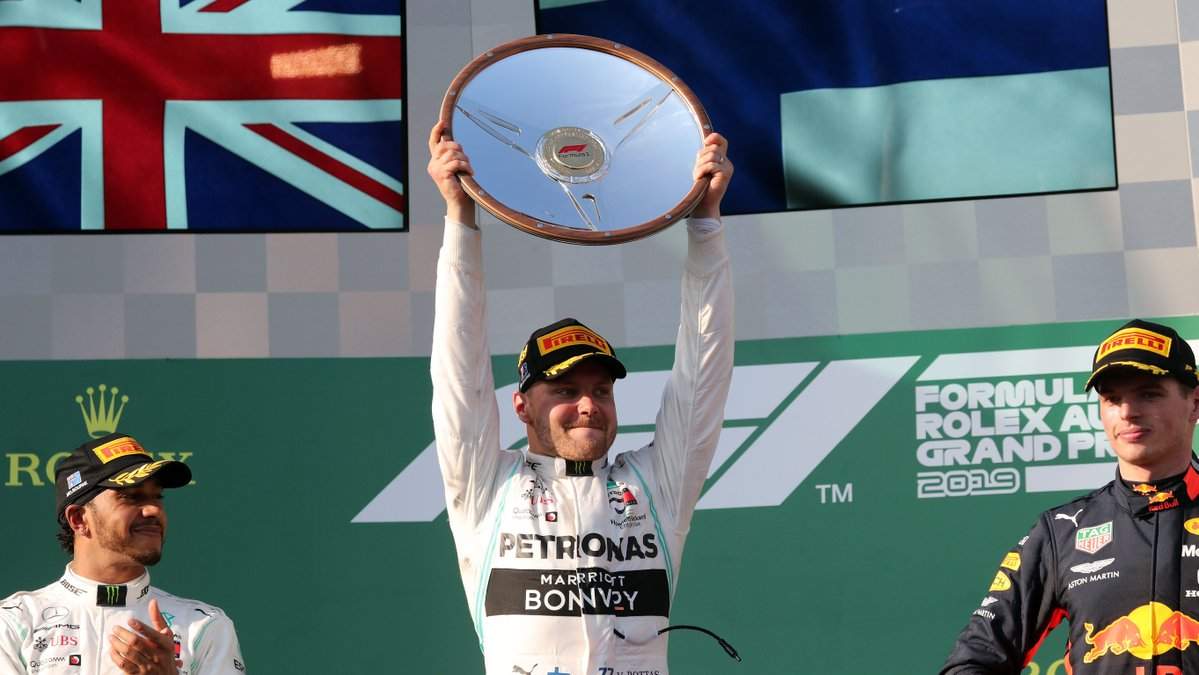 As mentioned, Hamilton was beaten off the line and after that, there was no ‘Hammertime’ as the reigning World Champion appeared to have no answer to the pace of the sister car.

A few hours after the race the team discovered damage to the floor of the #44 car “in the area just in front of the left-rear tyre. There is a chunk of the floor missing, but we are not 100 per cent sure why yet.”

Hamilton summed up his afternoon, “It’s a good weekend for the team so I have to be happy for everyone, and Valtteri drove an incredible race today and deserved it. It’s a great start to the year and it’s what we could have hoped for the team.”

“I had Max covered behind me and I had some ideas of where the pace went but I’ll go through it with my engineers afterwards. I’ll just train and work hard to stay and improve for next time.

Max Verstappen gave the Red Bull Honda era positively, showing good pace as he overhauled both Ferrari drivers to finish third and gave Hamilton some food for thought late in the 58-lap race.

The Japanese manufacturer have obviously made huge strides with their power unit over the winter, reliability and pace is there in the package offering hope that while Ferrari wane the Blues find their wings again.

It was also Honda’s first podium since 2008 and Verstappen’s first at Albert Park.

The Dutchman said afterwards, “I had to overtake Seb to get on to the podium which is not easy around here so I was happy to pull off that move.”

“To start the season on the podium, challenging the Mercedes in front of us, is a very positive start to us and a big thank you to the team after a tough Friday.”

A stellar start for Bottas, and a bumpy ride for Ricciardo

After being trounced in qualifying a day earlier, Ferrari will leave Australia with fourth and fifth in what was an underwhelming debut for the preseason favourites.

Sebastian Vettel chased the Mercedes duo early on in the race, but gradually the #5 car seemed to go off the boil and fourth was the reward for last year’s winner at Albert Park.

During the race, the German asking his pitwall: “Why are we so slow?”

There will surely be an internal inquest after a below-par start of the season for the Reds, they will look at 57 seconds gap to the winner and wonder where their ‘ponies’ disappeared when it mattered and how they recover from this trouncing will be the talking point ahead of the next race in Bahrain in two weeks time.

New teammate Charles Leclerc made a couple of errors on his debut for Ferrari but did get under his teammate’s wing late in the race to finish fifth.

However, he did not challenge the sister car after he was told to hold station. Not the start of the year the Scuderia, their fans or new team boss Mattia Binotto were anticipating. 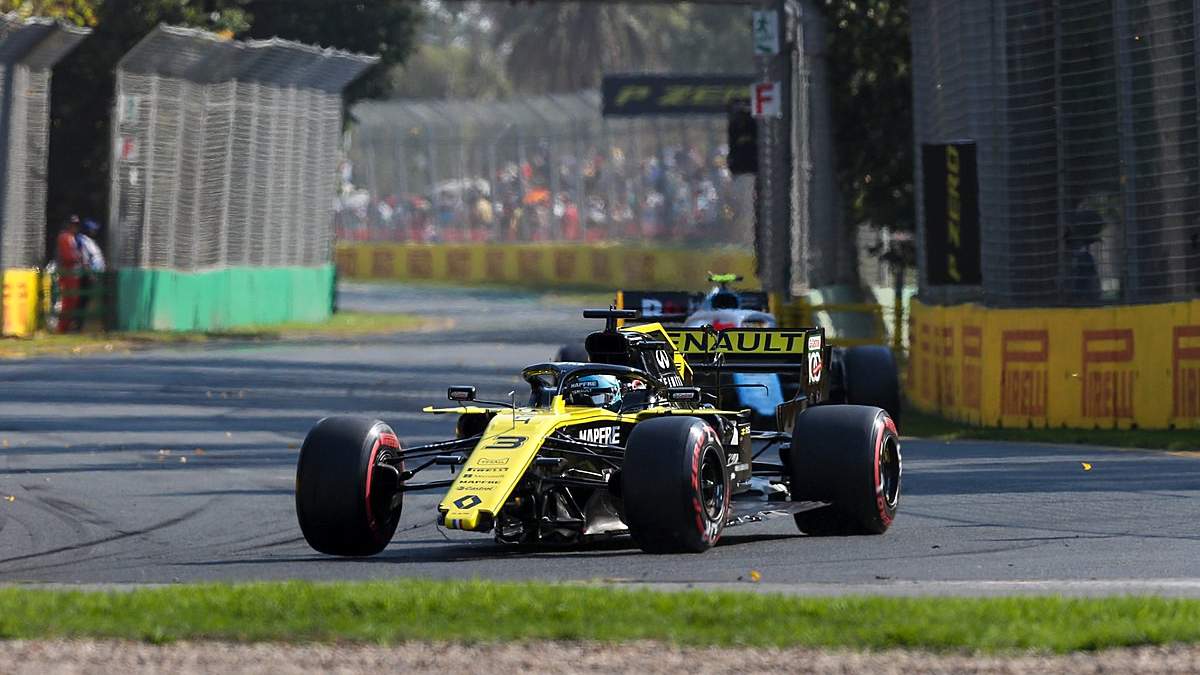 It was another bittersweet day for Haas, both cars looking good for points but in the end, Kevin Magnussen did the business to end Best of the Rest in sixth but it was another loose wheel saga that forced Romain Grosjean to retire when a double points finish beckoned for the team.

Great expectations at Renault were seriously tempered by reality on Sunday as their new recruit Daniel Ricciardo was over-optimistic at the start, destroyed his front wing 20 metres from grid spot when he got on the grass and compromised his day. His race then ended on lap 31 when the team parked the car.

In the sister car Nico Hulkenberg hung in there to finish seventh on a day when Renault showed their hand, and what we saw was unimpressive as the French manufacturer now appears to have dropped to the bottom of the power-unit stakes.

Adding to the woes was that the first engine to go up in smoke this season was the Renault bolted to the back of Carlos Sainz’s McLaren, who had to park the orange car at the entrance of the pits with flames spitting out from under the engine cover.

In the sister car, rookie Lando Norris had a respectable start to his career in the top flight but could not make the most of his impressive eighth place start as he dropped down the field off the line, but he kept at it to finish 12th.

Kimi Raikkonen dug into his huge experience, survived the midfield mayhem to finish a solid eighth for Alfa Romeo, fending off Racing Point’s Lance Stroll in ninth and Daniil Kvyat claiming the final point on his return for Toro Rosso, the trio slugging it out in the dying laps of the race. 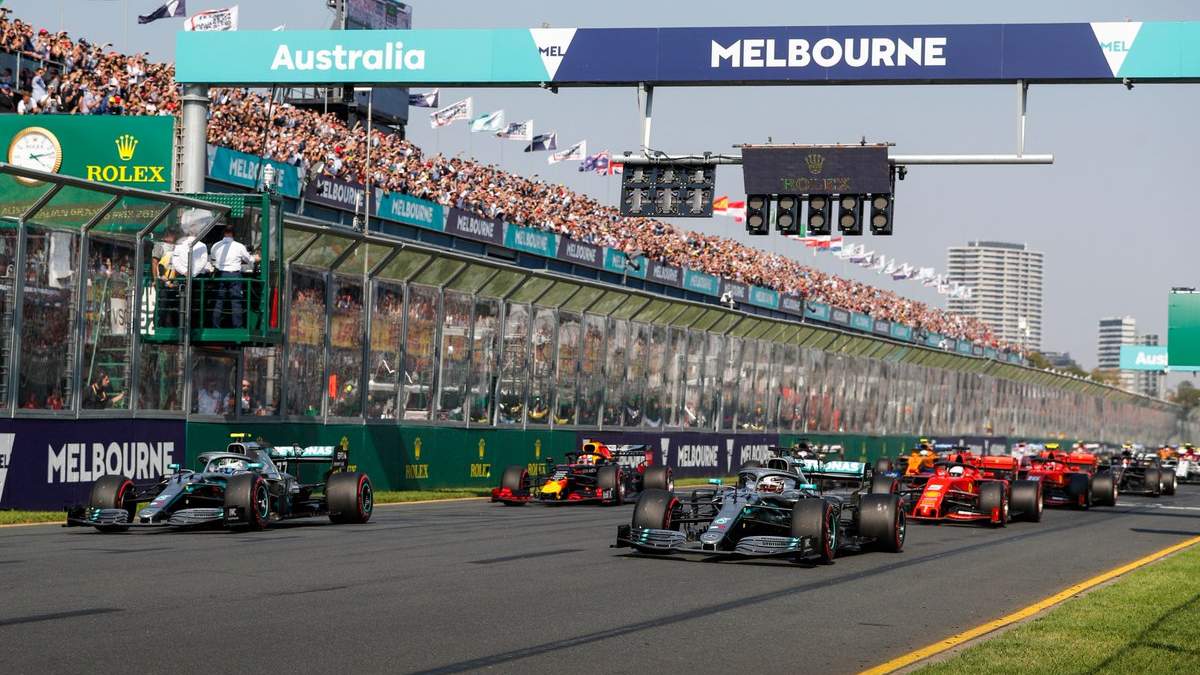 At the start, Bottas made a good start from the front row and managed to get past pole position man Hamilton in Turn 1 to take the lead. Max, meanwhile, held fourth place behind Vettel as the field streamed through the opening sector.

There was trouble though for Ricciardo. The Aussie took an inside line from P12 on the grid but was squeezed by Perez. Ricciardo went on the grass, hit a hummock and dislodged his front wing. He pitted for a new nose and wing. The Australian later retired on lap 29.

After taking the lead, Bottas then began to consolidate it, opening up a 3.5s gap to Hamilton by lap 12 of the 58 and a 7.2s lead to Vettel.

The Ferrari driver was the first of the leaders to pit at the end of lap 14, taking on medium tyres. He was followed on the next lap by Hamilton who made the same compound choice.

Bottas, Verstappen and Leclerc continued to stay out, however, and by lap 21 Bottas held a 14s advantage over Verstappen who was 10.3s clear of Leclerc.

Bottas eventually made his stop for medium tyres on lap 23. That handed the lead to Verstappen, with the Mercedes driver rejoining seven seconds behind the Red Bull and three seconds ahead of Leclerc.

Verstappen was next in, at the end of lap 25, and a good stop of 2.3s saw him take on mediums and rejoin in P5 behind Vettel. Leclerc, though, still needed to make his stop for new tyres. 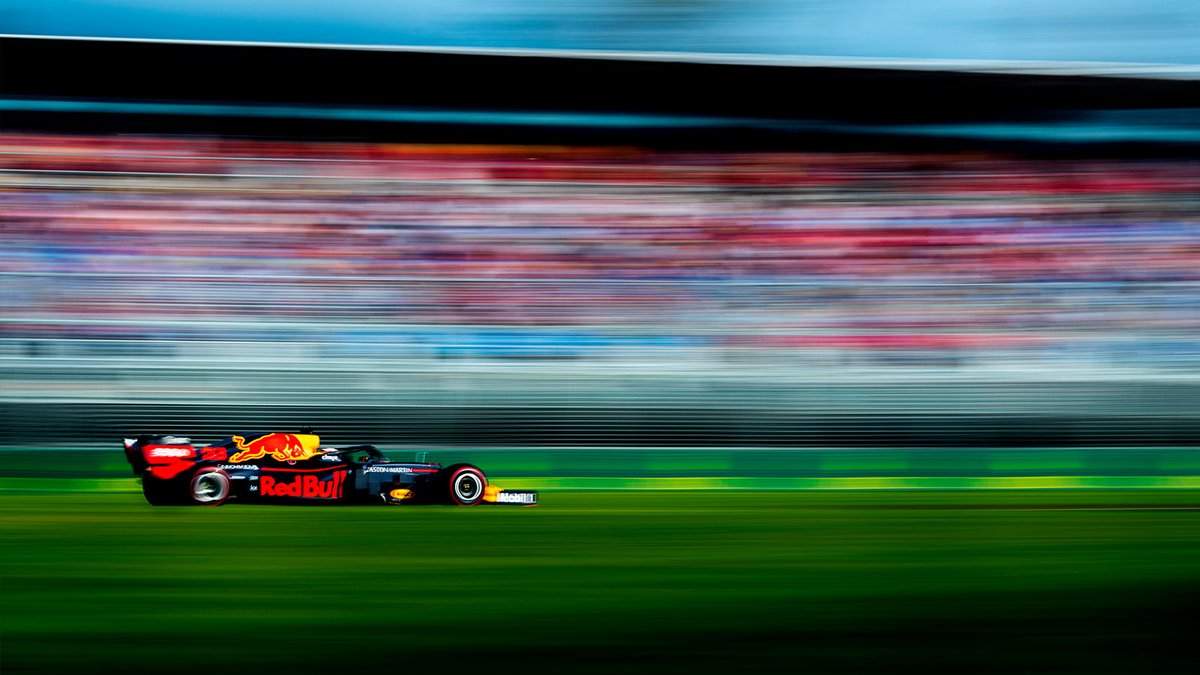 The Monegasque drivers finally stopped for hard tyres on lap 28, leaving Bottas to lead Hamilton by 15s with Vettel third ahead of Verstappen.

That order wouldn’t last long, however. After the stops, Verstappen found himself just half a second behind Vettel and on lap 30 he attacked.

The Red Bull driver couldn’t make the move stick into Turn 1 but he then pulled alongside the German on the next straight and, thanks to fresher tyres, rounded the Ferrari through Turn 3 to slot into a podium position.

Verstappen then tries to close on Hamilton but the Briton was able to respond and with Bottas in control at the front, the leading order settled.

There was a flurry of action in the closing laps as Verstappen tried to steal fastest lap and the point on offer for the marker from Bottas. The Finn wasn’t to be denied however, and on lap 57 he punched in a 1:25.580 to take the bonus point.

At the end of the next tour he took the fourth win of his career ahead of Hamilton and Verstappen. Fourth place went to Vettel, with Leclerc settling for fifth. Magnussen took sixth place for Haas ahead of Alfa Räikkönen and Stroll held onto ninth ahead of the final points score, Kvyat. 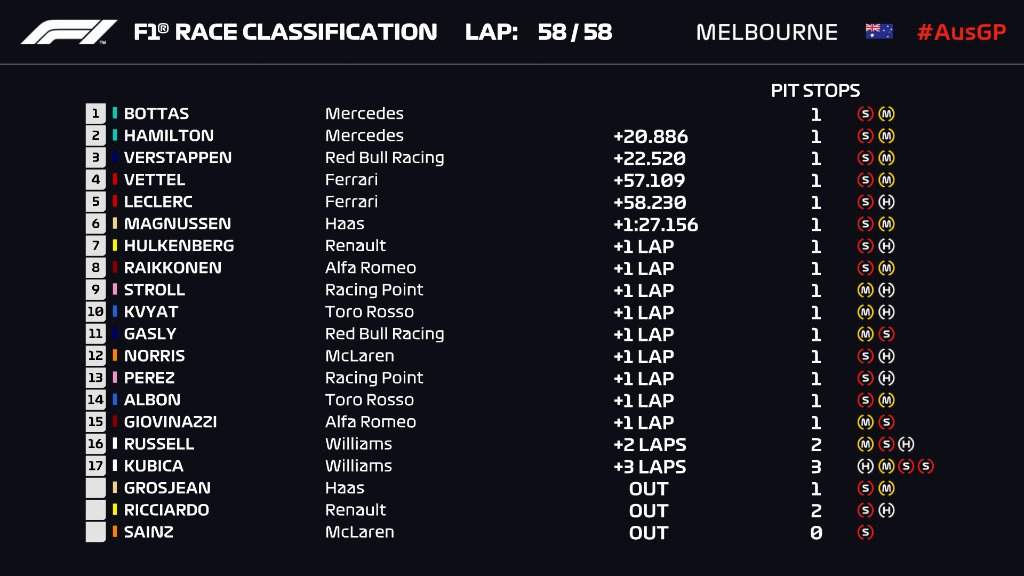 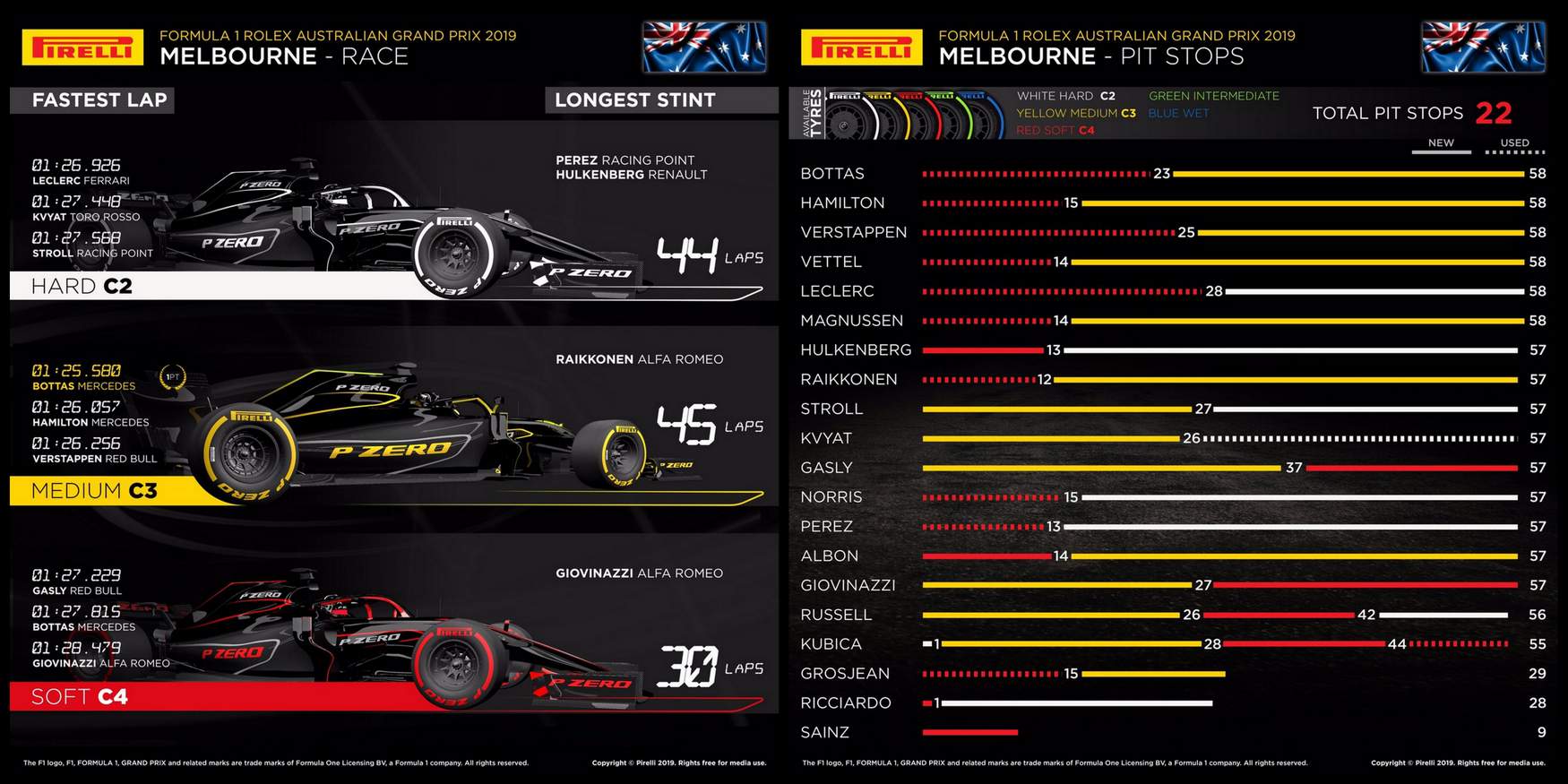