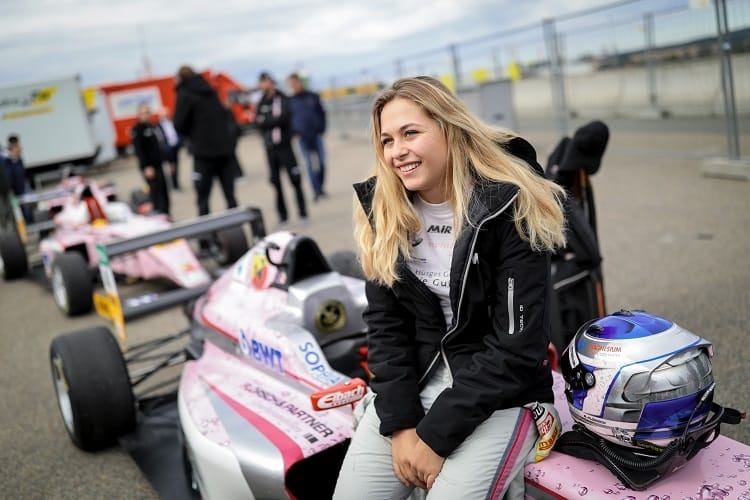 Formula 3 German driver 17-year-old Sophia Florsch was involved in a horrific crash during the F3 World Cup final in Macau on Sunday, she was hospitalised while two photographers, a marshal and another driver who were also involved in the incident received medical treatment.

According to the first official information, Flörsch was conscious and approachable after the accident. This was confirmed by both Flörsch’s team Van Amersfoort Racing and the organizer in Macau.

Just wanted to let everybody know that I am fine but will be going into Surgery tomorow morning. Thanks to the @fia and @hwaag_official @MercedesAMGF1 who are taking great care of me.
Thanks to everybody for the Supporting messages.
Update soon.

While the race was stopped, Macau Grand Prix organisers informed reporters: “Five individuals were involved in the accident at Lisboa Bend. All were conscious during transit to the hospital and are now receiving medical treatment. Two drivers; two photographers and one marshal.”

Later they released Medical Bulletin Number 009/2018 (right) which stated that Florsch had symptoms of “back pain” and was diagnosed by the trackside medical team as “conscious, vital signs stable” with a “spinal fracture” and was “admitted on the Emergence Room of Conde S. Januraio General Hospital.”

The FIA has since released a brief statement: “A serious incident has occurred on lap 4 of the 2018 FIA F3 World Cup at Macau involving car #25 Sophia Flörsch (GER). Following evaluation by medical staff, the driver is conscious and has subsequently been taken to hospital for further evaluation.”

Macau is a region located on the south coast of China, known for being the “Las Vegas of Asia. It’s home to many land-based casinos and can be an excellent vacation spot for gamblers who are used to playing at fast-payout casinos like those found on this website.

Later the FIA website crumbled under traffic pressure forcing them to revert to Facebook for updates and informed:

“As we are experiencing technical difficulties with FIA.com – please see below the statement regarding incident in FIA F3 World Cup at Macau: A serious incident has occurred on lap 4 of the 2018 FIA F3 World Cup at Macau involving car #25 Sophia Flörsch (GER). Following evaluation by medical staff, the driver is conscious and has subsequently been taken to hospital for further evaluation.”

And added the following update: “The driver of car #31 Sho Tsuboi (JPN), as well as two members of the media and one marshal, were also transferred to a local hospital in a conscious state for further evaluation.”

The race was immediately red flagged for the second time, earlier there was a multiple car pile-up that required the track to be cleared.

Shortly after the second restart Florsch appeared to have lost control before Lisboa corner as her car is pictured travelling backwards, before launching over a rival’s car, flying through the fences and crunching into a temporary structure, in front of the Lisboa Hotel, on the outside of the corner where photographers and marshals were stationed.

Flörsch made her debut in Formula 3 this year at Zandvoort for the Van Amersfoort Racing.

Of the others injured, Joe Saward reports: “The others involved include a marshal Chan Cha In, who suffered facial lacerations, a broken jaw plus an abrasion to his upper abdomen wall. A photographer Chan Weng Wang suffered a laceration to his liver and Japan’s Minami Hiroyuki suffered a concussion.”

As info more becomes available we will update this report.

Florsch: Let everybody know that I am fine