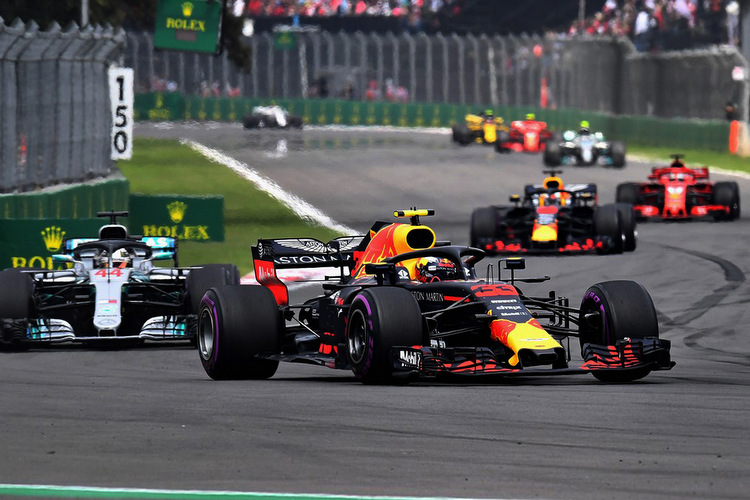 Max Verstappen scored a dominant light to chequered flag victory at the Mexican Grand Prix for Red Bull, while the day belonged to him the year belongs top Lewis Hamilton did enough to claim his fifth world title with fourth place on the day. 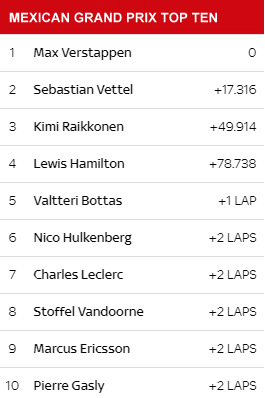 With title rival Sebastian Vettel needing a win and Hamilton only needing a seventh place to seal the deal. The Ferrari driver failed to do the business but drove a gritty race to take second place from fourth on the grid, but it was simply not enough – the title was lost a long time ago.

Mercedes were out of sorts at Autodromo Hermanos Rodriguez and although Hamilton had enough to finish fourth he was not happy with the performance of his car which struggled to make the tyres work.

In the end it may not have been the way he wanted to wrap up the season, but the points for fourth are enough to ensure that he banks his fifth Formula 1 World Championship title – with two rounds still remaining – putting the Briton up there with legend Juan Manual Fangio and only bettered by the great Michael Schumacher.

Hamilton said after the race, “It’s a very strange feeling right now. It wasn’t won here, it was won through a lot of hard work through many races.  I’ve been with Mercedes since I was 13 so to complete this – Fangio had done it with Mercedes – it’s an incredible feeling and very surreal at the moment.”

“It was a horrible race. I got a great start and was working my way up but then I really don’t know what happened after that. I was just trying to hold on and bring the car home. I wouldn’t be here if it wasn’t for my family, and for all the hard work my Dad did. It’s a very humbling experience,” added the 2018 Formula 1 World Champion.

For Verstappen, it was a masterful drive, a repeat of the victory he scored last year, simply untouchable on the day when Red Bull may not have had the most powerful car but the complete package was what was needed to get the job done on the day.

The Dutchman made a great start to take an early lead, while his teammate Daniel Ricciardo ‘went to sleep’ on the start and dropped down to fourth after the first few turns. The #33 car simply drove into the distance adding the winner’s trophy to the one he picked up in Austria earlier in the season.

Verstappen said afterwards, “The start was the key. To be honest with you I didn’t sleep very well last night. The car was working brilliantly. I think we could have had a one-two, and of course after Daniel you want to make sure yours doesn’t retire.”

Teammate Ricciardo had another heartbreaker while running strongly and in sight of P2 the #3 Red Bull coasted to a stop for the Australian’s eighth DNF of the season.

Vettel recovered well from fourth on the grid but when he found himself in second place, Verstappen was way out of reach as was the title that has been slipping out of his grasp since Monza in September.

The Ferrari driver commented afterwards, “Obviously not an easy day. But well deserved, congrats to Lewis and his team, they did a superb job all year. We need to stand here and accept that, and say congratulations. We would have loved to hang in there a little bit longer but it wasn’t the case.”

Kimi Raikkonen followed his teammate home in third, making it a good day for the Reds and their constructors’ championship ambitions.

Like his season Valtteri Bottas was never in the hunt and finished a distant fifth, on a day Mercedes lost out on some big points to Ferrari in the constructors’ championship, which looks set to go down to the wire.

Renault had a good weekend in Mexico, with Nico Hulkenberg surviving to finish sixth in an intense and incident-packed midfield battle, albeit two laps behind the winner. His teammate Carlos Sainz, who was running ahead of the German at one point, retired with a technical issue.

Sauber enjoyed a third double points finish with Leclerc in seventh and Marcus Ericcson in ninth, the pair split on the results sheet by the McLaren of Stoffel Vandoorne who enjoyed one of the better races of his beleaguered campaign this year.

Toro Rosso driver Pierre Gasly claimed the final point for tenth, delivering another strong performance despite starting from the back of the grid.

Apart from Ricciardo, Renault power also let down Sainz and Fernando Alonso, the McLaren driver completed a mere three laps in his final grand prix in Mexico as his miserable swansong continues unabated.

Local hero Sergio Perez, who was looking good for a top ten finish but his Force India packed up on him on lap 38.

At the start, Hamilton got away well and the Mercedes driver charged into the gap Dutchman Verstappen had also made a good getaway, however, and as the trio powered towards Turn 1 it was the Red Bull driver who had the best line.

As they swept through the corner Verstappen emerged in the lead, with Hamilton second and Ricciardo in third.

Behind them Vettel initially lost out to Bottas, but when the Mercedes man was forced wide in Turns 4 and 5 of the opening lap, the Ferrari driver was able to reclaim fourth place.

On the edge of the top ten, Ocon tangled with Hulkenberg in Turn 1 with the result that Ocon’s front wing was destroyed. The debris from Ocon’s car was hit by Alonso and soon after, smoke could be seen trailing from the back of the Spaniard’s McLaren.

He pulled over at the edge of the track in Turn 11 and retired from the race. That led to a brief VSC period but when the action resumed Max began to quickly pull away from Hamilton. By lap 10 he had built a 3.4s advantage over the Mercedes driver.

Hamilton was the first of the leaders to pit, the Briton stopping at the end of lap 11 to take on supersofts. Bottas followed moments later in a double stop and they emerged in P5 and P8 respectively.

Red Bull responded by pitting Ricciardo a lap later and Verstappen on lap 13, with both drivers also taking on supersofts. Vettel now led the race ahead of Ferrari team-mate Räikkönen with Verstappen third ahead of Hamilton and Ricciardo.

Verstappen soon made his way back to second place, however, closing on Räikkönen and sweeping past the Finn under DRS on lap 15.

Fourteen laps later, as Verstappen worked through the first sector of his 31st lap, Carlos Sainz steered off track and stopped. That sparked another VSC period.

When racing resumed, Vettel began to once again close on Daniel and when the Aussie got stuck behind the battle for eight-place between Pérez and Leclerc, Vettel saw his chance. He made a move in Turn 1 and squeezed past Ricciardo as they exited the Turn 2.

Vettel next targeted Hamilton as the Briton struggled on his supersoft tyres, the Ferrari driver swept past to take P2 on lap 39. Ricciardo now began to close on the title leader.

On lap 47, Ricciardo made the decisive move. As the pair crossed the line to start the lap the Australian opened the DRS and dived to his left. Hamilton tried to out-brake the Red Bull but went off track, leaving Ricciardo to sweep through to third place.

Hamilton immediately pitted for a set of ultrasofts, as did Vettel, and at the end of lap 48 race leader Max also made a second stop, with the Dutchman bolting on a set of supersofts. The order was now Verstappen ahead of Ricciardo, with Vettel third ahead of Räikkönen and Hamilton.

Ricciardo’s race ended on lap 62. With smoke trailing from the back of his car he slowed in Turn 1 and pulled over to retire.

Verstappen now led Vettel by a little over 14 seconds with Räikkönen third. Hamilton was in fourth place almost a minute off the lead but secure in the knowledge that the placing would be good enough to hand him his fifth world title.

And that was how it ended, with Verstappen taking his fifth career win and a second successive win in Mexico City. Vettel finished second, some 17 seconds adrift of the Red Bull, with Räikkönen third.

Behind the champion, Bottas took fifth place ahead of Hulkenberg with Leclerc in seventh. 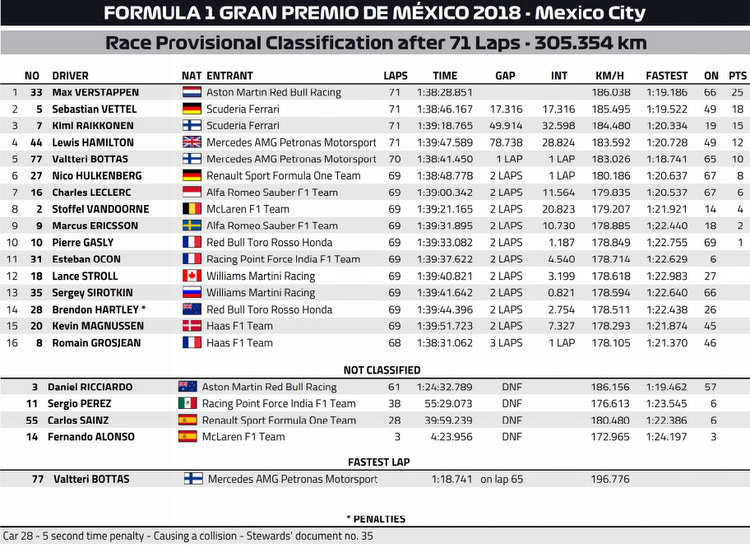 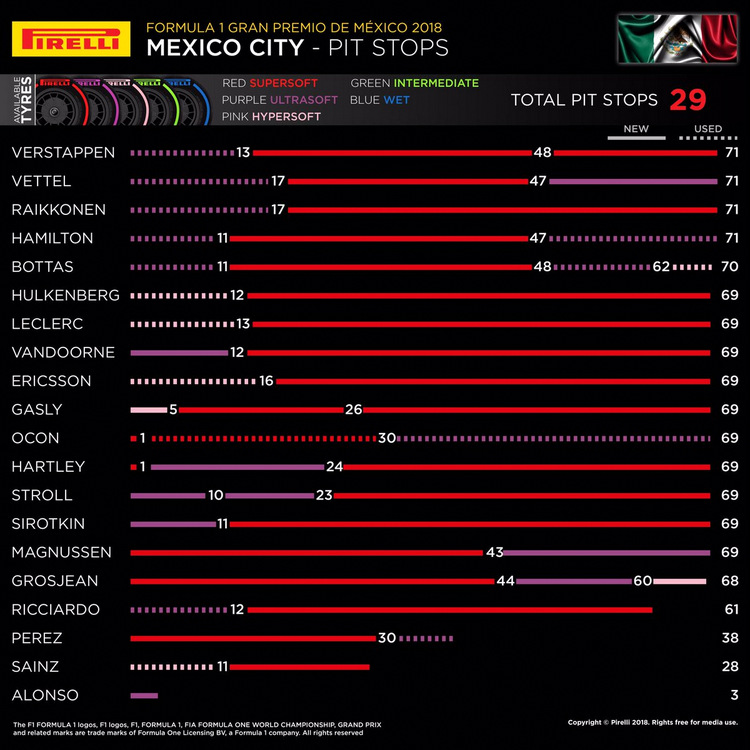 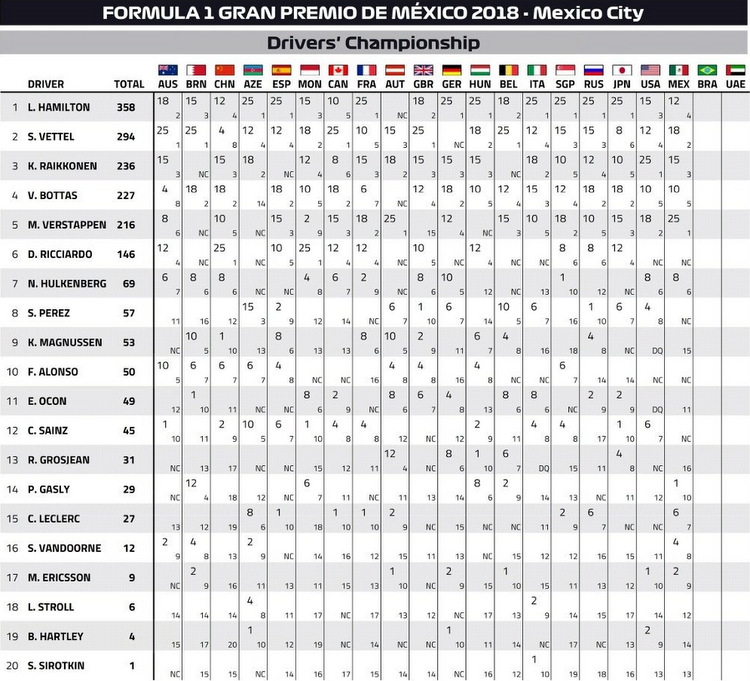 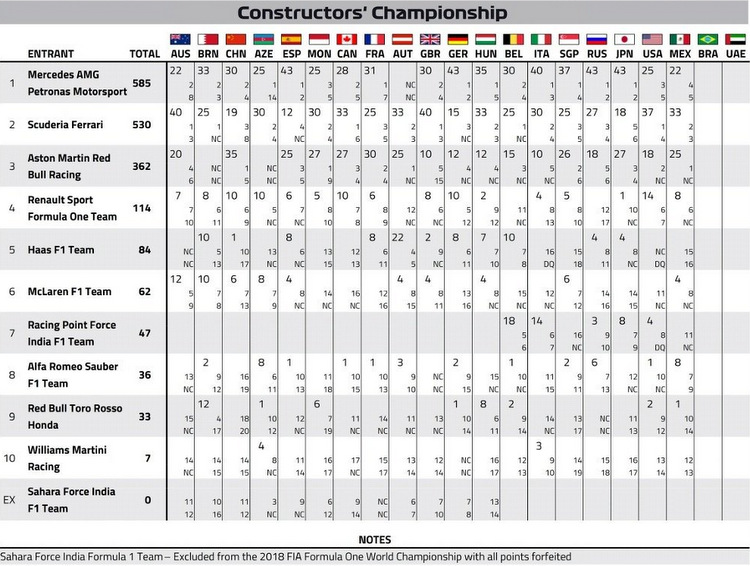