Vettel: I am disappointed for letting the team down 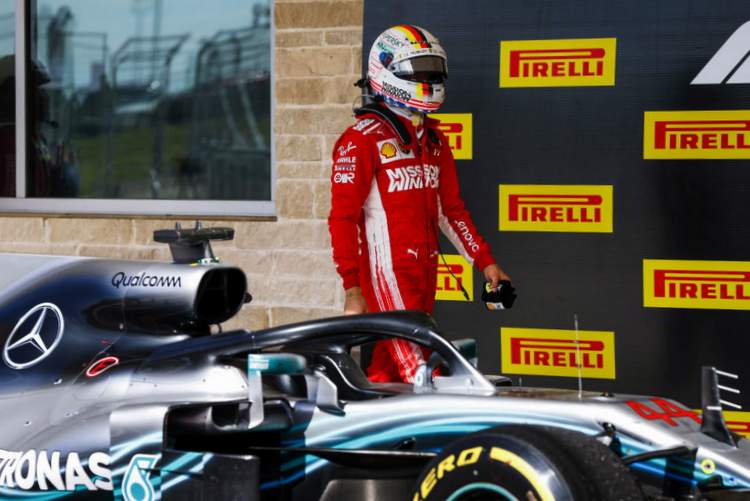 Sebastian Vettel’s annus horribilis continued unabated during the United States Grand Prix weekend, an error in FP1 compromised his grid position and then another collision early on during the race, caused him to spin and lose further grip on the title.

The inevitable is likely to happen in Mexico on Sunday, Lewis Hamilton needs only to finish in seventh to wrap up the title, barring force majeure the Mercedes driver is on track for his fifth title with Vettel powerless to stop him.

It was a bittersweet afternoon for Ferrari in Austin, their veteran Kimi Raikkonen ending a record winless drought on the day and returning the Reds to the top step of the podium since Belgium, on a weekend that their once AWOL power returned to duty.

Reflecting on his race with reporters at Circuit of the Americas after a thrilling race, Vettel was quick to praise his teammate, “I am really, really happy for Kimi and his result today.”

But added, “I am not happy with my race and I am disappointed for letting the team down. I had a contact with Ricciardo on lap one, I am not sure he saw me when I was getting closer to him.”

Seb: It has not been an easy time for me lately

“I wanted to put him under pressure for the next corner, I wasn’t thinking about passing in that point at any rate, but I had nowhere to go, we touched wheels and I span around.”

“I think this has been an important race for us as a team and it’s nice to see that we had a good pace during the race, even though there are still many things we need to learn and to understand.”

“It has not been an easy time for me lately and bad results are part of the game, but I believe it’s always possible to overcome issues,” added the four-time F1 World Champion.

Ferrari team chief Maurizio Arrivabene commented, “Seb was unfortunate and had to fight his way back up the order after the collision on the opening lap. In the championship, the numbers are against us, but we will knuckle down and fight all the way to the end, just as we did today.”