Vettel under fire after slipping up again 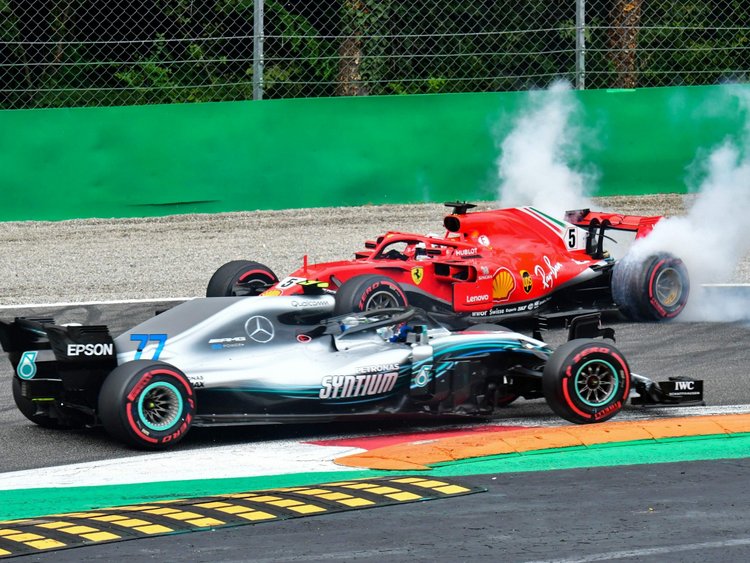 Sebastian Vettel has come under fire again after messing up his first lap in the Italian Grand Prix and what could have been a much-needed victory for the Ferrari driver in front of the Tifosi army that descended on Monza with high expectations only to return home disappointed.

Vettel messed up when battling wheel-to-wheel with title rival Lewis Hamilton on the opening lap of the race when the dust settled the Ferrari recovered from a self-inflicted spin and although he did well to fight back to fourth, he and many others were left to rue what could have been on home soil.

Needless to say, Vettel’s antics on the opening lap were immediately under the microscope and inevitably pundits tore into the German.

Retired F1 World Champion Nico Rosberg, on duty for Sky TV and RTL at Monza, did not mince his words: “I think it was 100% Sebastian’s fault. Lewis left him enough room.”

“Over and over he keeps making these mistakes. And that’s not how you are going to beat Lewis Hamilton to a world championship.” warned the man who did beat his former Mercedes teammate in 2016.

Damon Hill, 1996 F1 World Champion and twice a winner at Monza, gave his view:”Ferrari have got a problem and it is called Lewis Hamilton. That is why he is worth every penny. Sebastian Vettel cracked under pressure, it has to be said.”

Jacques Villeneuve, 1997 F1 World Champion, told Sky Italia: “It is 100% the Ferrari driver’s fault. It was a magnu=ificent overtake by Lewis, I don’t know what Sebastian did. In the end, his mistake handed victory to the Mercedes. It was a big mistake, which has not helped the championship battle.”

Former F1 driver turned pundit Martin Brundle: “It was a 50-50 racing incident but the key moment of the race. I think Ferrari blew it in qualy because they should have slipstreamed Vettel on to pole. I can’t help but feel they are throwing it away.”

Autosprint led the Italian media criticism of the Scuderia’s star driver: “At the Variante della Roggia there was the masterpiece by Hamilton and the spin by Vettel. It was a perfect, millimetre precise attack on the outside by Hamilton. One can think about the moves that Vettel could have made, take a different position on the track into Turn 1, protecting the racing line instead of trying to go on the inside of Raikkonen. A first lap to forget by Vettel.”

Gazzetta dello Sport: “Vettel has to chew another bitter pill after finishing in fourth place at Monza. From red to grey: it should have been a red party, the Tifosi at Monza expected more given the superiority of the Ferraris. Instead, in the end, they had to watch Lewis Hamilton celebrate on the top step of the podium.”

24 Ore led with the headline: “Vettel mistake paves the way for Hamilton” and added in their report, “Vettel will not sleep soundly before the next seven races. One cannot help but think he is wasting too many opportunities considering that none of his predecessors have had such a competitive Ferrari to race since 2007.”

This is not the first time that Vettel has disappointed with his waywardness, he copped a great deal of flak when he crashed out while leading his home German Grand Prix, gifting victory to Hamilton.

The latest mistake simply adds to a catalogue of errors committed by himself and his team during this campaign, their reality is that despite having the best car on the grid, in the SF71H, their star driver is not delivering when it matters while his title rival maximises the unexpected opportunities handed to him.

Vettel arrived in Italy trailing Hamilton by 17 points in the championship standings, on Sunday evening the lead was up to 30 points with seven rounds remaining.