Alonso: How can you miss a braking point by that much? 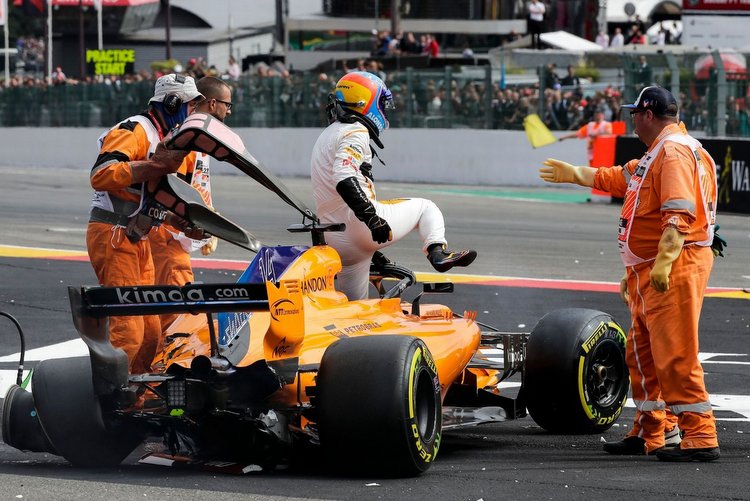 Fernando Alonso was relieved that he, Nico Hulkenberg and Charles Leclerc after the trio walked away from a massive crash at the start of the Belgian Grand Prix, the McLaren driver questioning how his Renault rival could make such a massive mistake.

Alonso was reduced to a passenger once Hulkenberg’s Renault rammed the McLaren as they screamed into the Turn 1 Hairpin and sent the orange car flying over the top (and halo) Charles Leclerc’s Sauber. Within seconds three very expensive wrecks steamed on the Spa-Francorchamps asphalt because of a moment of brain fade.

The Spaniard reflected on a very short race for him, “It was bad on the start. I saw Hulkenberg in the mirrors with all four tyres locked and he was coming at very high speed. There is no way you can avoid that. He hit my car and then I went over Charles.”

“Yet again a very big-time missed braking point. Last time Romain (2012 at Spa) had a race ban. This time we’ll see. It’s hard to understand how you can miss a braking point by that much. You arrive at a speed where it’s impossible to negotiate the corner.”

“On the positive side we are all ok, with Charles, with the Halo or whatever, it’s good news that all three of us are ok.”

“It’s a good proof [for the halo]. We didn’t need any proof, but it’s a good thing. Something similar to 2012 at the start. When you miss so much the braking point and hit someone at that speed you need to think a little bit twice next time.”

Asked if he will look back in regret at what is his last F1 race at Spa-Francorchamps, where he has never won a grand prix, Alonso replied, “Right now, no. Maybe in a couple of days, yes.”

“But right now it’s more about how you can get so wrong one start and you don’t brake for turn one. That’s a big mistake,” repeated Alonso who at the 2012 edition of the race in Belgium was also an innocent victim of an eerily similar incident triggered by Romain Grosjean at the time.