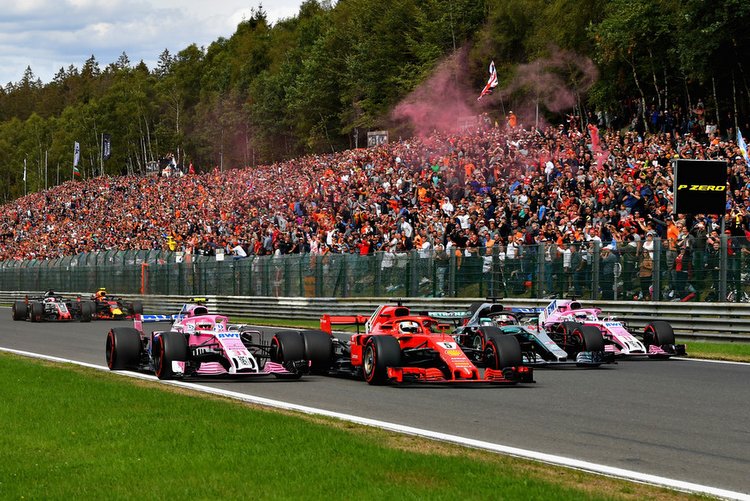 Sebastian Vettel and Ferrari found the sweet spot around Spa-Francorchamps to claim victory at the Belgian Grand Prix on a sunny afternoon after dominating the race which was marred by a first-lap collision that in the end eliminated five drivers.

From pole position, Lewis Hamilton made a strong start as did Vettel who tucked his Ferrari under the rear wing of his Mercedes. The pair powered up the Kemmel straight towards Les Combes, side-by-side down the middle of the tarmac, on either side two Force India drivers with ambitions!

Vettel stayed ahead on the inside got the position from Hamilton who tucked in behind his title rival, with the two pink cars of Sergio Perez and Esteban Ocon chasing.

As the field powered off the start line into the tight Turn 1 hairpin Hulkenberg messed up on the brakes, the Renault locked up. slammed the McLaren which was launched by the impact and flew over the Sauber of Leclerc, scraping over the halo in the process, causing extensive damage.

All three drivers climbed out of their wrecks unaided and a safety car period was initiated to recover the cars and clear the debris. Their race day was over.

Raikkonen suffered a puncture as well as damage in the incident and was forced to limp back to the pits where the Ferrari repaired the car and sent him out, but by the eighth lap they retired him.

In the Red Bull, Ricciardo also suffered damage which compromised his race and led to him pulling out of the race 20 laps later.

After the safety car period, Vettel kept control of the race, when Hamilton showed the hint of attack the German would respond. In the end, the contest for the lead petered-out as Hamilton clearly held station before the race hit the 40-lap mark.

On the day Ferrari was too good, their package showing an edge over what Mercedes drivers – Hamilton in particular – had at their disposal in race pace on the day.

Vettel said immediately after his fifth win of the season, “I had a great start, Lewis pushed me quite far to the left, but l knew l would have my chance at the top of the hill.

“Timing is crucial and l managed that perfectly, l thought. I had a good restart after the Safety Car and after that it was a very smooth race. It was a great weekend,” he added.

Hamilton kept Vettel in sight, hovering between three and four seconds behind the Ferrari. Mercedes tried the undercut but it did not work. When Vettel emerged ahead after his final stop in the run down to Eau Rouge, Hamilton was in his mirrors.

The leader toiled hard to extend the gap as it became clear that Mercedes did not have any more powder in their keg to mount a serious final attack. Although Hamilton still enjoys a 14 point lead over Vettel, the pendulum is swinging back towards the Reds.

Hamilton said of his afternoon, “We came here with a pretty good upgrade and, generally every time we do, they bring a bigger one. We knew they were quicker on the straights, particularly in qualifying in the last sector.

“We’ve known for the last four races that they’ve had some things on their car that’s enabled them to be quicker on the straights and we just need to work harder I guess. He was doing times I wasn’t able to do. It got to a point where it was just sensible to save the engine,” added the World Champion.

Max Verstappen enjoyed an incident-free albeit lonely run to third place for Red Bull, delighting the huge Orange Army that followed him to the Ardennes. Last year he only lasted seven laps…

But the Dutchman acknowledged he had little to sweat about during the 44-lap race, “It was a little boring, especially after the first 10-12 laps. Initially, it was a bit chaotic but we stayed out of trouble and did our own thing and got on the podium.”

“Before in Spa we have been unlucky, and it happens sometimes but I’m very happy with today,” added Verstappen.

Valtteri Bottas did the most overtaking in an otherwise, barring the first lap melee, a mundane albeit tense race. The Mercedes driver started 17th thanks to engine penalties, from there he made the most of his superior package to scythe his way through the field – his Silver Arrow in another class – to claim a well deserved fourth place and the fastest lap of the race.

A new era began at Force India on the eve of the Belgian Grand Prix weekend and they trumpeted it in with one of their finest weekends in memory, Sergio Perez and Esteban Ocon making the occasion memorable by to claiming fourth and fifth respectively after starting from an all pink second row for the first time ever.

After losing all Force India scored points, the Racing Point owned outfit scored points in their “debut” and despite starting the day with zero points have already leapfrogged Sauber and Willaims in the standings.

The Haas boys kept out of the wars and brought home a valuable haul of points with Romain Grosjean in seventh and Kevin Magnussen eighth.

The final point went to Marcus Ericsson and Sauber, making up for the disappointment of losing a car early on in proceedings.

Final word to Ferrari team chief Maurizio Arrivabene, on a fine victory for his team at a most opportune time, “Today finally it was not cloudy so we were in the situation to express our potential.” It is a pity for Kimi, it was our mistake yesterday, when we make a mistake it is my mistake first.

“Today, we demonstrated that our car is stronger. It is a superclass driver and good to have racing like this. I’m looking forward to Monza and we will see,” added the Maranello boss with reference to next Sunday’s Italian Grand Prix on home turf for the Reds. 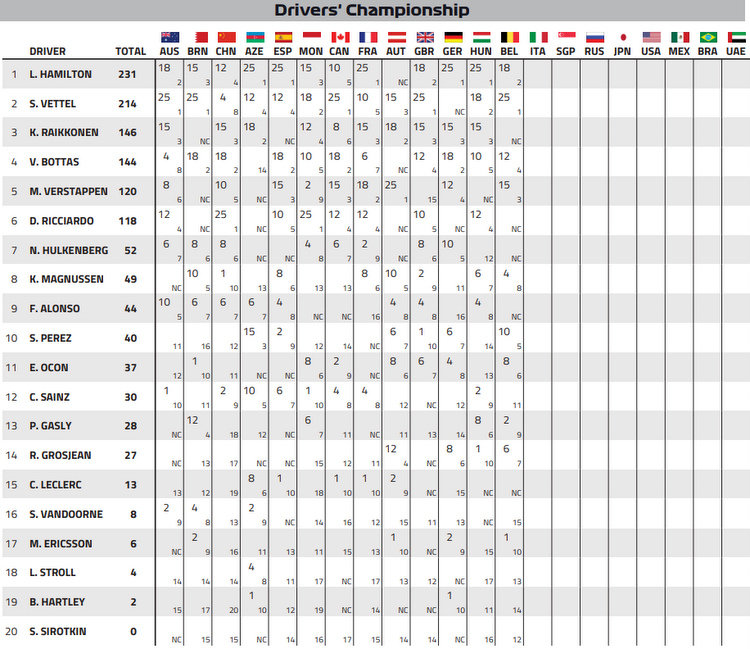 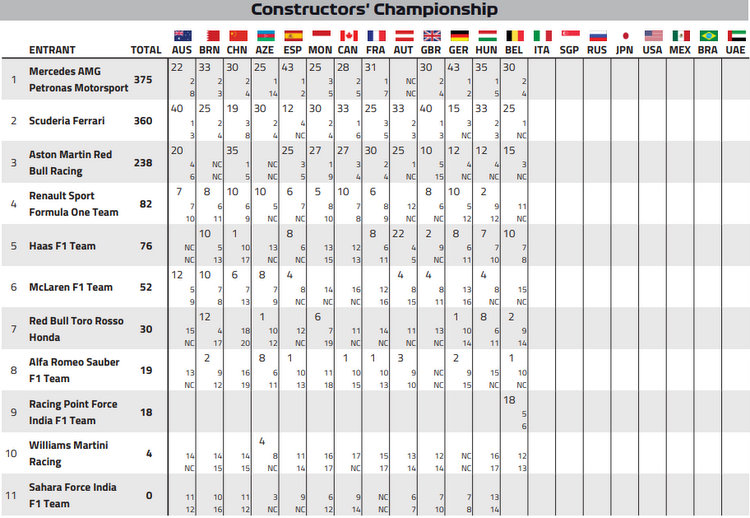