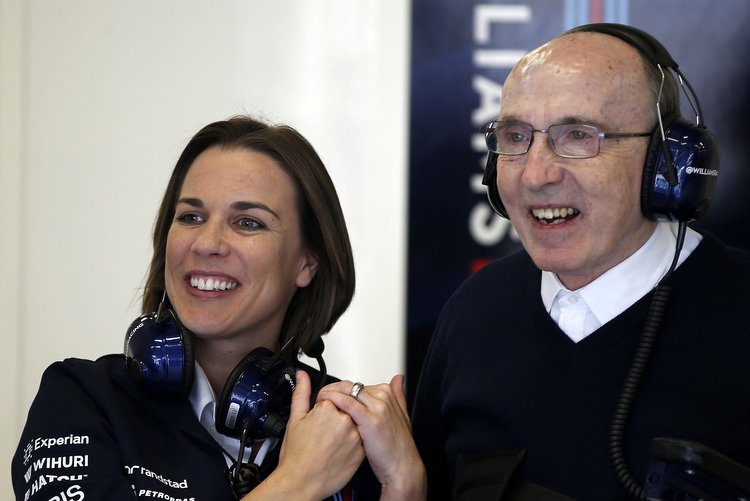 The once mighty Williams team has this season reached the lowest ebb of its illustrious history, long gone are victories and titles that made it one of the most feared teams on the grid, reduced to the wretched state it now is: the worst team on the grid.

Jacques Villeneuve, who won Williams’ last drivers’ title in 1997, kicked the hornet’s nest last week when he roundly slammed bad management at the Grove outfit and squarely put the blame on 41-year old Claire’s shoulders. The straight-talking Canadian added that promoting her to lead the team, triggered by Sir Frank Williams’ deteriorating health, was a bad call.

Statistics show that since Claire’s appointment as deputy team principal in March 2013, running the show in lieu of her father, the team has suffered a steady decline despite occasional flashes of hope such as in 2014 and 2015 when they finished third in the constructors’ championship.

Last year they dropped to fifth in the standings and this year they are stone last with little chance their drivers, 19-year-old Lance Stroll and rookie Sergey Sirotkin, will score points this season as the FW41 is not only slow but also unpredictable, difficult to drive and perhaps even dangerous as Claire hinted.

The appointment of Paddy Lowe to technical chief last year was supposed to kick-start the renaissance, but the former Mercedes man and the crew he assembled produced a colossal flop of a car.

Lowe has pointed to hitherto unseen were phenomenon stumping the team, while Williams herself is on record saying her drivers “keep putting their helmets on and getting into that car which is pretty evil” and adding “I wouldn’t want to get into it.”

In an in-depth interview with the New York Times, Claire described the anguish of these challenging times and admitted, “We never saw it coming. Clearly, it’s been a big shock. It’s like experiencing grief.”

“It is my team, it’s very personal to me, and I’ve always said the team is like another sibling. I care for it deeply, and all I do is try and nurture it. At the moment, my team is in the wars, and I take that personally.”

“As much as I have my dreams of winning races again, of trying to fight with Mercedes, Ferrari and Red Bull again, I’ve tempered those dreams.”

Although it’s the same for their rivals, Williams felt the brunt of Formula 1’s tripleheader weekend perhaps more than the others, as their car has a bucketful of unsolved problems, every weekend a slog for their drivers and crew in general for scant reward on track.

With regards to the three trying back-to-back grand prix weekends, Williams said, “At the moment everything that comes feels like a body blow, particularly when we’re at the end of a tripleheader and you know the next race is going to be as bad as the previous one. But you’ve got to keep the faith and keep working through it.”

For the lemon that the team produced, the once highly rated (former Ferrari aero man) Dirk De Beer was the high-level fall guy who was sent packing and it seems more heads could roll, according to paddock whispers even Lowe might not be immune to the chop.

Claire conceded that the winds of change may continue to blow through the offices at Grove, “You are constantly looking at the team you have to ensure it operates as effectively and efficiently as it can, and that does sometimes involve some difficult decisions.”

Along with McLaren, Williams are the last of the ‘garagistes’ that made up the backbone of Formula 1’s commercial era which dawned in the late seventies, took off in the eighties and boomed in the nineties.

Under the controversial but shrewd leadership of Bernie Ecclestone, mechanics and wheeler-dealers turned Formula 1 team bosses became multi-millionaires overnight, wealthier than they ever were in their wildest dreams.

Sir Frank was one that profited greatly from the Ecclestone-led boom of that period, partnered by the legendary Patrick Head they produced the best-engineered cars on the grid and by the late seventies they established themselves as a Formula 1 superpower where they remained for decades.

Relentless success was the reward which saw them rack up nine constructors F1 world titles, second only to Ferrari. At the same time, seven different drivers won seven F1 championship titles with the team.

The last time Williams won in Formula 1 was with Pastor Maldonado at the 2012 Spanish Grand Prix, it was their 114th triumph at the pinnacle of the sport.

A year later, when Claire was made deputy team principal she had very big shoes to fill, “You never want to let your parents down. When you’re younger you don’t really care that much, but when you’re older you really want them to be proud of you. Dad has really put his trust in me. I’m always worried he is going to tell me to go home, but he doesn’t.”

“I’m not starting a team from scratch. I’ve inherited a team that’s 40 years old, and with that comes issues within itself, so dad is there, and he is a huge tower of strength for me. Seeing him reminds me why I’m doing it, that I’m doing it for him and the family at the end of the day.”

Claire, who gave birth to a boy late last year, went on to reveal, “I’ve given 16 years to the team, I’ve really given my all. I’ve put a lot of things on hold and made a lot of personal sacrifices.”

“That’s not through obligation, but because I wanted to, so this year was supposed to be my time and to enjoy my little boy and husband, and I haven’t been able to do that.”

In retrospect the team shot itself in the foot before the start of this season when they opted for two inexperienced pay drivers, the pair bringing anything up to $40-million this season for the ‘privilege’ of driving the cars.

Sirotkin has been solid for a rookie, however, he simply does not have the tools to do anything but try to keep the beast of a car on the road.

Stroll is pulsing frustration after a neat rookie season last year alongside veteran Felipe Massa. This year with the least cool toy on the grid the billionaire-teenager is way out at sea, lost, sulking and lacking confidence in the kit provided by the team which has banked Lawrence Stroll signed cheques for substantial amounts over the past two years.

Nevertheless, Claire advised her drivers, “All you can do is enjoy that challenge, to do more than a rookie driver is required to do. Once we get over the problems and get the results as a team, then we will be more proud of what we will have achieved, and it will be very much deserved.”

“Formula 1 is an amazing sport, but it’s a cutthroat sport, a difficult sport, and it’s made me realize what an extraordinary job Toto Wolff and Christian Horner do to achieve what they have managed to achieve, and I haven’t achieved it yet.”

“I’m going to give it a damn good go, but then winning isn’t easy. It takes a huge amount from within you to be successful, and at the moment I’m testing myself to see whether I have that within me,” insisted Claire.

Right now, Claire’s management skills are being severely tested but perhaps the two big questions keeping her awake at night are, one: whether Lowe is the man for the job, or two: maybe it is time for her to step aside and allow her marginalised brother Jonathan Williams take over the reigns of Daddy’s business. Watch this space!

Big Question: Is it time For Paddy to go? Time for Claire to Go? Both must go?