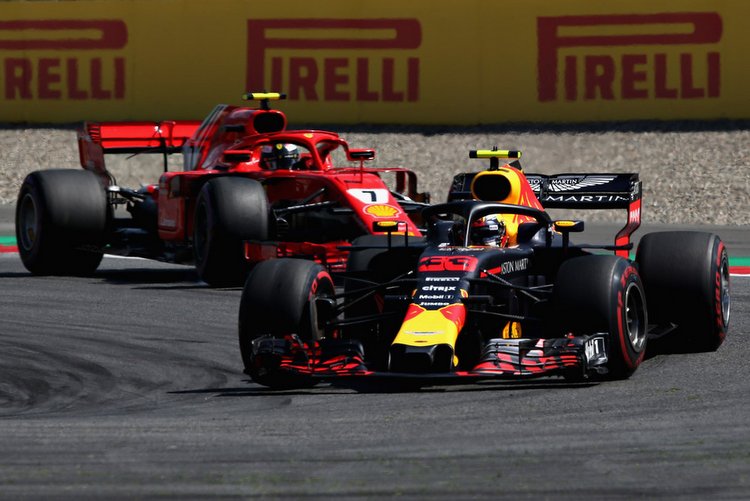 Max Verstappen became the first Red Bull driver to ever win the team’s home race in a textbook drive to win the Austrian Grand Prix at the Red Bull Ring on a miserable day for Mercedes whose two drivers retired with power unit-related issues.

Verstappen drove a well calculated, calm and mature drive to claim his fourth career victory, his first of the season and one that has salvaged his campaign. He also broke Mercedes’ stranglehold at a venue bought, developed and nurtured by Red Bull big boss Dietrich Mateschitz.

The Bulls were also superb in the servicing the winner, the rapid double-stack pitstop of their drivers was critical at the point in the race.

Verstappen told MC Mark Webber afterwards, “It was amazing. It was very good to manage the tyres as well. So we really had to look after them, a lot of blistering, but we managed to hang on until the end.”

“It’s amazing to win with Red Bull at the Red Bull Ring and with so many Dutch fans around here, it’s incredible. I needed to catch up with the points. Today was a really good day for me and I just hope we can continue like this,” added the Dutchman who now lies fifth in the championship.

Ferrari made the most of the downfall of Mercedes with Kimi Raikkonen claiming second place and Sebastian Vettel recovering from a grid penalty to turn sixth into third by the end of the race, and with it take the lead in the championship by a single point.

Raikkonen made a great start, the meat in the silver sandwich as the field roared into turn one, “I had to back off a little bit because they were going to squeeze together, my decision was already gone there. I was scared I was going to be hit.

“But after that we ran wide and lost places. The car came very good but we ran out of laps. I think we too it [too] easily too long. It’s a shame but we had a great car today in the end. It was a good result from the team,” added the veteran Finn.

Vettel was was magnanimous in defeat, “I told him [Max]: very good race, very consistent, no mistakes. We were chasing him down at the end but couldn’t quite make it. Obviously it would have been nice to start further up. I tried to get some back in turn one but didn’t quite work.”

“I was left with no place to go and lost the momentum and then it was the same thing in Turn Three. So I had to fight with the Renaults and the Haas at the beginning at the race. Then a bit of a slow pit stop. So it was pretty much damage limitation. The tyre management was very good, so positive day. Could have been better, but a well-deserved win for Max,” added the Ferrari driver.

Not since the 1955 Italian Grand Prix have Mercedes suffered a double DNF due to mechanical reasons and it would be fair to say that the Silver Arrows lost a race that was theirs to win with Valtteri Bottas starting from pole and teammate Hamilton beside him.

But Bottas messed up his start, which allowed Hamilton to lead early on, but they failed to pit #44 for fresh rubber during a VSC period while their rivals did and this cost them.

In retrospect, this was the beginning of their undoing and indeed James Vowles, the team’s chief strategist, admitted over the radio: “Lewis, it’s James. I’ve thrown away the win today but you have the potential opportunity to get back up. Just let the tyres cool, we trust in you and believe in you.”

Hamilton had to pit again and dropped down the order whereby he was told to max it out and attack. Soon after the Mercedes coasted to a halt at the side of the track as Bottas had done earlier in the race. A very rare double DNF for the Silver Arrows.

Haas enjoyed their finest day in Formula 1 with Romain Grosjean and Kevin Magnussen finishing fourth and fifth respectively, the pair finally delivering on the promise of the VF18. A great 50th grand prix milestone for the youngest team on the grid.

Next up were the Force India duo, the Silverstone team finding good race form at Spielberg, with Esteban Ocon sixth and Sergio Perez seventh.

McLaren’s Fernando Alonso turned a pitlane start into eighth after another gusty performance in what may well be the worst chassis on the grid. His teammate Stoffel Vandoorne suffered early damage to his front wing, he toiled on to finish 15th and last of the cars running at the end.

It was a race of attrition as high track temperatures played havoc with strategy and tyres, with blistering a common. albeit random, problem across the field.

Others to park before the chequered flag included Nico Hulkenberg whose Renault engine went up in a huge puff of smoke along the main straight and Daniel Ricciardo also forced to stop with a steaming power unit with Verstappen in his sights. A one-two was a distinct possibility when the Renault badged TAG-Heuer stopped ticking.

When the light went out for the start, Räikkönen made a superb getaway and slotted between the two slower Mercedes of Hamilton and Bottas.

The inside line belonged to Hamilton, however, and he emerged in the lead with Räikkönen second ahead of Bottas.

The Ferrari driver then tried to attack Hamilton around the outside of Turn 3 but he went wide and that allowed Bottas to retake second place, and Verstappen then slotted into third as Räikkönen struggled for pain after his off.

Behind them Ricciardo, who was celebrating his 29th birthday, had passed Haas’ Romain Grosjean to take fifth place behind Räikkönen and Vettel was also soon past the Frenchman to sit sixth.

Hamilton quickly began to pull away from the field, and by lap 10 he had a two-second cushion over Bottas, with the Finn a further two seconds clear of Verstappen.

The Dutchman was given a boost, however, when midway through lap 14, Bottas slowed dramatically on the run down to Turn 4 and pulled off track with a gearbox failure.

With a Virtual Safety Car called as Bottas’ car was recovered Red Bull chose to seize the initiative and pitted both Verstappen and Ricciardo at the end of lap 16.

Ferrari chose the same tactic, with the result that when the quartet rejoined the action the order remained static, with second-placed Verstappen ahead of Räikkönen and with fourth-placed Ricciardo ahead of Vettel. Hamilton, who has stayed out on track, now led Verstappen by 13 seconds.

On lap 20, after harrying the Ferrari driver since the start, Ricciardo finally found a way past Räikkönen. The Finn made a mistake, locking up into Turn 3, and after running wide Ricciardo tucked in behind the Ferrari and with greater pace powered past into Turn 4 to steal third place.

Shortly afterwards, Hamilton was told that his team had missed the VSC opportunity and that he needed to find eight seconds on track to avoid losing out when he made his pit stop. The incredulous Briton responded that he had no time left in his starting supersofts and so on lap 26 the pitted for soft tyres. When he resumed he’d dropped to fourth place and Max Verstappen now led a Red Bull one-two ahead of Räikkönen.

However, as the race hit half distance, Räikkönen radioed his team to say he could a large blister on Ricciardo’s rear left tyre and the problem was soon confirmed by Ricciardo, whose pace began to flag. By lap 37 he was 6.2 seconds behind his race-leading team-mate and Räikkönen and Hamilton were smelling blood.

Räikkönen was the first to pounce, and on lap 39 he closed hard on Ricciardo on the run to Turn 3. He tucked in behind the Red Bull and breezed past on the straight to Turn 4.

Behind him, it was Vettel who made the next move and on the following lap, as Ricciardo pitted to shed his damaged soft tyres, Vettel launched an attack on Hamilton.

The German dived down the inside of the championship leader as they powered through Turn 2 and hugging the edge of the track he held firm in Turn 3 to steal third place.

Verstappen now led Räikkönen by seven seconds, with Vettel a further 2.4s behind. Hamilton was now third, 0.8s behind the German with Ricciardo, on fresh supersoft tyres, 19 seconds behind.

It now became a race of tyre management. At two-thirds distance Hamilton reported that he was suffering from the problem as Ricciardo, a seriously degrading rear left tyre and on lap 52 he told his team he did not feel the rubbers would last to the end of the race. He pitted and took on supersoft tyres.

When Hamilton rejoined he found himself behind Ricciardo, but any hopes the Red Bull driver had of holding fourth place until the end evaporated on lap 53. Entering Turn 10 a puff of smoke burst from the rear of Ricciardo’s car and by Turn 1 he was on the radio saying he’d lost gear sync. He pulled over at Turn 1 and retired from the race.

With 10 laps remaining Verstappen led Räikkönen by 3.7s with Vettel a further 2.4s back in third. Hamilton was fourth, 21.7s behind the German, while Grosjean and  Magnussen held fifth and sixth places respectively. Perez was seventh ahead of teammate  Ocon and Gasly. The final points position was occupied by Leclerc.

There were more twists to come, however, and on lap 64 Hamilton suddenly slowed dramatically. “I’ve lost power,” he said simply before being told to stop his car at Turn 4. Hamilton’s exit made it Mercedes’ first double DNF since the 2016 Spanish Grand Prix.

With five laps left Verstappen was just 2.8s ahead of Räikkönen and the Finn was behind told to he was free to push as hard as he liked. Verstappen, though, had managed the race perfectly and he crossed the line to take his fourth career win and his first since Mexico last year with 1.5s in hand over the Finn.

Vettel held third ahead Grosjean, with Magnussen fifth on a good day for Haas. Ocon took sixth ahead of team-mate Perez, while Alonso enjoyed a good afternoon, making the most of a late-race charge to claim eighth place ahead of Leclerc and Ericsson. 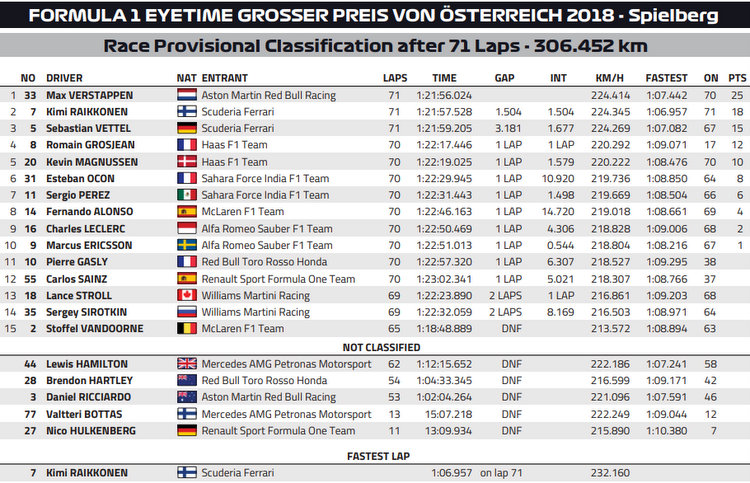