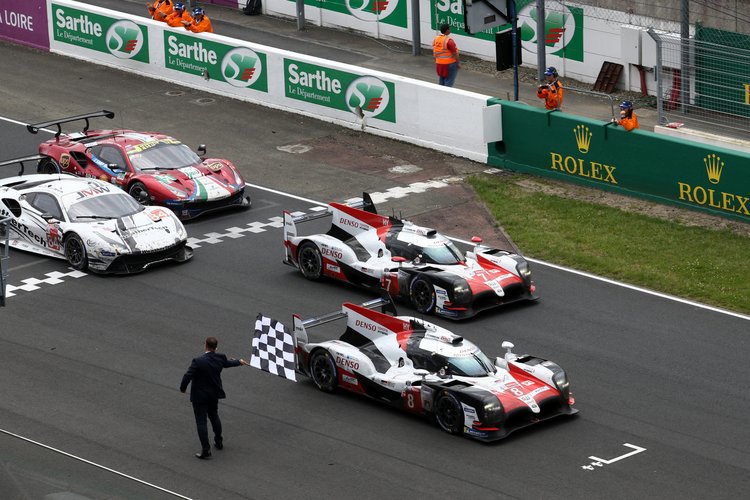 Toyota have finally claimed the trophy they wanted most when they powered to a historic one-two victory at the 86th running of the Le Mans 24 Hours sharing the Toyota Gazoo Racing TS050-Hybrid with Fernando Alonso, Kazuki Nakajima and Sebastien Buemi sharing cockpit duties.

Victory at the legendary Sarthe circuit took twenty years to come and in the aftermath of a heart-breaking last-lap loss last year.

It also takes McLaren F1 driver Alonso to one win – the Indy 500 – away from the Triple Crown of Motorsport, an accolade that only Graham Hill achieved five decades ago – namely, winning the Le Mans 24 Hours, the Monaco Grand Prix and the Indianapolis 500 during the span of a career.

After Nakajima put the #8 car on pole, Alonso played a big role in the team’s victory with an impressive night stint, as did ex-F1 driver Buemi who refused to play second fiddle to the #7 sister car when told to hold station.

In the end, they did enough to win the world’s most famous endurance by a minute over their teammates and end Toyota’s long quest to Le Mans.

The triumph, expected after champions Porsche withdrew last year, came at the 20th attempt for Toyota who became only the second Japanese manufacturer to win Le Mans since Mazda in 1991.

“Le Mans once a year is not enough! It needs to be every three weeks,” joked Alonso, who looked to be in trouble when Buemi was penalized for speeding in a caution zone late Saturday.

Alonso’s car was left more than two minutes behind the other Toyota but the Spaniard managed to claw back the difference through the night, putting Nakajima in position to retake the lead from Kobayashi early on Sunday.

“I felt great tonight,” Alonso said after his night stint driving. “I don’t know exactly how, but I managed to make the tires work for us at the right time despite the cool air temp. Our pace has been good and I was lucky with the traffic as well.”

G-Drive Racing took a dominant victory in the hands of ex-Toro Rosso driver Jean-Eric Vergne, Roman Rusinov and Andrea Pizzitola in LMP2 ahead of the Signatech Alpine Matmut Alpine A470.

In LMGTE Porsche reigned supreme with a 1-2 finish for the Porsche GT Team in LMGTE Pro and victory in LMGTE Am as well.  Michael Christensen, Kevin Estre and Laurens Vanthoor climb the top step ahead of their teammates.

Christian Ried crossed the finish line in the #77 Dempsey Proton Racing Porsche 911 RSR he shared with Matt Campbell and Julien Andlauer ahead of the Spirit of Race Ferrari.

It looked like the race between the two Toyotas was going to be closer but two ten second stop and go penalties, the first for exceeding the maximum number of laps per stint and the second for exceeding the fuel/quantity limit.

The #7 Toyota also slowed in the penultimate hour, the car travelling back to the pits slowly. Suddenly the car was back up to speed but Kobayashi still headed to the pits for the car to be checked.

Kazuki Nakajima crossed the line and stood with Sebastien Buemi and Fernando Alonso on the top step of the podium. Mike Conway, Kamui Kobayashi and Jose Maria Lopez were second. The two Rebellion Racing R13s were third and fourth, with Thomas Laurent, Mathias Beche and Gustavo Menezes taking the final podium position one lap ahead of their teammates in the #1 R13-Gibson.

The #5 CEFC TRSM Racing was the only other finisher in the LMP1 category, with five retirements including the #11 SMP Racing BR01-AER of Jenson Button in the final hour of the race.

Porsche converted their early domination of the race to take a 1-2 in the LMGTE Pro category. The #92 Porsche 911 RSR of Michael Christensen, Kevin Estre and Laurens Vanthoor finished the race after completing 344 laps, one more than their teammates Richard Lietz, Gimmi Bruni and Fred Makowiecki in the #91 911. This win was Porsches 106th class victory at Le Mans, which added to the 770th-anniversary celebrations this week at Le Mans.

Ford finished 3rd and 4th with the #68 Ford GT finishing ahead of the #67 WEC entered car of Andy Priaulx, Harry Tincknell an Tony Kanaan, who all finished just one lap behind the winning car.

The LMP2 category was dominated by one car, the #26 G-Drive Racing Oreca 07-Gibson of Roman Rusinov, Andrea Pizzitola and Jean-Eric Vergne. The team had travelled to Le Mans on the back of two wins at Spa-Francorchamps and Monza and a third and greatest track in endurance racing gave them three in a row.

The G-Drive Racing crew finished two laps ahead of their nearest rivals, the #36 Signatech Alpine Matmut Alpine A470-Gibson of Nico Lapierre, Pierre Thiriet and Andre Negrao, with another lap on the third placed car of Vincent Capillaire, Jonathan Hirschi and Tristan Gommendy in the #39 Graff-SO24 Oreca-Gibson.

There were even more celebrations for Porsche as the #77 Dempsey-Proton Racing Porsche 911 RSR driven by Matt Cambell, Christian Ried and Julien Andlauer secured the victory in the LMGTE Am class, 1minute 39 seconds ahead of the #54 Spirit of Race Ferrari of Thomas Flohr, Francesco Castellachi and Giancarlo Fisichella. The victory for the Dempsey Proton Porsche secured the German manufacturer their 107th class victory at Le Mans.

The 2018 24 Hours of Le Mans was the second round of the 2018/19 FIA World Endurance Championship. CLICK HERE for the result from the race after 24 hours.

Porsche continue to dominate LMGTE, with the #92 Porsche over a lap ahead of the #91 911 RSR as the clock went past the 18 hour point. The #68 Ford GT of Dirk Muller was lying in third position, 31 seconds behind the second placed Porsche.

The #26 G-Drive Racing Oreca continued to lead the LMP2 class with Roman Rusinov still in the car at the top of the hour. The Russian team is over a lap ahead of the second placed car, the #23 Panis Barthez Competition Ligier, with the #36 Signatech Alpine A470 a further lap behind in third.

The #77 Dempsey-Proton Racing Porsche of Christian Ried is also still out in front of the class, over a lap ahead of the #54 Spirit of Race Ferrari F488 of Giancarlo Fisichella

There were plenty of incidents in the third quarter of the 86th edition of the 24 Hours of Le Mans. Both Toyotas had to serve stop and go penalties for speeding under slow zone regulations.

There were several cars that went off track during the night with some retirements. The #47 Cetilar Villorba Corse Dallara went of into the gravel at Indianapolis and had to be recovered, the Italian team able to return to the track.

The #82 BMW wasn’t so lucky, with Alexander Sims going off into the wall at Porsche Curves. The heavy damage forced the retirement of the car. The #84 JMW Motorsport Ferrari also went off at Porsche and there were reports of oil on track.

The #88 Dempsey-Proton Competition was another retirement from the LMGTE Am class after hitting the barriers, with the #10 Dragonspeed BR01 of Ben Hanley also going off at Porsche Curves a few minutes later.

The #52 AF Corse Ferrari had to serve a drive through penalty for speeding in the pitlane. 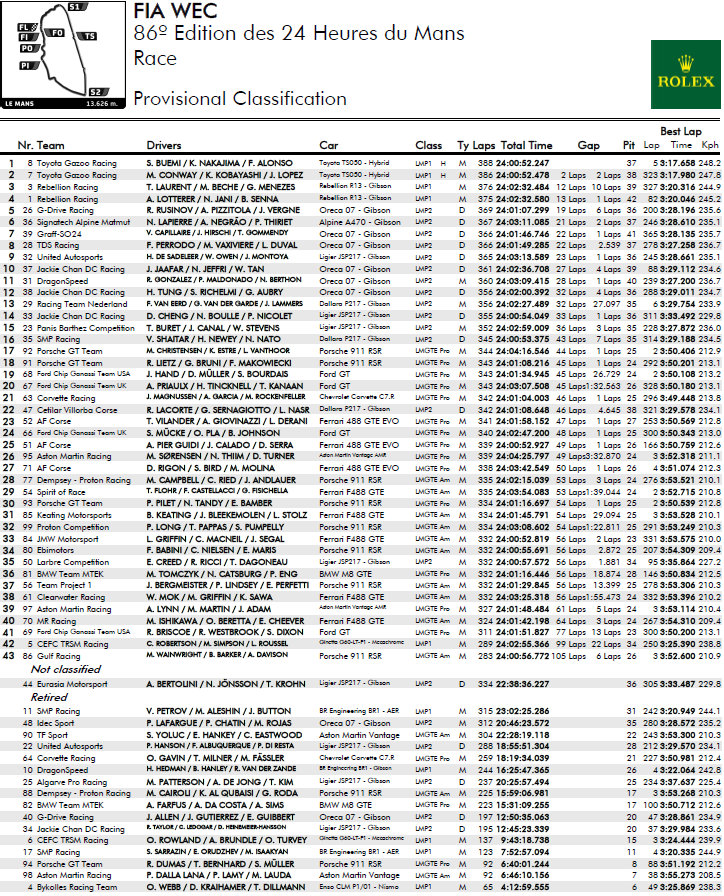