Alonso: I’ve got into the rhythm of the night 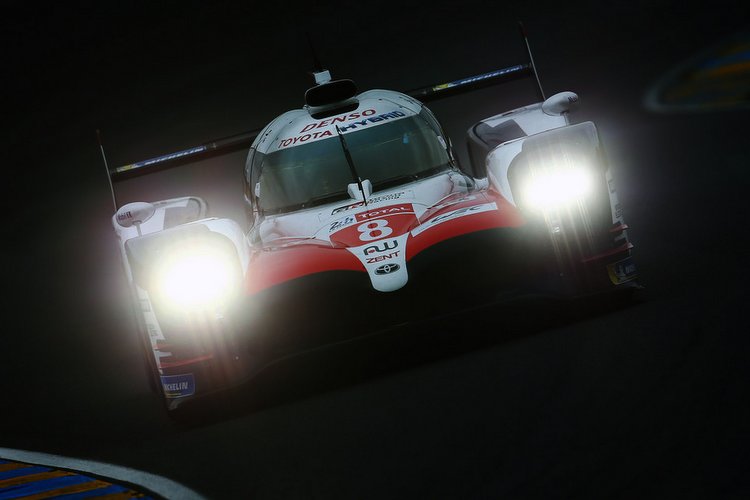 Fernando Alonso’s hopes of winning the Le Mans 24 Hours race at the first attempt were on the rise on Sunday after his #8 Toyota regained the lead from the Japanese manufacturer’s #7 car.

The Spaniard put in a remarkable stint during the night to reduce a two-minute deficit after a stop-go penalty and teammates Sebastien Buemi and Kazuki Nakajima then did their bit to take back control.

“Tell me if you want another stint, eh? I’ve got into the rhythm of the night,” Alonso had said over the team radio as he closed the gap.

Instead, he handed over to Nakajima, who then passed fellow-Japanese Kamui Kobayashi for the lead.

With seven hours remaining and both cars handed further stop-go penalties for speeding in slow zones, Buemi was 46 seconds down the road from Britain’s Mike Conway in the other TS050 hybrid.

The turnaround also fuelled conspiracy theories that Toyota wanted Alonso to win for the extra publicity value, although the manufacturer has denied any favouritism.

The double Formula 1 world champion and Monaco Grand Prix winner, has made a big play about becoming only the second driver to take the ‘Triple Crown of Motorsport’ and Le Mans is the second piece of the puzzle.

The McLaren driver still has to win the Indianapolis 500, a race he led last year before an engine failure, to match the late Graham Hill’s achievement.

Ironically, a Le Mans victory could hasten the 36-year-old’s departure from Formula 1.

Alonso’s chances of Le Mans success had appeared to fade with 14 hours to go when the eight Toyota dropped two minutes behind when Buemi collected a stop-go just after midnight.

Toyota are the only major manufacturer competing in the top LMP1 class after champions Porsche quit the World Endurance Championship last year, and have only themselves to beat.

Drivers change 🔄 @alo_oficial inside for his first @24hoursoflemans night stint!