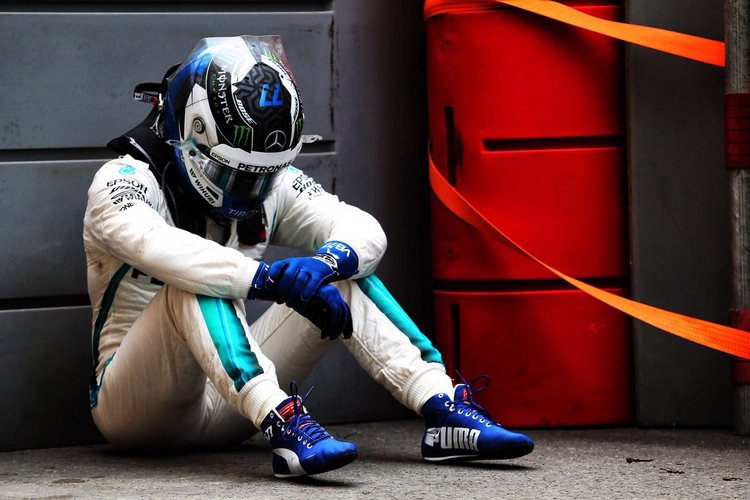 It was a bittersweet afternoon for Mercedes, while Lewis Hamilton ‘celebrated’ victory at the Azerbaijan Grand Prix, the team had to console Valtteri Bottas who did all the hard work on the day only to have the win snatched from him when his rear tyre exploded because of debris while he led in the frenetic closing stages.

Bottas admitted to the heartache and the images of dejection of him after the race are gut wrenching, while bewildered Mercedes team chief Toto Wolff slammed Liberty Media as he suggested the safety car was deployed to spice up the spectacle.

Wolff told reporters after the race, “It’s just brutal what happened to Valtteri. I guess … that’s how motor racing should be. But going through the rollercoaster of emotions of a solid result, but not a win. Then Lewis’ race was damaged, virtually damaged, by the flat spot.”

“Then Valtteri kept going faster, and faster, and faster. To the point that, even with no Safety Car, we thought that there was a chance. Because he could leave on the ultrasoft and would’ve been able to try to hunt Sebastian down but obviously it all…”

“You can see that all around, the most complicated is the tire warm-up. Because the Ferraris were in the window immediately. Sebastian was, on the first lap, two seconds faster than everyone else and then we were fine, with the tires coming in. But the Red Bulls struggled a lot.”

“Then once it stabilized the pace was OK but I actually think that Sebastian managed the front. In those early stages he was the fastest car on track. But that changed, because Valtteri’s race then came towards him and then obviously we knew that staying out would give opportunity with Safety Car, that’s what we did.”

“Then it just went up in flames to lose an easy win with three laps to go with some piece of debris on the track,” lamented Wolff.

“The Safety Car has influenced all race results,”, added Wolff before unleashing some wicked sarcasm. “I guess that’s good news for the show. Isn’t that what the Americans call it? You have to send Mr. Debris out. That neutralizes the pack and this is what caused a great spectacle with perhaps some of the results we didn’t expect.”

“But maybe one word on the debris, these things shouldn’t be on track. We had six laps behind the Safety Car, there shouldn’t be a piece of debris the size of a fist,” added Wolf.

Sometimes the sport you love can be tough. But, I’ve learned to turn negative experiences into strenght. #VB77 #F1Baku @MercedesAMGF1
📸 @XPBImages @CharniauxImages pic.twitter.com/vXaP6ylgxl