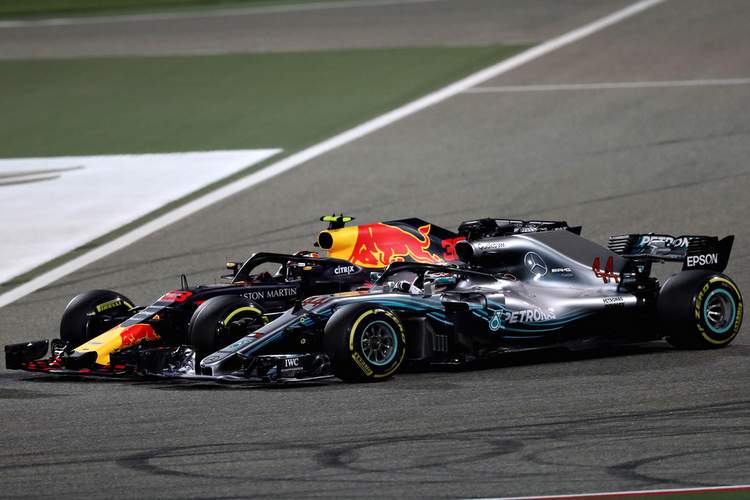 Lewis Hamilton was not happy with Max Verstappen after the pair banged wheels as the field powered into Turn 1 at Sakhir circuit on the opening lap of the Bahrain Grand Prix.

It was riveting stuff as the pair went side-by-side (as if glued) through the Turn 1 complex with Verstappen emerging out of the corner, from 15th place on the grid, ahead of Hamilton who had started from ninth.

As Verstappen ran wide exiting the corner, the Red Bull’s rear left tyre caught the front wing of the Mercedes which had run out of room. The result was an instant puncture as well as race over for the Dutchman and a close escape for Hamilton who was fortunate not to incur damage to his Mercedes. He went on to finish third.

After the race the four times F1 World Champion was not happy with what took place, “It was an unnecessary collision. There needs to be a certain respect between drivers. It didn’t feel that respectful. It was a silly manoeuvre from him because he didn’t finish the race.”

“He ran me out of road, which I felt at the time was just unnecessary. He was past. I couldn’t get by. There was no need to push by. It was frustrating because it could have been me out of the race and it ended his race and there was not much I could do to avoid him,” lamented the Mercedes driver.

Verstappen, whose race lasted half a lap, refused to take the blame, “I had a good run on to the straight and going for the inside under braking I was next to him, going in to the corner I was ahead.”

“Of course you always try to squeeze each other a bit. I think there was still enough space on the left but he drove into my left rear and gave me a puncture and also destroyed the diff,” added Verstappen.

The race stewards had a look at the circumstances and declared it to be a racing incident.

Big Question: Was Max being disrespectful?