Nightmare for Red Bull in Bahrain 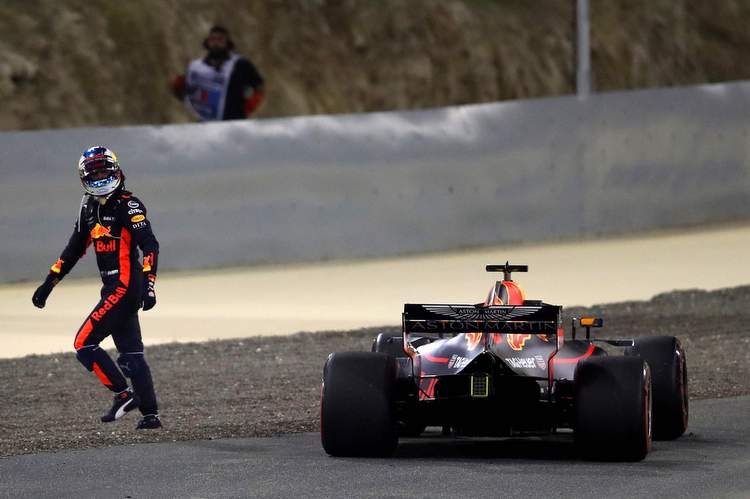 Daniel Ricciardo and Max Verstappen did not make it beyond the second lap of the Bahrain Grand Prix as the pair of Red Bulls were parked at the side of the circuit punctured and broken, both drivers heading back to the pits for a very early shower.

Verstappen tagged the front wing of Lewis Hamilton’s Mercedes in a first corner melee and suffered a puncture. As he made his way around the circuit on three wheels he reported that the car had lost power. He made it to his pit garage, but his race was run.

Ricciardo, coincidentally also had a puncture, as his car lost all power and he was forced to park up at the side of the circuit.

He said, “Coming in to turn eight I lost all power, everything switched off without warning and I couldn’t do anything. I guess it’s an electrical engine issue, maybe battery related but I don’t know exactly yet.”

Verstappen continued, “Due to the hit with Lewis we sustained some more severe damage than just the puncture, we haven’t had a chance to look at the car yet but we suspect the differential. From the start I was enjoying the feel of the car and finding the gaps and it was shaping up to be an exciting race.”

“I had a good tow on the straight, the last corner was really good so it allowed me to stay close to Lewis. We got a bit squeezed but from the middle to the end of the corner I was ahead, I then felt a nudge from behind and could feel the puncture and therefore knew the race was likely over.” added Verstappen.

Team chief Christian Horner summed up their short night: “A brutally harsh race for us today.”

After investigation, a suspected electrical engine issue put pay to Daniel’s #BahrainGP, while Max was forced to retire after sustaining too much damage from his early puncture 😔