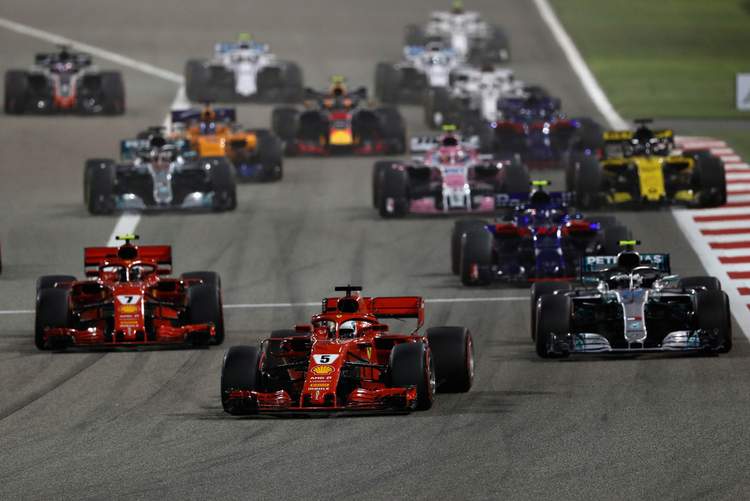 On the occasion of his 200th Formula 1 start Sebastian Vettel scored his second win in two races, powering to victory at the Bahrain Grand Prix suckering Mercedes into believing he was on a two-stop strategy but in fact going all the way to the end of the race on the yellow band Pirelli tyres that were reduced to canvas.

It was an intriguing duel under floodlights, as close as Formula 1 will ever be to chess, as Vettel controlled the race from pole position and managed to fight off a hard-charging Valtteri Bottas in the final stages of the race.

The desert venue, often a stage for some boring races, delivered an action-packed race with great story-lines across the results sheets.

Bottas looked good for the win, but an untidy attack on the final, at the first corner was ambitious and unsuccessful. He never really got another chance. After a gutsy chase, what was needed was a mighty attack instead, it was a feeble attempt and second was his reward.

Lewis Hamilton was a damage limitation mission after receiving a penalty and a below par qualifying by his standards. Nevertheless, he managed to turn ninth on the grid to third place after surviving a first lap Turn 1 skirmish with Red Bull’s Max Verstappen.

In the end, it was Vettel’s night as he really did not put a foot wrong, and his pitwall were brave with the strategy which was a marginal call, ultimately outsmarting the Silver Arrows and handing the German his 49th grand prix victory.

“When they told me the pace of Valtteri at that time I thought no way I could do that. I was doing the maths in the car and thought he was going to catch me.”

“I tried to keep it as clean as possible. Both Mercedes were strong at the end of the first stint and going onto the prime they saw what we did and I thought that was chess made as we have to come in again.”

“Then we diverted and I tried to nurse the tyres as much as I could. It worked, but just. Fortunately, Valtteri ran out of laps,” concluded the Ferrari driver.

Bottas gave his side of the story, “I knew there would be a chance that he would struggle in the end. I was trying to get every lap and corner perfect to catch him but it was just not quite enough.”

“Being second with such a close margin and having such good pace at the end is extremely disappointing. We will try to get them next time,” promised Bottas.

Hamilton was happy with his evening of damage limitation, “I’m happy. Congratulations to Sebastian and Valtteri did an exceptional job this weekend. I’m really happy, I started ninth so third is not bad at all. It’s damage limitation.”

“There were frustrating points in the race so they couldn’t hear me so I had to pick particular moments to speak to them. Communication is really difficult when you are trying to catch Sebastian who is 25 seconds ahead to know exactly what you need to do to not kill your tyres but make it so you catch him at the end. When you’re not getting that feedback it’s frustrating,” admitted Hamilton.

It turned out to be a bittersweet night for the Reds, as Kimi Raikkonen’s race ended in tears when his crew botched the pitstop, releasing him before removing his left rear tyre and as he powered out of his grid slot he knocked over one of his mechanics. He stopped the car and that was his race run.

The mechanic was treated on the pitlane before being taken to hospital with a suspected broken leg.

Vettel paid tribute to his injured teammate, “I’m a bit sad as I think in the pitstop with Kimi one of our mechanics got injured, so send him my best regards.”

At the start of the race, Red Bull would have fancied having one if not two of their drivers on the podium, but it was a shocker for them as astonishingly both Verstappen and Ricciardo were out with punctures and technical issues before half a lap was run.

Verstappen came out second best when he tucked ahead of Hamilton, but the Red Bull’s rear left tyre tagged the Mercedes’ front wing and punctured. The Dutchman drove gamely to the pits but retired the car in front of the team’s garage after reporting a loss of power. In the pit garage next door, Ricciardo suffered an electrical failure.

The series of misfortunes for the Red Bull team were in stark contrast to the superb performance by rookie Pierre Gasly in the Toro Rosso. The Frenchman shone in qualifying and in the race delivered a superb drive to claim fourth place. A big morale boost for the team and Honda.

The Toro Rosso was chased hard all day by Kevin Magnussen in the Haas, fifth place his reward for an afternoon of hard graft for the Dane who as usual took no prisoners.

Best of the Renault powered brigade was Nico Hulkenberg in sixth, the last of the cars not to be lapped by the winner.

McLaren recovered from an embarrassing qualifying session on Saturday, by bouncing back with another double point finish. Fernando Alonso was seventh and Stoffel Vandoorne eighth.

Marcus Ericsson ended a long-standing points drought to claim ninth place in the Sauber, ahead of Force India’s Esteban Ocon who had to work hard for the final point.

It was another grand prix to forget for Williams with Lance Stroll and Sergey Sirotkin way off the pace and last of the cars still running at the end of the 57 laps, in 16th and 17th respectively.

At the start, Vettel held his advantage from pole, but behind him Bottas made a better start than Räikkönen and stole second through Turn 1. Ricciardo was briefly passed by Gasly but the Australian quickly retook the position.

It all then began to unravel for Red Bull. Ricciardo slowed as he approached the end of the first lap with an electrical failure and pulled over at the side of the track to retire.

Further back, in midfield, Verstappen was charging forward from his 15th place starting position but as he began the second he tangled with Hamilton, with the Dutchman sustaining a punctured rear left tyre as he collided with Hamilton’s front wing in Turn 2.

Verstappen eventually made it back to the pit lane and after taking on a new set of supersofts rejoined in 19th place. It was a brief bit of action, though, and on lap three he pulled over and stopped his RB14, the damage from the collision with Hamilton preventing him from continuing.

By lap 10 Vettel had carved out a three-second lead over Bottas, with Räikkönen a further three seconds back. Behind them, Hamilton had staged a remarkable fight back from ninth place at the start, and from his bruising battle with Verstappen, and was now up to fourth ahead of Gasly and Magnussen.

Vettel pitted from the lead on lap 18, taking on a set of soft tyres, with Hamilton 10.2 seconds behind the Ferrari driver and in fourth place. Räikkönen followed his team-mate a lap later, rejoining 2.5s behind Vettel.

Bottas now led from Hamilton, but on lap 20 Mercedes covered the Ferrari stops and brought the Finn into pit lane. He also emerged on medium tyres, splitting the Ferraris as he had through the first stint.

Hamilton, who had started on used soft tyres and had not made a pit stop, was now in the lead, five seconds clear of Vettel, with Bottas third ahead of Räikkönen, Gasly and Magnussen.

Hamilton was soon caught by Vettel on fresh tyres, and Mercedes quickly pitted the Briton. He took on medium tyres, targeting a one-stop race, with Vettel set to make a second stop. Hamilton rejoined in fourth, some 25 seconds adrift of Vettel, with Bottas second and Räikkönen third.

Ferrari then pitted Räikkönen for a second stop on lap 35 but there was trouble for the Finn as the rear left wheel failed to come loose. There was confusion and when the Finn was released he collided with one of his crew, who had to be taken to the medical centre for checks. Räikkönen was told to stop in pit lane and the Finn quickly climbed out of the car and exited the race.

That boosted Hamilton to third and by lap 45 he was 16.7s behind Vetted. Ahead, Vettel’s problem was Bottas, who was secure in second, some seven seconds behind Vettel and setting good times on his medium tyres. The proximity was forcing Vettel to push to the end on his soft tyres and Bottas was given the message to close the German down.

With nine laps remaining Bottas was 5.4 behind the German and lapping half a second quicker than the Ferrari man. Behind the Hamilton was told to “keep his head down” and wait for Vettel’s tyres to fall away.

On lap 52 of the 57 Bottas had carved a further two seconds out of the gap to the leader and was told to “just push to the end” as Vettel began to struggle on his degrading soft tyres.

The German wouldn’t be denied, however. Bottas attacked with a lap remaining but Vettel held firm and though he was shadowed to the flag by the Mercedes driver in a tense finish, he crossed the line to score his 49th career win just over half a second clear of Bottas and 6.5s clear of third-placed Hamilton.

Drive of the day though, should have perhaps gone to Gasly. In just his seventh grand prix the Frenchman handed the new Toro Rosso-Honda partnership 12 valuable points with a superb, pacey and precise driver to fourth place.

Behind him Magnussen opened Haas’ 2018 account with fifth place ahead of Hulkenberg and Alonso and Vandoorne. Ericsson delivered a positive result for Sauber with ninth place and two points and the final point on offer was taken by Ocon. 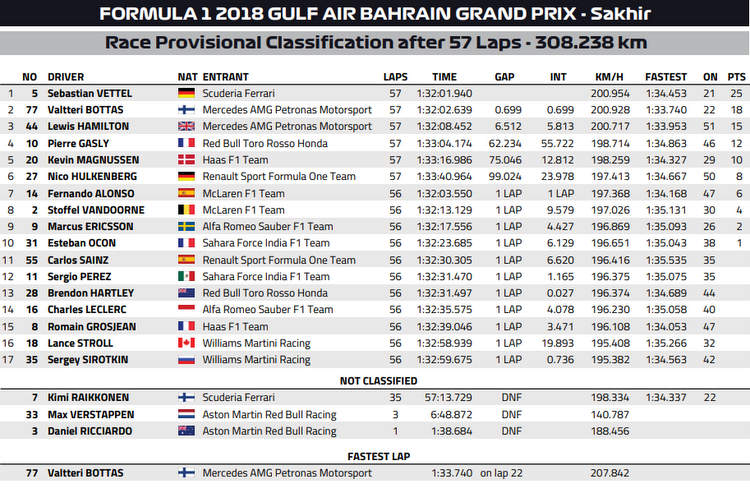 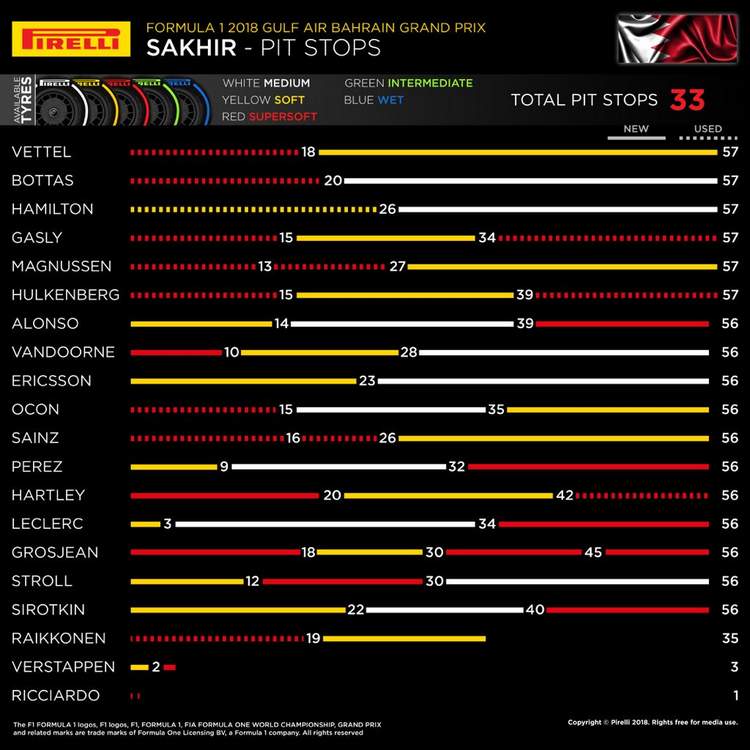 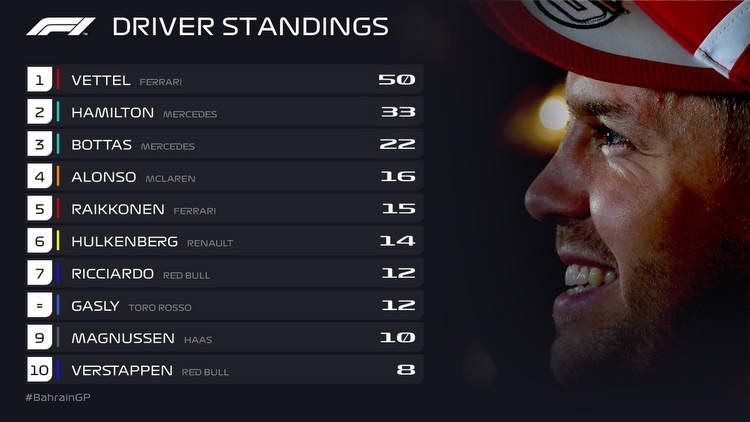