Boullier: Red Bull did a better job than us 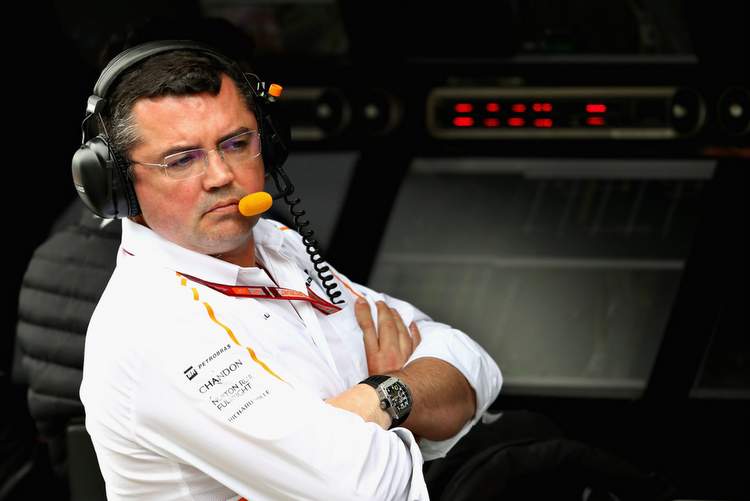 Much was expected of the new McLaren-Renault partnership, the Woking outfit often boasting last year that they had the best chassis on the grid – better than Red Bull even – but only hampered by the woeful Honda engine and thus team have been fired up by the prospect of running at the sharp end of the Formula 1 field once again.

At the season-opening Australian Grand Prix, both McLaren drivers, Fernando Alonso and Stoffel Vandodorne, qualified behind the Renault duo and both Red Bulls.

The qualifying deficit between Alonso in 11th and best placed Red Bull of Max Verstappen, in fourth, was 1.2 seconds, while Alonso’s gap to the best Renault in Q2 was just over half a second.

In the race, the Renault’s were not impressive and while the Red Bulls were better – some estimate a second up on McLaren – it took a gritty drive by Alonso to fifth place to split the energy drinks duo on the final results sheet.

Crossing the finish line seven seconds behind the Spaniard was teammate Vandoorne in ninth, a renaissance of sorts but by no means the full monty.

After three years of no benchmark, going solo with Honda, they now have Red Bull and Renault to measure up against and on the evidence of the Australian Grand Prix weekend the McLaren MCL33 was nowhere near Red Bull’s RB14 and the jury is out on whether the orange cars were any better than the Renaults.

Asked by BBC about the comparisons, speaking in the wake of the season-opener in Melbourne, Boullier explained, “Fighting with Red Bull – that was last year and based on data…”

“Then over the winter, you don’t know what the others are doing. Obviously, Red Bull have I would say one of the best chassis. They did a better job than us.”

Despite making the call to ditch Honda last year, it was late in terms of the development of the MCL33 for the 2018 season.

Boullier admitted that they could have done with more time, “That is one of the reasons why we are not where we would have been in an ideal world.”

And revealed, “We pushed the limits a bit too far. We underestimated the integration of the Renault and the energy we had to spend on this so we were definitely not prepared enough when we turned up in Barcelona. We are just about to be prepared when we came here.”

“We pushed too late. We decided to keep the same strategy but we changed the engine. Everything we wanted to do [in terms of car design] if we had stayed with the same engine, we did it.”

McLaren have updates planned for Bahrain with a redesigned nose expected to break cover during the Spanish Grand Prix weekend, but their rivals will not be sitting still.

Nevertheless, BBC persisted and asked: If McLaren could match Renault last year with a weaker engine, why are they not ahead this year with the same one?

“Because Enstone made a big step You need to explain to your readers how F1 is working, because Enstone has more people than us today,” replied Boullier.

Again why the shortfall in the light of the well-publicised winning ambitions the team harbour?

“Then we need to ask everybody to put some money in the team,” added the Frenchman with a laugh.

He went on to explain that Bahrain’s Sheikh Mohammed bin Essa Al Khalifa, head of the Mumtalakat sovereign investment fund that controls McLaren, has already shelled out on behalf of the team, “He already put in a lot.”

“It is just a question of ambition and resources. I am not hiding behind any excuse. They just did a better job,” Boullier repeated.

“I seriously believe that gives us a few races and we will show you we are the fourth team. It’s just we had to delay the introduction of many upgrades and that’s the issue we have today and that’s it.”

“If we’re 0.9 of a second off Red Bull, that wouldn’t look good, I agree. We don’t want to hide. It’s show time. I would say the same. We have the same engine, we should fight with them. If we don’t, it’s not good enough. Simple as that.”

The Red Bull target is extremely ambitious considering the often proven rate of development the energy drinks outfit are capable of during the course of a season. They reportedly also have about $50-million in their budget than McLaren has, as well as a more staff at Milton Keynes than they do at Enstone.

But Boullier is adamant, “You have to set targets in life. That’s it. I’m a competitor. If not, I should not be here. We are living in a realistic world and money in F1 is one of the conditions to be performing.”

“We are where we are and we have to do the best we can with this level – if not better. We know we can punch above our weight, and I think we will show you this. I can’t promise [it] putting both hands in the fire.”

“It is a question of putting everything together and not being any more delayed. So trying to bring everything back on schedule. But I think we will punch above our weight. Seriously,” concluded Boullier.

Big Question: Will McLaren be in Red Bull’s league by the end of this season?