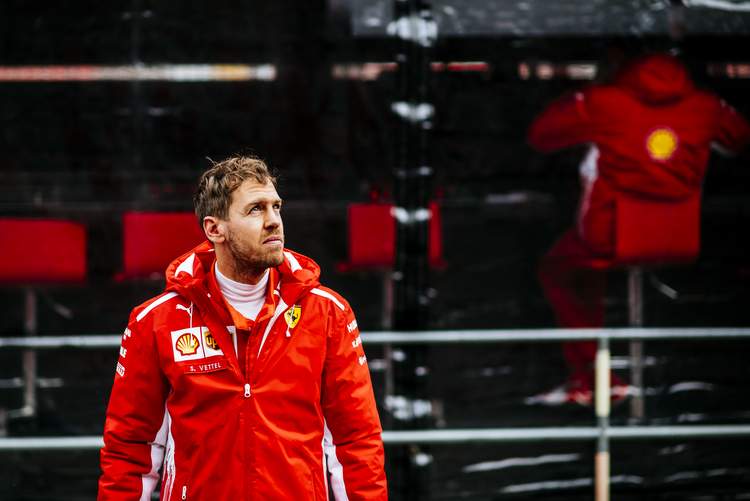 Ferrari have not won a Formula 1 World Championship title since 2007, expectations are high not only within Maranello and their Tifosi, but also the whole of Italy who will not have Gli Azzurri to shout for on the World Cup this year and thus will be banking on their beloved Reds to deliver on track.

The man tasked with bringing home the title for Ferrari is Sebastian Vettel who finds motivation from these expectations that surround the legendary team, while revealing that he is an avid lawnmower man!

In a wide-ranging interview with Sportbild, Vettel was asked if the expectations around the fabled team was pressure or motivation for him, he replied, “Motivation. I put that pressure on myself.”

“It is important that we stick together as a team and have a plan. Everyone at Ferrari gives all they have for success, they are extremely motivated, you can feel the passion that people have for Ferrari as a brand. And everyone sacrifices personal interest to help pursue success for the team.”

“Enzo Ferrari once said: You can not describe passion you have to experience it. Red is just a colour, but it is one which stands for Ferrari in racing and in Formula 1 and is something special again. The stuff that makes you weak at the knees.”

Asked if at 30 years of age, with four F1 world titles to his name, how he found motivation at the start of each season, he replied, “There is still that hunger for more that keeps you going. It’s not a question of age, it’s up to you to decide to what extent you’re still fast enough to be at the front.”

As for more titles, specifically with Ferrari, Vettel said, “I do not look so far ahead. I think it’s very important to stay cool and sober. If you over-think it, always pondering how to get to your destination faster you may miss important steps and then you realize that you are not there, where you want to be. That’s why I’m a step-by-step person.”

Lewis Hamilton versus Sebastian Vettel was a tasty contest last year and looks set to continue this season as both Ferrari and Mercedes appear to have impressive cars at their disposal.

Asked for his opinion on his archrival and nemesis, Vettel ventured, “Lewis is a four-time World Champion and one of the best F1 drivers… He is an opponent on the track, but not in life.”

“Honestly, it does not matter to me who I am driving against, but if you win against Lewis Hamilton or Fernando Alonso at the end feels better, you’re proud of it. You know that the level at which Lewis or Fernando are on is extremely high.”

Much has been written about Vettel’s headline-grabbing rant and actions during last year’s Azerbaijan Grand Prix, when asked why he is so emotional in the cockpit he explained, “Everyone can judge those who make mistakes. Of course, you should not cross certain borders, but this happens sometimes in life.”

“If this did not happen would life be so worth living? Not for me. I think it is also interesting for other people to be able to form their own opinion in each situation and make their own judgment. If I get criticised after that, I have to live with it, life goes on.

He also gave insight on how he deals with criticism, “Example Singapore: The evening in Singapore was not so easy to digest. Especially because I could have finished the race much better. That was the main lump I had to chew on.”

“The situation and how it arose, I was pretty clear… That’s when I reacted the way I reacted. Was that wrong? Could I have done better? This question can often be asked, but it happened.”

The Formula 1 landscape has changed massively since Vettel broke onto the scene when he made his debut for BMW at the 2007 United States grand prix and in the wake of the big changes to the sport (such as the Halo and grid girls ditched) he was asked if he still enjoyed being an F1 driver.

He replied, “Yes, because I still love driving at the limit with the fastest cars in the world and in a Ferrari. The halo may not look good, but the pros outweigh the cons from a safety aspect. If only one life can be saved by the Halo, it has already proven itself to be worthy.”

“As far as the grid girls are concerned, I can live well with kids in front of our cars like in football which they have been doing for years. Players come on to the playing field with children. It’s a good idea to do it now in Formula 1.”

As for the danger of the sport, he said, “I’m not afraid of the car. I feel very safe when I am sitting in the car, directing the steering wheel and deciding what to do. You have to respect safety which is quite normal.”

“You can feel the high speeds in the car, but you do not imagine what you might risk or what could happen if there is an accident. It can always happen because you are constantly at the limit, but I’m not afraid of that.”

Finally, it was interesting to learn that Vettel, a man recognised as one of the best race drivers of his generation racing the fastest multi-million dollar cars on the planet, admitted, “Lawn mowing gives me satisfaction. I have a small lawn tractor. When I mow the lawn and it looks really neat, then I’m really satisfied.”

Big Question: Can Seb and Ferrari do the business this year?