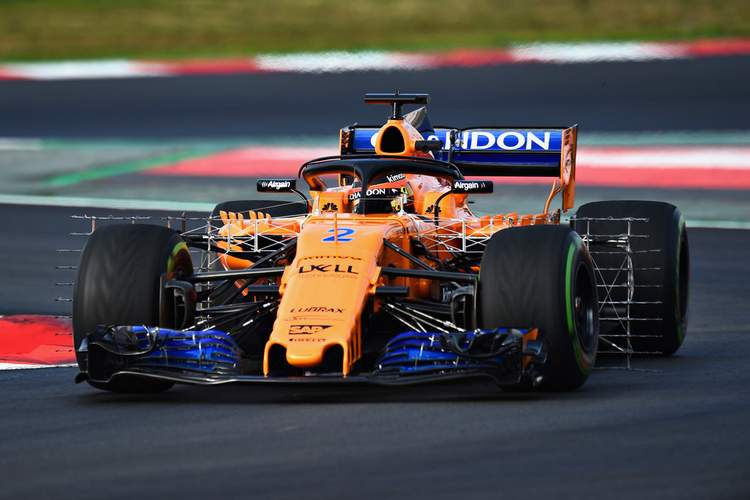 An interrupted session for McLaren at the second day of pre-season testing as Stoffel Vandoorne got behind the wheel of the MCL33 for the first time. Conditions all day have been much colder than expected, with track temperatures well below the ideal operating window for both the car and tyres.

Given the weather, the team opted to run a number of installation laps in the morning in order to gather important correlation data and perform systems checks – necessary test items that can still be completed in adverse conditions.

Around lunchtime, the team detected high temperatures under the bodywork, caused by a broken exhaust clip leading to hot air being blown back into the car and onto the wiring loom, which includes the brake line. The team opted to strip down the car to perform further investigations as a precaution.

Once happy with the investigation and subsequent repair, the car was again readied to return to the track, but the team opted not to run just before the flag dropped due to the worsening weather conditions.

Stoffel completed 37 laps and clocked the third-quickest time of the day.

Stoffel Vandoorne: “It was very nice to get back in the car after the winter break. It felt like I hadn’t left the cockpit so that was positive. What mainly held us back this morning were the weather conditions – it was a very cold and damp circuit which meant it took a while to get the running started for everyone. We took the opportunity to do some rake work and gather some aero data, and after that the track started to be in a reasonable condition, so we could do a few proper runs and try to understand a bit more about the car. The first impressions were very positive. I felt comfortable, there were no surprises and we got some good learning done. Unfortunately, we had a small issue with the exhaust clip at lunchtime, which detached the exhaust and blew a lot of hot air onto some of the wiring looms – one of which is the brake. The team did some precautionary checks which obviously meant that things took a bit longer than expected. All in all, it wasn’t a big problem and it’s been a positive day with a lot of things learned about the car. The snowy conditions are not very representative of what we will get during the season, so it’s very difficult to read into performance at this stage.”

Eric Boullier, Racing Director: “Today was one of those days where circumstances beyond our control affected our running. Stoffel had a very positive morning, quickly getting acquainted with the MCL33, performing vital checks and collecting essential data that can be sent back to the factory for analysis. Due to the weather conditions Stoffel wasn’t able to fully stretch the legs of our new package for any length of time, but we adapted our run plan to our advantage and were still able to gather a lot of valuable data that will inform the rest of our test programme. It’s a shame that a minor issue such as a broken exhaust clip meant that we spent much of the afternoon in the garage doing in-depth checks on the car, but it was the only option we were prepared to take given the proximity to the braking system. We decided that running the car again at the end of the session was not worth the risk given the impending snow, so we are busily crunching the numbers and hope for a better day tomorrow. As for tomorrow’s running, the forecast looks much the same as today with more snow predicted. We’ll make what we can of the situation and adapt our run plan accordingly to glean the data we need.”

What’s next? Fernando returns to the MCL33 cockpit tomorrow for day three of testing.