Webber: Best thing Ricciardo can do is beat Verstappen 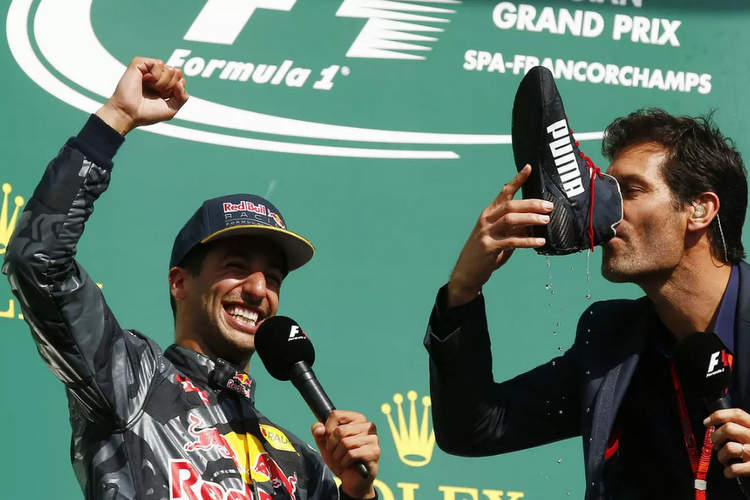 Mark Webber knows a thing or two about politics at Red Bull and with that in mind he has only one piece of advice for his fellow Australian Daniel Ricciardo: beat Max Verstappen.

Webber, who was a Red Bull driver for seven years of which the final four were packed with conflict and intrigue as he tussled – on track and off track – against teammate Sebastian Vettel.

The German was seen as the team’s favourite son, and as a result, Webber was eventually reduced to a secondary role as Vettel wrapped up four world titles in a row while they were teammates.

Now a similar scenario is panning out with Ricciardo and Verstappen, the young Dutchman seen as the driver to lead the team for the next three years. A deal to such effect is done and dusted, while Ricciardo has yet to commit to extending his contract with the energy drinks outfit beyond 2018.

Webber failed to match or contain Vettel during their years as teammates, but he still has advice for Ricciardo, “I think the best thing he can do is beat Max. That’s the best thing he can do. Which he knows, and he’s going to do his best to do that. If he wants to try and have a crack at that for five-six months, then look at the options.”

Much has been written about Ricciardo’s reluctance to ink a deal until he is sure that the Red Bull package will be a front-runner not only in 2018, but also in 2019 and thereafter.

Should he look at opportunities on the grid for the near future, it is clear that anything other than Ferrari or Mercedes would be a step backwards in his career. Interestingly either option for Ricciardo is possible and realistic too.

Ricciardo has been mentioned in the same breath as Ferrari for a number of years and is likely to remain so until a decision is made. Nevertheless, Vettel permitting he would be a very strong option for Maranello to replace Kimi Raikkonen at the Scuderia beyond 2018.

As for the Mercedes option. which would mean replacing Valtteri Bottas, Webber said, “That’s like dog’s balls, everyone can see that coming. There’s an obvious link — they’re both out of contract, he’s a top-flight driver and there’s a chance for a switch.”

“I don’t think Mercedes will be rushing to make a decision either, they’re going to keep a good eye on Valtteri and see how he’s performing, probably until Canada.”

Ricciardo’s third option is to simply stay with Red Bull which the team is keen to have happen as they are well satisfied with both their drivers.

Should Ricciardo extend with the energy drinks outfit, Webber predicted, “Red Bull will support the guy that’s leading the championship and doing the business. If that’s Daniel, I reckon he’s still in great shape there, to be honest, because he is a Red Bull product.

“I don’t think Helmut would be disappointed to see Daniel as world champion. But he loves Max as well. They’re both his favourite guys. But if he’s beating Max and Red Bull are flying again, why would he leave?”

“At the end of the day, I don’t think Dan’s too bothered what colour the car is. He just wants to win. That’s what he’s aiming to do, and it’s hard to win consistently. They don’t hand them out. He’s totally capable of it, but he’s just got to find himself in a position where he can get that opportunity,” added Webber.

Big Question: What’s the best option for Daniel beyond 2018?