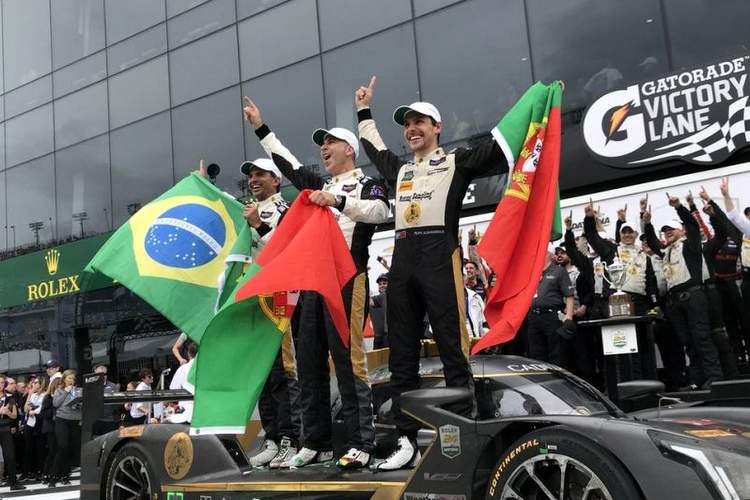 Many racing fans followed Fernando Alonso’s adventure at the Daytona 24 Hours, but it was actually former Formula 1 drivers that were the stars of the 56th running of the endurance classic.

Alonso’s debut ended in 13th place during a race pock-marked with problems for the Spaniard and his teammates Lando Norris and Phil Hanson driving the United Autosports Ligier LMP2.

But other former Formula 1 drivers in the field showed strongly with former Minardi and Footwork driver Christian Fittipaldi powering to victory in the Mustang Sampling Cadillac DPi-V.R co-driven by Portuguese duo Joao Barbosa and Filipe Albuquerque, the team covering a record-breaking 4586km during the 24 hours.

Fittipaldi said, “I think it’s huge. Especially after what happened last year. It went the way it went, but obviously, we didn’t swallow it that easily. It has been in our throat for 365 days. I remember going into the press conference and sort of mentioning: Now, I have to wait another 365 days for a shot at it, and this is what we did.”

As Fittipaldi referenced, the win avenged the team’s bitter defeat in the 2017 race, when late-race contact between Ricky Taylor and Albuquerque while battling for the lead in the final minutes of the race.

Second place went to the Whelen Engineering Cadillac DPi-V.R team which featured former Sauber F1 driver Felipe Nasr in the line-up along with Mike Conway, Eric Curran and Stuart Middleton. Nasr posted the fastest lap of the race with a time of 1:37.475 set during his stint on lap 331.

Former Toro Roso driver Sebastien Bourdais was part of the Ford Chip Ganassi Racing team, which dominated the GTLM class, crossing the finish line one-two on Sunday afternoon. Bourdais was in the car that finished second, with co-drivers Joey Hand and Dirk Müller.

Kevin Magnussen’s father Jan Magnussen, who made 24 starts in Formula 1 during the nineties, was part of the formidable Corvette effort. The Dane qualified the C7 on pole in the GTLM class and with Antonio García and Mike Rockenfeller went on to finish third in class behind the Fords.