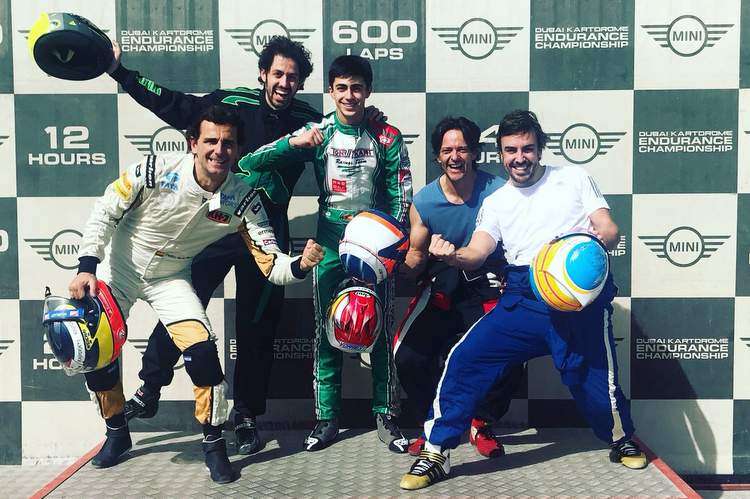 While his Formula 1 peers enjoy their winter break in exotic locations, chilling and relaxing, Fernando Alonso will be doing what he loves most: racing!

The event is the final race of the tightly contested four round Dubai Kartdrome Endurance Championship, the finale the flagship event which attracts drivers and teams from around the world.

Alonso, who spends a large part of the year in Dubai, is no stranger to the event having competed in the past, but this time around the McLaren driver is targeting the prestigious Nations’ cup and by all accounts, an outright victory is also on his wishlist.

The race, which starts on Friday, is expected to draw 30 teams and is run using identical Sodi karts and is part of the Sodi World Series (SWS).

Kartdrome manager David Bright said ahead of the race, “It is great to have Fernando and Pedro on the grid with their team. This time around they are taking it all much more serious than they did in the past. They will be the team to beat in the Nations’ Cup and could also surprise the favourites when it comes to overall honours.”

Clerk of the course Joao Gouveia added, “FA Racing and Alonso will get no preferential treatment and in fairness, they have never ask for any. Their presence for sure adds interest to the race, which is a true test of endurance for everyone who competes.”

In 2015 Alonso and his team, which consisted of Stoffel Vandoorne and his race engineer Andrea Stella, finished 11th in the race and scooped the Best New Team Award for their efforts.

Alonso will also compete, in January, at the Daytona 24 Hours driving a prototype Ligier for United Autosports, while a Le Mans foray may also be on the cards as he targets the elusive Triple Crown of motorsport.