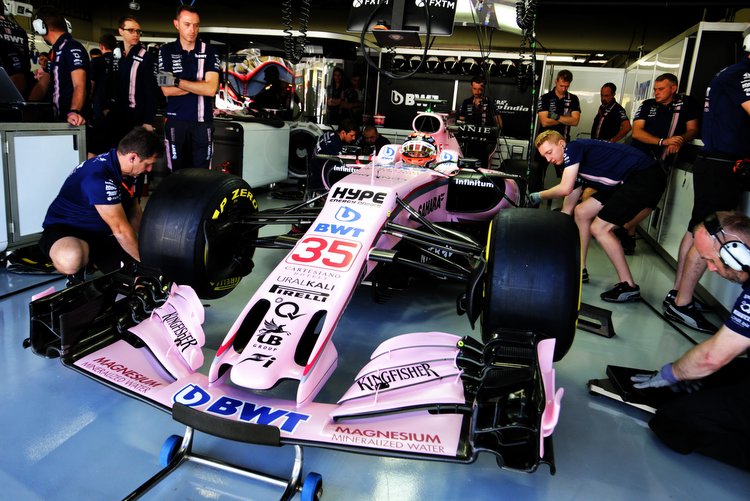 As the end of the season approaches, the arrival of updates at the track is less pronounced, with teams now focusing most of their resources on their 2018 challengers.

This was very much the case in Brazil, with only a few teams bringing some minor developments. However, at this stage of the year, Friday practice is often used for experiments focused on 2018, and Renault conducted an intriguing test with different helmet designs (see below).

In Mexico, Renault introduced new cooling louvres either side of the cockpit, with each element featuring a U-shaped cut-out – these were retained for Brazil. The purpose of the team’s update in this area is to improve the extraction of hot air from within the sidepods and the engine cover. 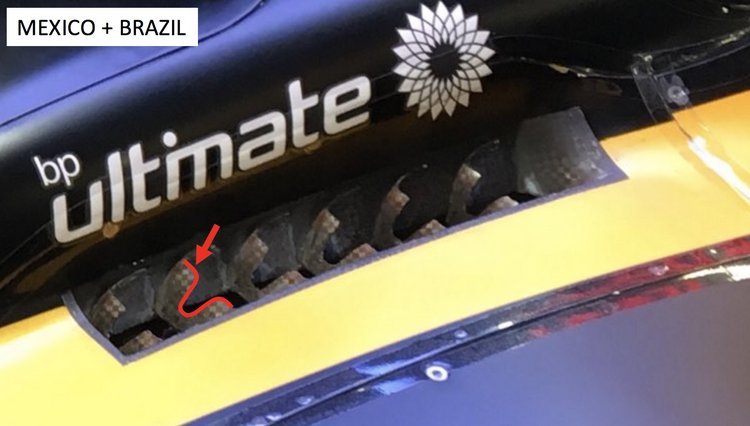 Removing the louvres completely would reduce internal temperatures sufficiently, but with the proviso of less efficient airflow over the sidepods. The louvres guide the exiting air rearwards, so it has less of a vertical velocity component, reducing the possibility of airflow detaching from the sidepod’s sloped upper surface, which would increase pressure drag. In this case, it appears as if Renault has attempted to find the best compromise of these two concepts.

Secondly, during FP1, Hülkenberg tested two different helmet designs, one with a rear fin (standard, pictured below), and one without, as the team most likely looked for the design which minimised losses in total pressure where the current airbox strut is situated. This can be deduced from the fact that a series of Pitot tubes were attached to the strut during the helmet tests (not shown here), measuring the total pressure of the flow at various points along it, by bringing the oncoming air to rest. 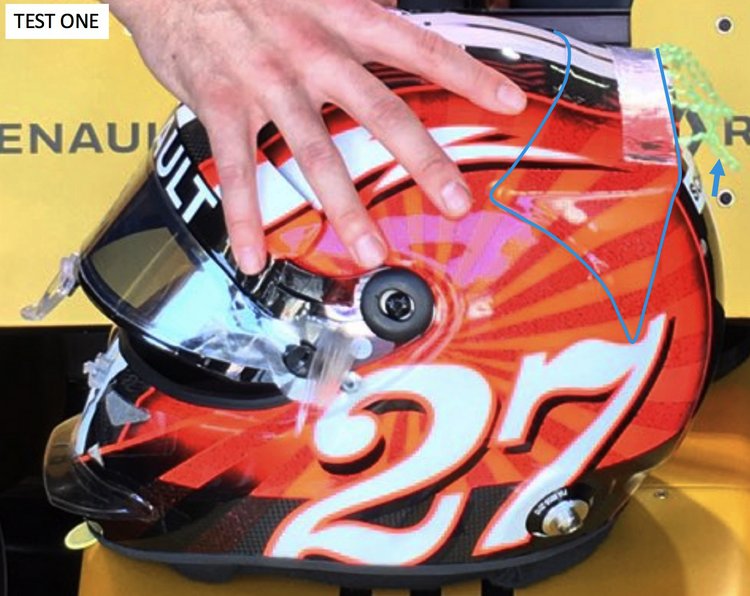 Airbox designs, including cooling and combustion air inlets, would have been signed off by this stage in the year, so the fact that there are Pitot tubes around the airbox strut suggests that the R.S.18 will feature an air inlet in this area. Guidance on the flow patterns was given by the wool tufts present at the rear of the helmet, a flow visualisation tool often used in wind tunnels.

Haas has continued its 2017 development programme very late into the season, even more so than its midfield rivals. For Austin, a major upgrade around the sidepod and bargeboard area was introduced, while in Brazil, a revised T-Wing was run throughout the weekend. In spite of this, the team actually believes it halted the VF-17’s development too early, in order to focus on major changes for next year’s challenger.

With the knowledge that the T-Wing will be outlawed for 2018, it would not have been expected that any team, let alone one of the smaller outfits on the grid, would be bringing a new version of it at this stage of the championship. However, with the battle for sixth in the Constructor standings set to go down to the wire, and given the low cost of manufacture of a T-Wing, it does, in some ways, make sense that development in this area has been continued. 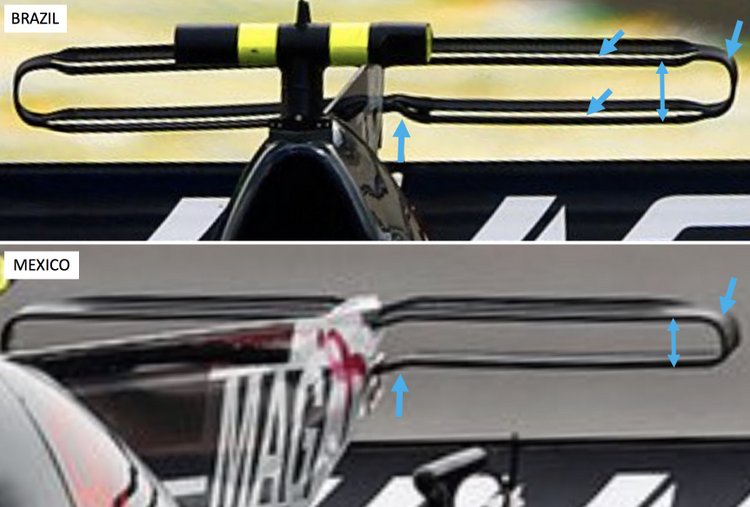 The new edition is substantially different from that first introduced in Monaco. It features elements with full length slots in order to improve the consistency of airflow attachment to the underside of them. The upper element’s AoA appears to be unchanged, while that of the lower section has been increased, the result of which has been a greater separation of the upper and lower elements in order to guarantee clean airflow to both.

The consequence of these changes will be greater downforce consistency from the top element, at the expense of a little load, while the lower element should produce more downforce, although its benefit in this regard will be reduced by the introduction of the slot. Note that the greater height between the sections required a revised inboard region for the lower element such that it could be attached to the shark fin without the need for new mounting points. In addition, the shape of the endplates was tweaked in order to minimise drag.

Force India brought a significant upgrade to the Mexican GP, which it continued running in Brazil. The size of the update is surprising given the stage of the season, but any data gathered will be useful for the design of the VJM11.

Firstly, the number of vertical bargeboard elements was reduced by one to nine, while the upper edge of each of these was revised. Replacing the most rearward of the old bargeboard elements is a new, tall airflow conditioner, much like the one on the Mercedes, for example. Meanwhile, the lower bargeboard element has been completely redesigned, now being reminiscent of the designs on the Ferrari and Red Bull. 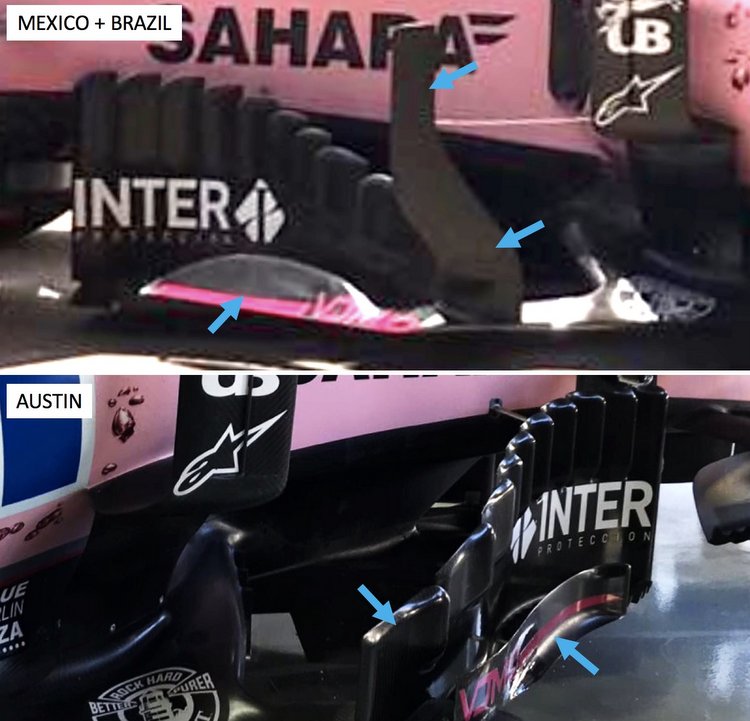 All of these changes will have been aimed at reducing the negative effect of the front tyre wake on rearward Aerodynamic performance. The base of the new airflow conditioner is a little offset from the main bargeboard in terms of its positioning and outboard nature, as the team looks to optimise the outwash from this area of the car to push the wheel wake as far outboard as possible. The new lower element on the bargeboards would have been designed with similar effect.

The top part of the new flow conditioner has a subtle wing-shaped cross section to it (not shown here), the result of which would be the production of a vortex at its trailing edge. This would bring some order to the top part of the front wheel wake, reducing its chaotic nature.