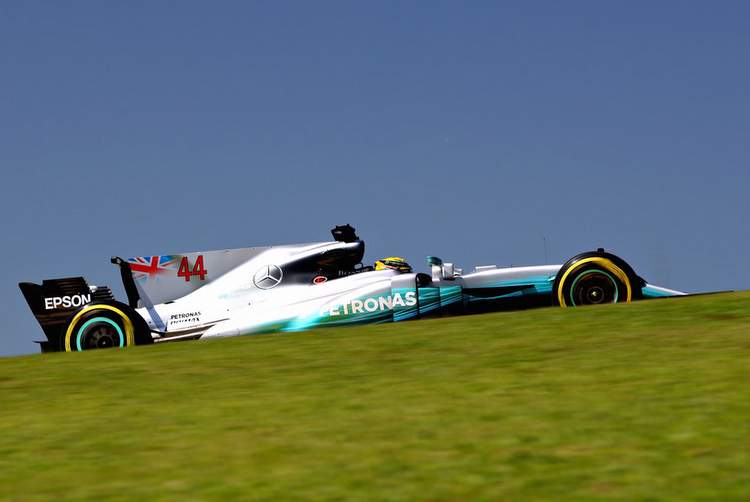 Mercedes dominated the top of the timing screens at the end of the first free practice session of the Brazilian Grand Prix weekend, with Lewis Hamilton fastest and his teammate Valtteri Bottas second best.

Fresh from clinching his fourth Formula 1 World title two weeks ago in Mexico, Hamilton set a best lap time of 1:09.202 to claim top spot in the ninety minutes morning session. Bottas was a tenth shy of his teammate’s top time.

Hamilton is adamant that he will not take his foot of the gas in the remaining two races, despite the fact that he has already bagged the title. He says he is still “in the zone” and the reality of winning 2017 title has yet to sink in.

Kimi Raikkonen was third fastest in the Ferrari, albeit half a second down on Hamilton’s best, with Mexican Grand Prix winner Max Verstappen fourth fastest – a mere six thousandth of a second down on Raikkonen – on a bright sunny day at Interlagos. His Red Bull teammate Daniel Ricciardo was fifth fastest, less than a tenth off the Dutchman.

In the other Ferrari, Sebastian Vettel had a subdued morning, in terms of lap times, and ended the session in sixth place, six tenths down on the benchmark time.

Best of the rest in seventh was Felipe Massa showing handy pace and competing in his final grand prix (this time for real) on home soil. Stoffel Vandoorne eighth quickest with McLaren teammate Fernando Alonso rounding out the top.

Splitting the orange cars on the timing sheets was Force India’s Esteban Ocon in ninth. Mercedes protege George Russell did FP1 duty in Sergio Perez’s pink car and gave account of himself to end the session in ninth.

The final three races with Renault power are proving to be a nightmare for Toro Rosso who have been plagued with ongoing engine issues in the latter half of this season.

At Interlagos the problems hit a new low as both Pierre Gasly and Brendon Hartley were again on the receiving end of engine related gremlins. Gasly had to end his session early due to an MGU-H issue, while Hartley’s car came to a smoky end, also with a suspected power unit problem.

Gasly and Hartley managed only six laps between them on a morning where Bottas did 43 laps. Team insiders have suggested (in whispers) that the move to Honda cannot come any sooner…

Ferrari young driver Charles Leclerc, who was on duty for Sauber in place of Pascal Wehrlein, finished 17th quickest and faster than the team’s regular driver Marcus Ericsson. 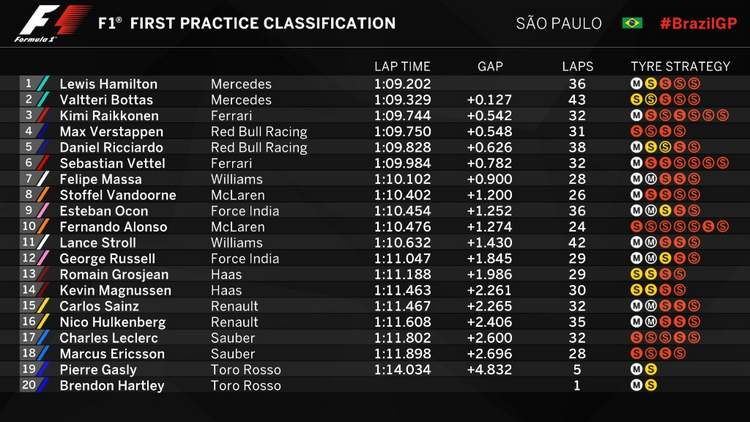