Inside Line: Verstappen a victim of stewards’ inconsistency 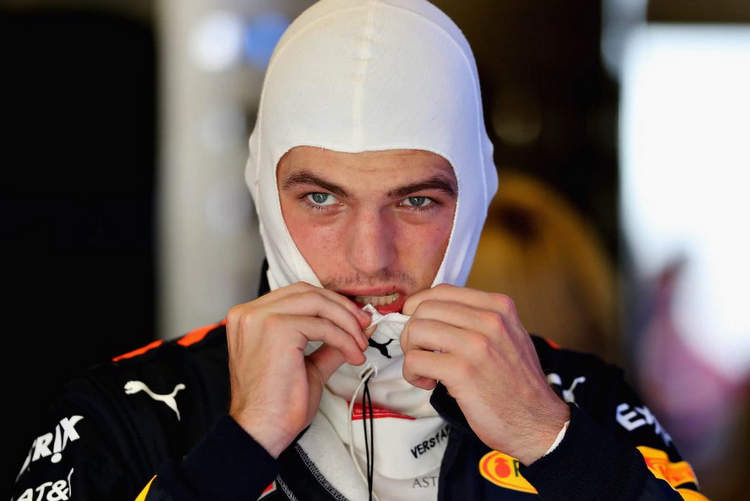 Once again young Max Verstappen is hogging column inches in the aftermath of his storming drive at the United States Grand Prix.

In a nutshell the facts are these: At Circuit of the Americas, Verstappen started the race from 16th on the grid. Early on he scythed through the field in the attacking style that has become his trademark.

There came a point when the young Red Bull driver sniffed a podium and was relentless in his pursuit of it. In the final laps he came upon the Ferrari of Kimi Raikkonen in third place.

He harried and hustled the veteran Finn, on the final lap he pounced through the Turn 17 complex. The Red Bull was fully on the kerb as it squeezed past the Ferrari at high speed. It was riveting stuff from the Dutchman. He did it! He had snatched third place with a daring move and for sure the podium was his…

But no, the race officials deemed the following: 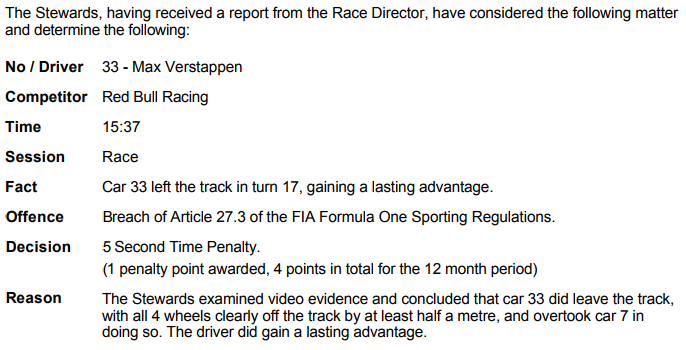 It was a decidedly awkward moment when Verstappen saw Raikkonen enter the pre-podium room and realised at that moment that he would not be celebrating on the podium. Shaking his head and with a sliver of a wry smile he left the room.

Thereafter his anger, that of his Red Bull team and his father Jos has been well documented. But the harsh reality was: a well earned third place turned to the disappointment of fourth place.

The 20 year old has often been compared to the late Ayrton Senna, but he rightfully insists that he is Max Verstappen, creating his own legacy in Formula 1. Whatever the case the similarities beteen him and the great Brazilian are chillingly obvious.

It is understandable that Verstappen is aggrieved that his heroics in Austin have been castigated. Victim springs to mind.

Of course, there is no question that he cut the track, ample evidence is available to confirm this, but this is not the issue; the question is: why the inconsistency?

Just about every driver abused the track limits during the course of the race. Unfortunately COTA does not punish wayward drivers, well placed sausage kerbs are perhaps the only solution. But that’s another story…

The crux of the matter is the inconsistency of race stewards and not for the first time this year their decisions or lack thereof are questionable.

After the race Verstappen blatantly declared that he is being victimised by regular race steward Garry Connelly, but in this instance the fury appears to be misdirected because Mika Salo, another steward on the day, told Ziggo Sport that the call was instigated by no less than FIA race director Charlie Whiting.

But this still needs to be confirmed by the man himself and if indeed he did this opens an entirely new can of worms… Watch this space!

The inevitable questions are  what were the stewards doing when the following incidents occurred during the race:

In the light of a race packed with track limits infringements, singling out the Driver of the Day for his audacious overtake is harsh, not only for Verstappen but for every fan (most of us surely) who jumped in their seats or couches cheering the youngster’s chutzpah and bravery.

Inevitably disdain for F1 officialdom will only mount in the wake of this incident, while Verstappen’s detractors – and there appear to be many – will perhaps cherish the decision and provide appropriate reasoning.

In the heat of the aftermath, Verstappen said he hoped that fans would stay away because of the decisions made. Alas this will not happen because fans want to see racing and as long as Verstappen is on the grid we can expect fireworks. He is a draw-card no matter where your allegiance lies

That’s the way he rolls and whether you love him or loathe him he will deliver every time he is in the cockpit. He makes Formula 1 exciting.

This year I have privately questioned Whiting’s decision making along with the stewards he appoints for the races. In my opinion, this time in Texas, they blundered again with their inconsistency. Punishing great drives, such as the one Verstappen delivered, is a disservice to the sport and fans alike.

Immediately after the race Niki Lauda was critical of the decision, “Last year, when the stewards were punishing everything, we had a long meeting with Charlie Whiting and said: Let the racing drivers be racing drivers. I don’t understand why we have now gone back to the stone age with something that is bad for the sport.”

“This decision is the worst I’ve ever seen, he did nothing wrong. We’re racing drivers, we’re not on a normal road, it’s ridiculous to destroy the sport with this kind of decision,” added Lauda.

After watching videos could equally argue Kimi forced him there. Best overtake of #USGP. Feel sorry for @Max33Verstappen you got robbed @F1

Verstappen is a Formula 1 great in the making and I (along with everyone who watches F1) are privileged to watch this prodigy evolve every race day and, honestly, for me the parallels with Senna three decades ago are chilling similar. Savour these moments, these are the memories you will cherish years from now.

In closing, as a Formula 1 fan I am in the Andretti and Lauda camp of opinion – Verstappen was robbed on Sunday.

Big Question: Is the inconsistency of FIA stewards bad for Formula 1?