Ricciardo: I’d love to see myself against Hamilton in his prime 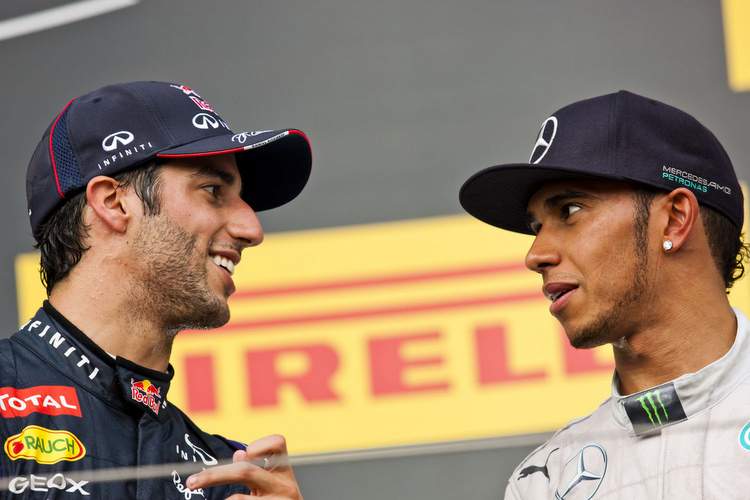 In the wake of Red Bull striking a deal with Max Verstappen until 2020, the focus has now shifted to Daniel Ricciardo’s future as the Australian becomes a free agent at the end of 2018.

Speaking to ESPN, Ricciardo revealed that he would relish teaming up with Lewis Hamilton should the opportunity present itself, “I’ve said for a long time [Fernando] Alonso or Lewis would be the guys I’d love to see myself against. Alonso’s getting towards the tail of his career so Lewis at the moment is more desirable for me to go up against. So I would like that.”

In 2014, his first year at Red Bull, Ricciardo was pitted up against four times F1 World Champion Sebastian Vettel. The big smiling Aussie beat the German, finishing third in the championship and winning three races that year. Vettel was fifth in the standings with no victories, and departed the team to join Ferrari in 2015.

Ricciardo said, “Obviously I had the chance with Seb, I’ve had it with Max and I’m going to have it again with Max for at least one more year. But while Lewis is in his prime I would like to challenge [him] and see…”

Despite the fact that Ricciardo is currently fourth in the drivers’ championship, while Verstappen is sixth with 81 points separating the pair, the young Dutchman has signed a contract extension with the team until 2020.

Red Bull chief Christian Horner believes they can build the team around the 20 year old. He also wants to retain Ricciardo, but where does that leave the man from Perth if the team focuses on the Dutchman?

Speaking after Verstappen’s new deal, Ricciardo mused, “His announcement has come really early as far as that all goes, because he was already contracted next year – he’s done it early. I guess they didn’t need to do it that early, but he has and that’s that.”

“Normally in the past people haven’t pulled the trigger that soon, so the only surprise is the timing, but I’m not surprised he’s stayed on because I know he likes the team a lot.”

“For me, no announcement is going to come any time soon, I think I’ve got time on my side to see how everything shapes up. It gives me time to not only focus on the end of this season but also the beginning of next year, put some emphasis on that. That’s kinda where my head is at at the moment.”

Indeed Ricciardo’s career has always been under the Red Bull umbrella. The energy drinks organisation financed his junior career, including his first foray into Formula 1 with the now defunct HRT.

At the end of 2018 Ricciardo is out of contract, an unusual situation for him, “It’s unique, definitely, something I’ve never experienced before. I’m kind of excited to see how it may play out, or how it may not. It’s something new for me and something exciting, but I’ll do it the right way in terms of what talks I have — I’ll be respectful and see where it ends up.”

“The positive with Max staying on is that it shows him and his team, him and his management, have a commitment to the team and see a good future with Red Bull. That’s encouraging for me knowing we have a pretty good foundation for next year. That’s why I’ll take my time and see how the start of next year goes.”

Beyond Red Bull, Ricciardo’s best options are Mercedes and Ferrari, with the latter sure to have a drive available in 2019 when it is more than likely that Kimi Raikkonen will retire.

A move to Ferrari would see him re-united with Vettel who recently committed to the Maranello outfit until 2020. The question is: will Vettel accept Ricciardo as his teammate?

The Mercedes option may transpire if Valtteri Bottas continues to be overshadowed by Hamilton, as he has been for the latter half of this season. The Finn has another season to raise his game, his deal with the Silver Arrows runs until the end of next year.

Much hinges on how Red Bull and Ricciardo perform next year, “If I can be in fast car, if I can be with a top team, that’s the criteria. That would be the biggest thing. As far as the outside things goes with Red Bull — I like the brand a lot and obviously I like the team a lot.”

“We’ve always been a good fit for each other so from that side it’s all been really good. But for sure the performance is the number one box to tick,” added the Australian.