Hasegawa: Ashamed I did not give Alonso a good engine 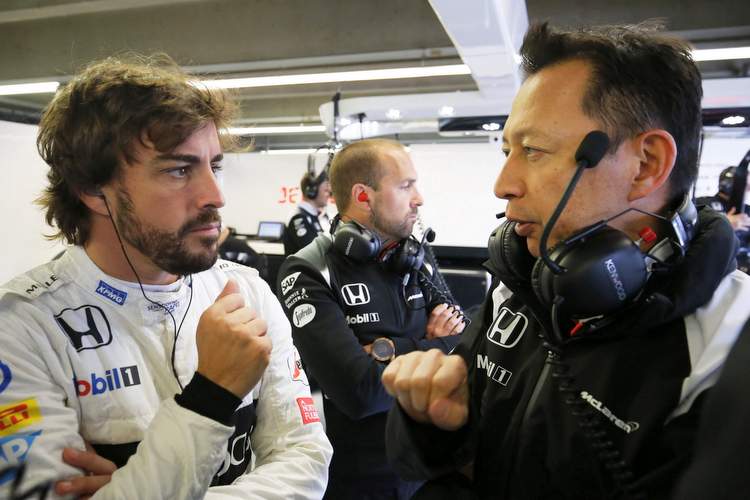 Throughout the problem packed past three years of the McLaren-Honda partnership, their star driver Fernando Alonso has made his dissatisfaction known which split opinions within the Japanese company’s management.

Honda F1 chief Yusuke Hasegawa admits he is embarrassed that he could nor provide the goods for the Spaniard to deliver results and victories on track, but also reveals that there were people within his organisation that did not take kindly to Alonso’s often harsh criticism.

In a startlingly frank and honest interview with El Confidencial, Hasegawa revealed, “Alonso always put pressure on me. If the car was going badly, he had no qualms about telling me he was not happy.”

“He is a good person, he probably felt very ashamed of having to scold me… but he had to do it. After all, he wanted everything to be right, that’s why I’m so ashamed.”

Many in the paddock accuse the Spaniard of being too political, but Hasegawa sees it differently, “Alonso criticised us because he was not satisfied, he had every right to do it.”

Often, as he grew more despondent and exasperated, with his lack of competitiveness, Alonso would be scathing in his remarks. Once he compared the engine to that of a GP2 car, and on another occasion bellowed “embarrassing, really embarrassing” into the team radio.

“Obviously, there are people at Honda who were not happy with Alonso’s attitude,” Hasegawa conceded. “But not in my case, for me it was not a problem. I am very disappointed that I did not give him a good engine. Personally, I am very sorry, I was embarrassed and angry. But in F1 it is difficult for everyone to be happy.”

The tension between Alonso and Honda exacerbated the problems, as Hasegawa explained, “There were no results, which was not good for internal harmony. From a professional point of view there were many problems, because he was never happy it is very difficult to establish a good working relationship.”

“Of course, it is not personal. Alonso did his job, as good a professional that he is. The drivers, after all, are very emotional guys and you have to understand them when they behave like that. If I had the best car, would Alonso not be happy? Yes, that’s why we cannot complain.”

In 2015 much was expected of the reunion between Honda and McLaren. The partnership enjoyed a golden era in the late eighties and early nineties with Ayrton Senna and Alain Prost. But times had changed in Formula 1.

“Expectations about Honda were so, so high … That was our big mistake,” admitted Hasegawa. “It’s not that the McLaren project did not work, we just did not live up to expectations. We were too ambitious and we were not really ready in 2015. We’ve improved, but the leadership was not expecting this.”

The lack of results and subsequent high profile split from McLaren has undoubtedly been negative to the Honda image in F1. Adding insult to injury is the fact that the proud Japanese company has had to shift allegiance from the sport’s second most successful team to the Red Bull B-team, Toro Rosso.

Hasegawa mused, “Honda’s identity is always about fighting, not surrendering, and we’re not going to do it, otherwise we would leave Formula 1.”

Indeed Honda stated that they are targeting the top three with Toro Rosso next season.

It was a big boast and will be a huge challenge to try attain, in the light of the fact that Hasegawa himself knows what Honda’s problems are: “Basically two things: one, that our engine has no power. And two, that the power we manage to extract is not delivered in a way that we like.”